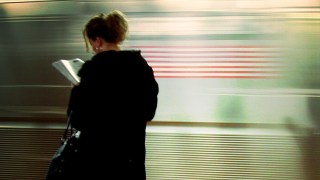 The Neurology of Reading

Reading may have evolved from early hunters’ skills of interpreting animal tracks, which allowed them to find food and determine whether they themselves were being hunted.

Question: What is happening in the brain when we read?

Margaret Atwood: The neurology of reading is another thing that people are writing about and investigating a lot.  That is, what is happening in your brain when you read?  It turns out because I know a friend who had this kind of stroke that you can have a kind of stroke that makes it possible for you to write, you can still write, but you can’t read what you’ve just written.  So reading and writing you would think would be in the same little box in the brain, but they’re not.

Anything that we do is built on a pre-existing brain platform or program which is then adapted for other uses.  So language is pretty old and it’s also built-in.  So children arrive in the world and then they pick up language just by being around other people who are talking.  Nobody sits down and teaches them.

Reading, on the other hand, you will not pick up unless somebody spend some time with you, and writing is even – writing by hand is apparently even harder.  So what are the platforms that these things are built on, and it has been proposed that reading is built on very ancient program that had to do with reading animal tracks.  So what you’re doing is you’re looking for visual signs made by somebody else and you are interpreting those back into a story that originally, of course, allowed you to track the animal or to figure out if the animal was tracking you.  Equally important.  You were able to tell what was around in your vicinity by reading those tracks.

So what are those marks we make?  What are those marks on a sheet of paper, piece of stone, clay tablet?  They’re like animal tracks in that we look at them; we translate them back into something which is language.  And that language can be put together in our brains to tell a story, create a poem, whatever the writing may have been.

As for the writing, those are the tracks we make.  So that’s probably based on some sort of display or marking program.  And that too is pretty old.  And if you go back to cave paintings, those – the hand prints on the cave, drawings on the cave, the markings, the pieces of stone or bone that they’ve now found with rhythmic scratches on them.  They’re all forms of signaling, so it took awhile for that to become what we now know as alphabets or language systems, but it probably all had its origins in that form of marking.  And somebody has a theory that all of the alphabets are taken from natural – that they had their origins in natural signs, pictographs depicting natural things.