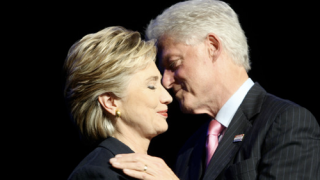 Why the Clintons Are Married

Helen Fisher found six personality chemicals that play off each other in relationships. There’s a reason why Bill cries during Hillary’s speech.

Question: Why are we attracted to some people and not others?

Helen Fisher: Nobody knows.  This is what we do know.  This is what psychologists know.  They do know that we tend to fall in love with somebody from the same socioeconomic background, same ethnic background, same general level on intelligence, same general of good looks, same religious and social values.  We tend to be drawn to somebody who can give us the lifestyle that we are looking for.  Our childhood certainly plays a role, and we are now beginning to find some biological things that draw you to some people rather than others.  New data shows that women with a particular immune system are drawn to men who have an opposite immune system.  So, there’s a lot of factors.  Timing plays a role, proximity plays a role.  There’s many factors in who you love, who you choose.

But I began to – I mean, you can walk into a room and everybody is from your background, same general level of intelligence, same general level of attractiveness and you don’t fall in love with all of them.  So, why is it that we’re almost chemically pulled to one person rather than another?  So, I wanted to see if I could figure out the role of basic body chemistry.  And so I looked through a whole lot of biological data and there’s a lot of chemicals in the brain, but most of those keep the eyes blinking, or help with swallowing, or keep the heart beating, etc.  Not many of them are linking with personality traits.

Four chemicals, actually six chemicals are related to personality traits.  So, I wrote down on separate sheets of paper all of those traits associated with the dopamine system, the serotonin system, the testosterone system, and the last being the estrogen and the oxytocin system.  And then I decided I would create a questionnaire to see to what degree you express these four basic biological systems.  We all express all of them, but we express some more than others.  And then I would watch on this dating site, Chemistry.com, and see not only what you’re chemistry was, but who you were naturally drawn to.  And as it turns out, people who are very expressive of the dopamine system go for people like themselves.  If you are high energy, very curious, have a lot of interests, love novelty, willing to take risks to do new things.  You want somebody like yourself.  And It’s not just jumping off mountains.  I mean, it’s somebody that will go to the opera with you, the theater with you, art exhibits with you, etc.

So, the “explorer,” what I call the explorer, the high dopamine type, tends to go for people like themselves.  So does the high serotonin type.  I call these people the “builder,” Plato called them the “guardian.”  That’s a better term.  These people are cautious, but not fearful.  They’re conventional, traditional, they are calm, social, they’re very managerial, they’re very thorough, orderly, conscientious, and loyal.  They want somebody like themselves.  Serotonin goes with serotonin. But the last two types, people who are expressive of the testosterone system go for people who are expressive of the estrogen system.

But the last two types, those of who are expressive of the testosterone system, both men and women, tend to be attracted to those who are their opposites; those who are expressive of the estrogen system.  I think a very good example is Hillary and Bill Clinton.  She is, I think, very expressive of the testosterone system; direct, decisive, tough-minded, certainly very ambitious, self-contained, and what does she go?  She goes for Bill; very much of the high estrogen.  He’s probably got high testosterone too, but he’s certainly high estrogen.  I mean, he cries when Hillary makes a speech, he feels everybody’s pain.  He sees the big picture.  The whole world knows he can’t stop talking; his linguistic skills are in the estrogen system.  He’s got wonderful people skills.  I’m glad the government sent him into North Korea to get those two girls out rather than his wife.

But I wondered, why is it that two of the explorer types, the high dopamine types, if they’re both great adventurers, who’s going to take care of the baby while they race off to climb Mt. Everest?  It began to occur to me, maybe, and I don’t have the data on this yet, maybe these people are more likely to have a series of marriages.  What I call serial monogamy and have children with each different marriage, in which case they’re creating more genetic variety in their young.  So, there are three different ways of passing your DNA onto tomorrow.