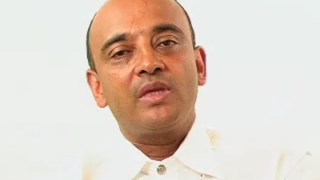 A man of multiple backgrounds.

So I came from, as it were, two families. Everybody comes from two families, but mine came from rather further apart than most.

My mother was born in the west of England on the border of Oxford in Gloucestershire in a part of the world where her father’s family lived for hundreds of years.

And my father was born in West Africa in Ghana, in the capital of the Ashanti Kingdom, which is sort of in the middle of Ghana in a town called Kumasi is the old capital where his family had also been for hundreds of years.

And I guess I was brought up knowing something of the family history on both sides. So my mother’s father was a politician as was my father. My mother’s father; he was what’s called Chancellor of the Exchequer in England. He was finance minister just after the war [World War II]. He was leader of the House of Commons during the war when Churchill was Prime Minister. And he was a pretty well known sort of socialist member of Parliament for much of his life. Also a lawyer, a very successful lawyer. He was Attorney General at one point.

And my father was also a politician. He was a Member of Parliament in Ghana, an independent. He was also a lawyer. He was eventually President of the Ghana Bar Association.

And I would say they were both people not very well designed for politics. My grandfather was a bit stiff necked. He was rather uninclined to the compromise that I think is probably required to make politics work.

And my father, if anything, was even worse at that. He was very bad at compromising and he stuck to his principals a great deal, which meant that he was always in opposition. He was never really in elected government positions. Bhe really enjoyed, I think, being the kind of gadfly more than he probably would have enjoyed being in charge of anything.

My mother wrote children’s stories which were, in the first place, based on stories that my father had told us when we were growing up – traditional folk tales from Ashanti where we were growing up. And then she moved out and started writing other children’s books. She started out writing stories based on the folk traditions of my father’s place. So that’s who they were.

My father’s father was the brother-in-law of the king actually where we lived, and also his secretary. And then when the king died he was succeeded by my uncle who was married to my father’s sister, my Aunt Victoria. So we were pretty well connected in Kumasi I suppose. I remember going to the palace a good deal when I was a child to see my grandmother, who was the wife of the king.

I have to say that – and I think my sisters would agree – it didn’t strike us as a very difficult thing to do. We went back and forth between my mother’s part of the world, my grandmother’s home in England and our home. In both places we had large families that we knew. Many cousins, and uncles, and aunts and so on with whom we spent a lot of time when we were visiting them in England, and with whom we spent time in Ghana because we all lived together in the same town.

At home in Ghana we were visited often by people from many places. I don’t remember it, but apparently Richard Wright, the African American novelist, visited us when I was a child. And C.L.R. James, the west Indian intellectual, visited. And then Pandit, who is the sister of Nehru, the Prime Minister of India.

One of my English cousins lives in Thailand and is married to ______ wife. One of his sisters married a Kenyan and lived until he died in Kenya and so on.

I had a Lebanese uncle in Ghana because one of my father’s cousins married a Lebanese man who lived in our hometown. So we grew up in a family that contained people from many places. My Lebanese cousins, their father was Muslim, so we knew about Islam a little bit. I have Jewish cousins in England, so I knew a little bit about that.

We ourselves were sort of boring, mainstream Protestants. Both my parents were pretty active in their respective churches.

One of the things I do think about my background is that I got a lot of my moral education from Sunday School; from a certain kind of Christian background, which both my parents cared about a good deal. And it led them and it encouraged them to lead us to be pretty convinced of the importance of not tolerating injustice I suppose.

My father was very active doing kind of pro bono, often political cases in Ghana when he was a lawyer. We just grew up in a family which was pretty preoccupied with political life and with social life. My mother was very active in community stuff. We were taken when we were children very often to the children’s home and the old people’s home in our hometown to take food to them, to see people there. So that, I think, was an important influence.

I don’t mean that I spent all my time in old people’s homes and orphanages; but I do think I acquired from them the sense that you shouldn’t stand by when injustice is being done; and that you should be actively involved in whatever community you live in.

My father said to us before he died, “You should think of yourselves as citizens of the world,” and it’s clear that what he meant was, “I don’t care where you live. It would be nice if you lived in Ghana, but if you didn’t want to live in Ghana that’s fine. If you live in England that doesn’t matter either. What matters is that wherever you are, you are a good citizen of that place, and that you have some sense of responsibility for the whole species, for the planet.”

And the fact that he bothered to say it in this rather high-minded way was a reflection, I think, of the fact that he took that pretty seriously. And I try to take it seriously too. And it’s a good thing that he put it that way since only one of my sisters live in Ghana. The other two live in Namibia and Nigeria. And my Namibian sister is actually married to a Norwegian, so she lives a little bit between southern Africa and Western Europe.

What should we be asking ourselves?