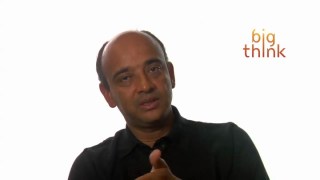 We Should Be Ashamed of Our Prisons

In 100 years Americans will look back with horror at our current penal system. The U.S. incarcerates one-quarter of world’s prisoners despite having only 4% of its population.

Question: In 100 years what cultural phenomena will we look back on and ask, “what were we thinking?"

Kwame Anthony Appiah: That’s a very important question because if you think that we are at the beginning of some moral revolution, or that we should be at the beginning of some moral revolution, then my thought is that we can think already about how to mobilize the systems of honor in order to get it going and to do the job of being the people who organize the societies and the organizations that bring the arguments to bear and get honor shifted.

I just give... let me give just two examples which I think are very important.  One, is the way in... this is an American example, it is a very local American example, it’s the way in which we have allowed our prison system to become quite appalling.  We have a quarter of the world’s prisoners, incarcerated people in this country, and we have 4% of the world’s population.

I think it’s completely uncontroversial that things are appalling.  You are not sentenced to AIDS, you are not sentenced to rape; you are sentenced to incarceration.  And so no decent person can defend what’s going on, but it’s one of those cases where we haven’t organized ourselves yet and we haven’t looked ourselves in the face and said, "You know, we really can’t regard ourselves as decent people if we don’t do something to reform conditions in our prisons," where, by the way, just in case people don’t know this, the vast majority of these people are in there for non-violent drug offenses.  They’re not people who are... pose a very great threat to anyone else directly.  We don’t need them in there to protect ourselves from this.  It’s just gotten out of control and we are not looking.  We are not attending properly.  Just as many people in the 18th century in Britain didn’t think properly about what was really going on in the hulls of those slave ships.

Let me just mention one more because I think this is a revolution that is underway, but it’s interesting.  And that’s the revolutionary attitudes to lesbian and gay people.  I’m in my mid-50s; I came to this country in my late 20s.  When I came to this country, if I had said to the immigration official as I came in, by the way, I’m.. I suppose I would have said, I’m a homosexual.  He would have been legally obliged to deny me entry.  And fortunately he didn’t ask, I don’t know what I would have said.

But now, in the generation of people from the ages of 18 to 25, a very significant majority, not only don’t think that there’s anything wrong with gay sex, they believe that gay people ought to be allowed to be married.  Again, 30 years ago, if I had come to this country and looked around for a bit and you’d said to me, “So, I see where Americans are going to have gay marriage soon,” I’d have told you, you were out of your tree.  I’d have told you you’re completely crazy.

And notice that in that case, part of what’s happened.  There’s two sort of honor things that have happened.  One is, that the process of coming out and the process of self public identification as gay has made something that used to be shameful, not.  In fact, we have gay pride rallies.  That’s one thing.  But more importantly because this has to do with the attitudes of other people to lesbian and gay people, it’s not in the younger generation embarrassing to be caught in a homophobic moment.  Right?  It’s not just that it’s wrong to be homophobic, it’s not cool.  It’s trashy, it’s tacky.  And that means that our system of assigning respect to people has gone from making it perfectly normal to be respectable if you say something rude about queers, to it’s being unrespectable and people making sure that they don’t want to be caught out being found in a homophobic moment.

Now, it’s not over and these percentages for the young are not yet, obviously duplicated in percentages for older people, but of course, the young are the ones who are going to inherit the kingdom.  They’re going to inherit this country and by the time they do, by the time the people who are now 18 to 25 are my age, it’s very likely that the vast majority of the population will share these attitudes.  And it came... it’s a revolution.  It happened relatively fast.  Stonewall happened when I was a teenager.  And so I’ve seen it happen.  I was... I mean, I wasn’t at Stonewall, I was in the United States, but I mean, I was alive when you could still be arrested in New York for holding hands if you were two men or two women.  And now you can’t.  And furthermore, people aren’t embarrassed... I mean, some people are, but most people aren’t embarrassed to see men holding hands or embracing one another, or women doing the same.

So I think there is another case where, that’s not one that happening in the future, I think it’s sort of happened.  The big shift has happened, the big norm shift has occurred.  Young people... because in the next generation of young people simple don’t get it.

Why It’s Weird That We Honor Snooki