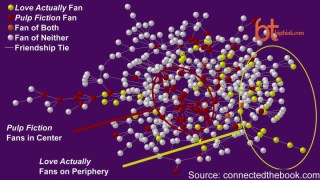 Influencing tastes across social networks is a tricky business: a love of “Love Actually” spreads differently than a love of “Pulp Fiction.”

Question: How can we manipulate social networks to spread rndesirable effects?

Nicholas Christakis: Well there arern two distinct issues here. One is how do networks naturally come to rnevince particular spreading processes and the different one is how mightrn we manipulate these ideas to seed networks affirmatively with desirablern properties and the way we think about this in terms of policy rninterventions is there are two broad classes of things we might do. We rnmight manipulate the pattern of connection between people or we might rnmanipulate the pattern of contagion between people.

So simple rnexamples of connection are ones most people are familiar with. For rnexample Alcoholics Anonymous or Weight Watchers are artificial social rnnetworks. You take a group of people and you form a set of ties between rnthem and having done so you achieve or exploit a kind of power of socialrn networks to magnify whatever they are seeded with, so you get this rnpositive reinforcement between these people and just like the bucket rnbrigade example we discussed earlier, these people now assembled into a rnlittle artificial miniature network that is focused on alcohol you know rncessation or weight loss are now able to do something or at least do rnsomething better than the individuals acting alone. And it’s not just rnthat the weight loss like if you had 10 people and you gave them each anrn intervention and they each lost a pound they would lose a total of 10 rnpounds, but you put these 10 people together in a room and you have themrn interact with each other in order to lose weight and they might lose a rntotal of 20 pounds. So the group, now having been assembled and this rninteraction having been fostered you get more bang for the same efforts,rn same people, but now with the ties between them you can get more rnbenefit.

So one set of interventions would be focused on rnmanipulating the connections between people, creating connections, rncutting connections, particular patterns of connections forming the rnkinds of networks, the prototypical networks that we described earlier. Arn completely different set of interventions might be focused on rnmanipulating patterns of contagion within the network. Here, for rnexample, you might map the network of a set of school kids in a rnclassroom and target specific kids to receive a smoking cessation rnmessage or a seatbelt use message. With the idea that if you were able rnto persuade that one individual you would get, sort of, cascade benefitsrn to other people. So it’s not just that one person that benefits, but rntheir change in behavior influences others and so forth, so that you rnget… you can collect all of that benefit just for the one cost that you rnbore in changing the behavior of one individual. So here the idea might rnbe that there might be particular individuals who are more influential rnwithin the network, but this is actually a very complicated area becausern it’s not enough to have influential individuals. You also need rninfluencable individuals. And it’s not enough to just have shepherds andrn sheep, but you also need them to be connected in very particular ways, rnso I don’t want people to think that "It’s just very simple. You just rnmap the network. You find somehow the most influential person and you rnjust target them and then everything is terrific." First of all, rnbehavior change is difficult regardless, but second it’s not always rnobvious how best to intervene and manipulate networks.

So I’ll rngive you one simple example. We mapped a network of college students andrn we looked at their tastes in things. We used actually Facebook in this rnparticular case to get our data. Most of our data is real life, rnface-to-face networks or experimental networks that we create. This was rnan online network example. And we looked at what these students listed rnas their favorite taste in movies and we found that of the top 10 moviesrn that they listed not all of the movie tastes spread. So for instance, rnif I listed "Lord of the Rings"as my favorite movie, it didn’t rnaffect my friends to also be interested in "Lord of the Rings." Maybe they were rninterested in "Lord of the Rings" rnanyway from advertising or they heard about it or God knows what, but itrn wasn’t because I chose "Lord of the rnRings"rn that it affected them. But certain movies if I listed a taste inrn this movie it did affect my friend’s interest in the movie. For rninstance, we found that if people picked "Love Actually" as theirrn favorite movie it affected whether their friends liked "Love Actually" or if they picked "Pulp rnFiction" as their favorite movie that it would influence their friends rnto like "Pulp Fiction" as well. rnOkay, fair enough. Well then when we mapped the network what we found rnwas that the seemingly most influential individuals or at least rnindividuals you might superficially think of as influential, those in rnthe center of the network they were all "Pulprn Fiction" fans and the "Love Actually" fans were located on the rnedge of the network. So if you’re someone that is trying to sell "Love Actually" and you think I’ll just rnmap the network and find the central individuals it probably wouldn’t rnwork because those are the "Pulp Fiction"rn fans. Trying to get them to watch "Love rnActually" isn’t going to be so effective. So in this example the rnpoint is that a simpleminded kind of sense that "Oh, the central rnindividuals—all I need to know is the structure of the network, I know rnwho is central, I’ll just give them my message," isn’t likely to be rneffective because you need to know more about the system, more about thern pattern of ties, the individuals within them and the processes by whichrn things flow before you can really have an intervention.
Recorded March 31, 2010
rnInterviewed by Austin Allen
Up Next