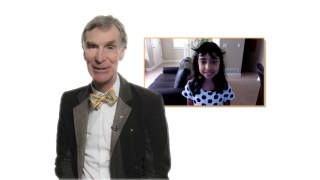 Hey Bill Nye! How Did You Come Up With the Idea for the LightSail?

In today's edition of #TuesdaysWithBill, 8-year-old Shya asks Bill Nye about the LightSail satellite, a solar sailing spacecraft launched by the Planetary Society and currently "sailing" around us in space.
▸
3 min
—
with
Bill Nye, The Science Guy

In today’s edition of #TuesdaysWithBill, eight-year-old Shya asks Bill Nye about the LightSail satellite, a solar sailing spacecraft launched into space by the Planetary Society. Although he is most commonly linked to LightSail, Bill notes that it wasn’t really his idea. In fact, this is an experiment over 35 years in the making, ever since it was first proposed by Bruce Murray and Lou Friedman of Jet Propulsion Laboratory in collaboration with Bill’s astronomy professor, a guy you might have heard of named Carl Sagan.

Be sure to track LightSail’s progress via the Planetary Society website. Have a question for Bill? Learn how you can submit to #TuesdaysWithBill here.

Shya: Hi Bill. My name is Shya. I am eight years old. My question is how did you come up with the idea for the LightSail.

Bill Nye: I love you. That’s a great question. So it wasn’t really my idea, Shya. People who lived before me, people who were astronomers and physicists discovered that light, even though it has no mass, has a tiny, tiny bit of momentum. Just while you’re sitting there in a room with the lights on and when you’re out in the sun, there’s just a tiny, tiny push on you because it’s pure energy. So when it strikes something it imparts some energy to it. It gives it a little push. People over just about a century ago realized if you had a spacecraft in space of low enough mass — it wouldn’t weigh very much on earth — and it was big enough it would get a push. And so my old professor, Carl Sagan, was a big advocate of this making a solar sail as it’s called to catch up with Comet Halley, which you may sometimes hear as called Halley’s Comet. And that mission got canceled. That spaceship got canceled for other NASA projects. But now at the planetary site, which he started, Carl Sagan started, with the head of the Jet Propulsion Lab Bruce Murray and Lou Friedman who was an engineer at Jet Propulsion Lab out in California. They worked on that comet Halley mission and they held it in their hearts. They wanted this thing to fly. And now I have become the CEO of the Planetary Society started by those three guys. And now 39 years after Carl Sagan presented this idea to the world, we are flying a much more modest, nevertheless when you look at it, it looks very much the same, LightSail spacecraft. It would have the capability — here’s our patch, our mission patch. It would have the capability to take you to the moon, to Mars, to asteroids at a very low cost, which is a big problem, you know, in anything is how much it costs. That is a great question Shya. I hope you follow the mission. We’re in space right now as I talk and in the next few weeks, after we spread out from other spacecraft, we will deploy our sails, extend our shiny sails and see if it works. By the way if the sails were black, the light would hit it and give it a push. But because they’re shiny the light hits it and bounces off and that’s mathematically exactly twice the push. So Shya, that’s math. And I want you to get good at it. Thanks for the question.

Navy SEALs Are Warmer and Fuzzier Than You Might Think