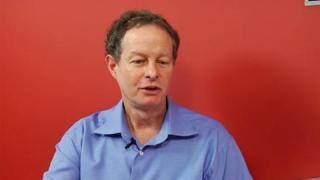 Justin Fox:  Our pages in HBR are full of these discussions about how sustainability is going to...  is becoming a competitive advantage.  Do you believe that or do you think there will be lots of companies out there that will just have their own way of competing, it will be different from you guys and not that way?

The truth is most customers don’t care about it.  Most customers at the end of the day still care mostly about price, and that is the dominant consciousness that is still out there. But there is a growing consciousness for things like environmental sustainability or animal welfare, which is another initiative that we’ve launched, our animal welfare rating system, so we are rating how the animals were raised and how they’ve been treated through their birth to their death and have transparency on that as well, through a third-party certification process. That is a niche, but it’s a niche that can grow.  When we first started out 30 years ago "organic" was a niche and most people didn’t know what it was and they could care less if they heard about it and but I would say partly due to Whole Foods’ success "organic" is something now that is very much in the national consciousness.

John Mackey:  Yeah, more recently the emphasis on local agriculture is something Whole Foods has gotten way behind and has helped to popularize is beginning to... something that we’re also beginning to see Wal-Mart pay attention to, so in a lot of ways Whole Foods Markets is helping to evolve the agricultural system in the United States in ways which we think are probably positive for the environment and positive for people’s health.

Justin Fox:  With local you had this really interesting back and forth with Michael Pollan like four or five or six years ago where I think he criticized you and Whole Foods.  I mean what was your evolution through that process?

John Mackey:  Well Michael wrote his book, "The Omnivore’s Dilemma" and he took a lot of... he took some I think unfair pokes at Whole Foods.  He didn’t actually do any first... he didn’t really do any research on it.  He did his four meals in that book and in three of the meals he did a lot of research on and the fourth meal with Whole Foods he didn’t talk to anybody at Whole Foods.  He didn’t dive deeper.  He just did his own personal investigation from just being in the stores and therefore I think he got a lot of things wrong.

When I read his book of course I wasn’t very happy about how Whole Foods was portrayed in that book and I began a dialogue with him and that ended up I posted on my blog an open letter to him and he responded and then we ended up in a debate in Berkley, California back in February 2007 I guess it was. That was a healthy exchange and, to give Michael credit whereas I disagree with a lot of things he said about Whole Foods there were certain parts of his criticisms that I think ended up being true and Whole Foods wasn’t doing enough to promote local agriculture.  We were not doing enough to promote, for example, grass-fed beef and we had put way too much emphasis on "organic" and not enough on some of these other aspects. And it was good for Michael to call us to task for that.

While those types of criticisms sting, they don’t feel very good, there was also an opportunity there.  I actually think you should engage your critics and see them as a type of stakeholder, a stakeholder who is helping you to get better, helping you to improve.  It’s not bad to think of your other critics that way too, journalists potentially, in Whole Foods’ case labor unions.  Sometimes the critics actually they get it wrong, but sometimes they get certain aspects right and you have to have enough openness and swallow your ego to learn what you can. I do think Michael Pollen helped Whole Foods to become a better company and while I think a lot of his criticisms were off base enough of what he said was true that it caused us to self-examine ourselves and make some improvements which I think made us a better company and have provided better products for our customers.