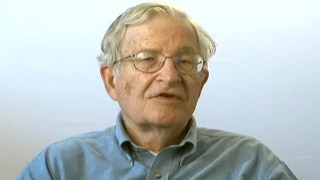 Noam Chomsky explains why “that feeling of helplessness” and “impotence” is the natural response to American democracy.

Question: What is the most dysfunctional thing about American democracy?

Noam Chomsky:  American democracy is what we call a "guided democracy" in countries that we don't like, like Iran.  So in Iran, elections are, putting aside questions of the credibility of elections, elections are—the candidates are vetted by the clerical leadership.  Guardian council decides who can run.

We're pretty much the same.  Here candidates are vetted by corporate interests. The way it's done is, that unless you have huge corporate financing and support, you just can't run.  [Barack] Obama won over [John] McCain, primarily because the financial institutions liked him better, so poured money into his campaign much more than McCain.  And if you check funding and polls, you find that the advertising and so on, in fact carried him over the edge.

And that's true all the way along.  Elections are basically bought.

Congress, for example, has very low ranking among the population; it's in the teens sometimes.  Nevertheless, the overwhelming majority of incumbents win.  What does that tell you?  It tells you people are voting for candidates that they don't like, because they don't have any choice.  These are fundamental defects in the democratic system.  It's a huge “democratic deficit,” as it's called and it shows up.  There's a very sharp division between public policy and public attitudes on a host of major issues.

That feeling of helplessness, impotence, everything is run by somebody else, I can't do anything about it—that reflects a democratic deficit.  These are enormous problems with the way the democratic system functions.  There's something similar in most places, but the United States is pretty extreme in this regard, among the industrial democracies.