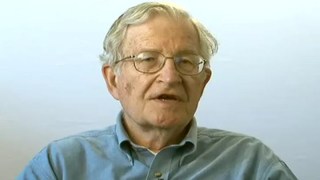 Obama hasn’t disappointed Chomsky yet–but the linguist didn’t expect much from him anyway.

Question: What is the most commendable thing Obama has done in office?

He's retracted some of the more extreme [George W.] Bush positions.  So, for example, say on Cuba, Bush imposed conditions—the normal conditions are totally outlandish and ridiculous, which is why everyone, except Israel, votes against them at the UN.  And why the majority of Americans object to them.

But Bush went way beyond.  He imposed even harsher conditions and Obama withdrew some of those.  On nuclear issues, he has indicated that the US should return to the mainstream of international affairs, assign the—consider again the comprehensive test ban treaty move towards reducing nuclear weapons.  Okay, that's a step forward from Bush's position, but it's a step towards the center and towards the international mainstream and also towards American public opinion.

And there's a number of other cases like that where the [George W.] Bush administration, especially its first term, was quite extreme, which is why the US’s standing in the world fell to historic lows.

And in the second [term], Bush sort of moderated that to some extent.  And Obama's continues to move back to what I always thought he was frankly—and wrote about it before the election—a familiar center democrat.

Question: What has Obama done that has disappointed you?

Noam Chomsky:  Nothing much because I never expected anything.  I was a little surprised by the fact that he re-instituted some of the judicial practices that were kind of unconscionable, that [George W.] Bush made use of.  Like, he wants preventive detention permanently.  He's been waffling about torture.  He's refusing to grant normal criminal trials to people that they have no evidence against, they claim to have none.  Things like that have been a little surprising.  I don't think he had to be that extreme in his interpretation of—actually deviation from any reasonable legal system.