Skip to content
Who's in the Video
Robert M Sapolsky
Robert M. Sapolsky holds degrees from Harvard and Rockefeller Universities and is currently a Professor of Biology and Neurology at Stanford University and a Research Associate with the Institute of[…]
Go to Profile
Videos
Your Evolved Brain Is at the Mercy of Your Reptilian Impulses—and Vice Versa
You have three types of brain inside your brain. And they're all fighting for dominance.
▸
8 min
—
with
Robert M Sapolsky

You have three brains—the triune, the limbic, and the cortex—and they’re all fighting for dominance as you go about your life. The so-called lizard brain (the triune) is perhaps the one we tend to think of as instinctual and gives us our basic instincts like, for example, staying alive or not touching fire. The limbic brain controls our emotions like fear and desire, while our cortex gives us the knowledge that makes us human. Basically, the three brains talk to one another and vie for rank in certain situations… it’s sort of like Three’s Company except with brain systems. For instance: you’re reminded of something sad by your cortex and it triggers your limbic system, or you get cut off in traffic your lizard brain can trigger the cortex and the limbic. It is a pretty fascinating subject, and Robert Saplosky waxes poetic about the three distinct “characters” that live up inside your head.

Robert Sapolsky’s most recent book is Behave: The Biology of Humans at Our Best and Worst. 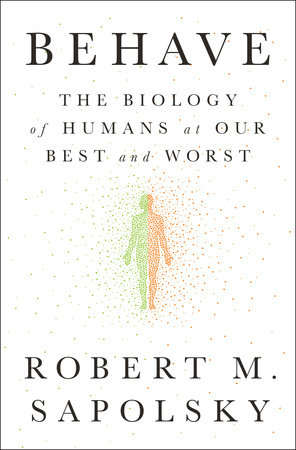 ROBERT SAPOLSKY: What’s the best way to think about the brain? It’s insanely complicated. Everything connects to everything. A gazillion little subregions.

Amid all that complexity there’s a broadly sort of simplifying way to sort of think about aspects of brain function when it comes to behavior. And this was an idea put forth by this guy Paul MacLean, a grand poohbah on the field, conceptually of thinking of the brain as coming in three functional layers.
The triune brain—and again this is highly schematic—the brain really doesn’t come in three layers, but one could think of the first most, the bottom most, the most ancient as being what’s often termed the “reptilian brain,” where basically the parts in there, we’ve got the same wiring as in a lizard, as in any ancient creature. It’s been there forever—ancient, ancient wiring at the base of the brain, most inside. And what does that region do? All the regulatory stuff. Your body temperature changes, it senses it and causes you to sweat or shiver. It’s monitoring your blood glucose levels. It’s like releasing hormones that are essential to sort of everyday shop keeping. It’s just keeping regulatory stuff in balance.

Sitting on top of that is conceptually what could be termed the limbic system, the emotional part of the brain. And this is very much a mammalian specialty. Lizards are not well known for their emotional lives. Part of the brain having to do with fear, arousal, anxieties, sexual longings, all those sorts of things – very mammalian. You’re off there in the grasslands butting heads with somebody else with antlers, and its your limbic system that’s heavily involved in that.

Then sitting on the top is the layer three, the cortex. The cortex, spanking new, most recently evolved part of the brain. Everybody’s got a little bit of cortex but it’s not until you get to primates that you’ve got tons, and then apes, and then us. So functionally it’s very easy to think of this simplistic flow of commands. Layer two, the limbic system, can make layer one, the reptilian brain, activate. When is that? Your heart beats faster not because of a regulatory reptilian thing—Ooh, you’ve been caught in something painful but oh, an emotional state. You’re a wildebeest and they’re some scary menacing wildebeest threatening you and that emotional state causes your limbic system to activate the reptilian brain and your heart beats faster. You have a stress response. Not because a regulatory change happened in your body but for an emotional reason.

Then it’s very easy to think of, layered on top, this cortical area commanding your second layer, your limbic system to have an emotional response rather than something emotional: Here’s a threatening beast right in front of you. Something emotional. You see a movie that’s emotionally upsetting. See a movie. These are not real characters. They’re pixels and it’s your cortex that’s turning that abstract cognitive state into an emotional response.

Likewise your cortex, layer three, could influence events down in layer one. You see something upsetting, you think about - you think about mortality, “One of these days my heart is going to stop beating,” and your heart’s going to beat faster. You’re not bleeding and hypotensive. You’re not in some—nothing in the reptilian brain could make sense of this. A purely cognitive state: “Ooh, on the other side of the planet there are people undergoing some traumatic event and I feel upset about it,” and your reptilian brain responds.

So it’s very easy given that to think of a “three talks to two talks to one” sort of scenario.

Just as readily though, one talks to two talks to three. What would be a case of that?

What’s your reptilian brain talking to your cortex? Remarkable finding: When we’re hungry we make harsher moral judgments about people’s transgressions. We’re less charitable. We cheat more in economic games. Our cortex assessing the effects of prosociality, antisociality and altruism and its evolution.

And part of what it’s doing in deciding how it feels about somebody else’s plight is if your stomach is gurgling, if you’re hungry, if you’re in pain that affects very cortical judgment-type areas.

Layer one, this ancient reptilian brain that should have nothing to do with how your cortex works, having tons to do with it. Or layer two influencing layer three, your limbic system, your emotional state influencing your abstract cognitive processes. What’s the most obvious example of it? When we’re under stress. When we’re in an emotionally aroused state. We make stupid impulsive decisions that seem brilliant at the time. Affective emotional limbic layer two influencing how your cortical cortex goes about its abstractions. It’s not that abstract. It’s embedded in the biology of all these layers.

So this interaction between these layers it seems this very mechanical process, potentially even an unconscious one. How do we consciously have, say, our cortex regulate an emotion, a limbic two layer? Simple. Think about the most arousing, wonderful thing that ever happened to you umpteen decades ago, and your cortex is evoking a memory that’s got your limbic system humming along in some excited state. Or think about—think cortically, or pull out the memories of—some traumatic event and your limbic system is responding.

How about reptilian level? Easy to make it get into an agitated state. Sit there and think about, think  something incredibly upsetting. Think about some memory that was truly disturbing. Think about mortality. Think about global warming. And your heart speeds up. Layer three in a very conscious way has mobilized layer one. A lot harder is the inverse: You’re sitting there and you suffer from high blood pressure and either they could marinate you in antihypertensive drugs for the rest of your life or an alternative approach, a biofeedback approach is sit there and think about the happiest day of your life. Think about being in an open field that’s beautiful. Think about your favorite vacation. Think about, think about. And if it’s the right “thinking about,” suddenly your heart slows down. Suddenly your blood pressure goes down. Ah, the core of biofeedback is figuring out what sort of conscious states you can evoke that will affect your reptilian brain in a direction that’s good for your health. And all you do then is learn how to get better and better in some stressed hypertensive circumstance. What conscious act of thinking can I mobilize here at this point that will cause changes in how my big toe’s blood flow is working? And a case like that, that is very conscious regulation of more autonomic, more ancient parts of your brain.

Up Next
Why we start emotionally charged fights, and how to rise above them
▸
6 min
—
with
Dan Shapiro
Related
Starts With A Bang
Ask Ethan: What are white holes, and do they really exist?
In General Relativity, white holes are just as mathematically plausible as black holes. Black holes are real; what about white holes?
Life
Strange life forms create an “alien” ecosystem in an abandoned uranium mine
Slimy biofilms made up of bacterial and eukaryotic life forms have taken over an abandoned, flooded uranium mine in Germany.
Hard Science
Earth has an eerie “sodium glow,” and astronomers use it to image stars
Air currents in our atmosphere limit the resolving power of giant telescopes, but computers and artificial stars can sharpen the blur.
Health
How saliva changes the flavor of food
“It's a liquid, but it’s not just a liquid."
High Culture
Why are flood myths so common in stories from ancient cultures around the world?
Could the prevalence of flood myths around the world tell us something about early human migration or even the way our brains work?