The “triune brain” model dates back to the 1960s, when it was first introduced by neuroscientist Paul MacLean. The idea is that the human brain is sort of three brains in one. They are arranged back to front, or bottom to top, like sedimentary rocks.

According to MacLean, the most primitive — some say “reptilian” — basal ganglia sit at the back or bottom of the stack. Next up or frontward sits the limbic system. At the top of the stack is the most recently developed neocortex. (There is some debate about MacLean’s model.) 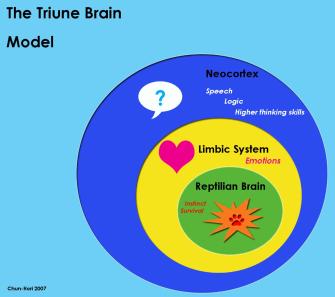 The basal ganglia are in charge of the most basic functions: making sure we eat enough to survive, avoid being killed to survive, and mate enough for the species to survive.

The limbic system allots more finesse to these most basic imperatives by giving us emotions: the ability to feel this way or that about things. It makes us more discriminating, for example, caring about certain others enough not to kill and eat them. Also, emotions like fear super-charge the basal ganglia’s fight-or-flight impulses, which is potentially an evolutionary plus. The neocortex provides all the thinkiness that makes us humans so clever, for better and for worse. 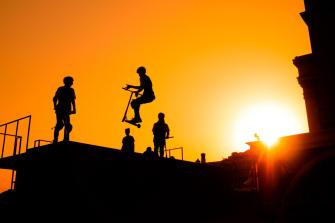 It used to be that the often emotional, unfortunately self-destructive, frequently baffling behavior of teens was credited to runaway teenage hormones. It is now understood to be the “rewiring” of the “brains” that starts at adolescence and continues until early adulthood.

The whole brain reaches its full size just prior to adolescence but lacks adult interconnectivity. So, starting at the bottom and working its way upward, the brain prunes away previously unused connections in the gray matter and starts building new connections between the three brains.

A lot of the remodeling going on during the teen years, therefore, is in the limbic system, which explains the drama that so frequently occurs in a teen’s life. This roughly 10-year process also explains stupid, dangerous teen behavior — the intelligent, thoughtful, smart cerebral cortex is the last “brain” to fully kick in.

The connection between these three “brains” is what makes us tick. When things are going well, it allows us to function as thinking, feeling, surviving human beings.

Tags
braincritical thinkingemotionsneuroscience
In this article
braincritical thinkingemotionsneuroscience
Related
Neuropsych
Asthma drug brings back “lost” memories
In a study involving mice, scientists used two different techniques — one optogenetic and one pharmacologic — to recover “lost” memories.
Life
Our antidepressant drugs are affecting animals and ecosystems
A toxicologist explains the impacts of antidepressants on fish — and no, they’re not getting any happier.
Thinking
Visual thinking: How to understand the inner lives of animals
Humans are good visual thinkers, too, but we tend to privilege verbal thinking.
The neuroscience of loving music
Humans are musical animals four million years in the making, explained by music expert Michael Spitzer.
▸
8 min
—
with
Michael Spitzer
Neuropsych
How you breathe affects your brain
Your breathing rhythm influences a wide range of behaviors, cognition, and emotion.
Up Next
Strange Maps
Did dark magic conjure up the British Empire?
Esoteric evidence points to a ritual performed by Queen Elizabeth’s court magician John Dee.