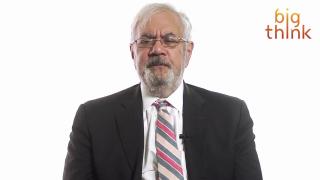 Regulation for the Future, with Barney Frank

Former U.S. Representative Barney Frank discusses why we need regulations in place for future technology. This video is a highlight of Frank’s presentation at Exponential Finance 2014, presented by Singularity University and CNBC.

Barney Frank: The question is what should we be cognizant of as new technologies emerge, and frankly it's a very good question and it answers itself.  We should be cognizant of the new technologies.  The pattern that we see where regulations could go or that we should see is the private sector innovates.  And that's a good thing because they create the wealth the private sector and those innovations generally succeed if they have value added to the public, which decides whether or not to buy them; to participate in them.  At some point innovation will reach a kind of critical mass and it will so change the situation that you need new rules. And the problems come in from this standpoint when the regulations lag the state-of-the-art and when innovations have created new phenomenon that are not well regulated.  In 1850 there weren't very large enterprises in America so there were no national economic policies, no antitrust, no general national economic regulation.  By 1890 we had big oil, big steel, big coal, et cetera, so they had to, in the turn of the 20th century, come up with national rules.

Forty years later you now had large enterprises that were financed through stocks but there were no rules for the stock market and for mutual funds, et cetera.  So under the new deal they created the security exchange regulations, mutual fund regulations.  That worked well for about 50 years, but by the '80s you had a lot of money coming into the system outside of the banks because you had oil countries with a lot of money, you had Asian countries with large balances of payment.  And our financial system was set up to regulate loans now, the problem here was loans; it was stocks earlier.  Loans were generally made by banks up until the '80s, but after the '80s a lot of loans were made by non-banks and they weren't regulated.  There were also you got information-technology.  It was now possible, beginning in the '80s, for an entity to make a lot of loans and then instead of waiting for each individual to repay the loan, package them into a security, the process is called securitization, and sell it and sell pieces of it.

So, you bought now, as an investor, pieces of a thousand loans.  You couldn't keep track.  You didn't know if they were any good.  There were no rules for that situation.  People who lend money and expect the borrower to repay are careful about the quality of the borrower.  People who lend money and then sell the loans to others don't worry as much.  So what happen in the '80s, '90s and into the turn of the 21st-century was a lot of innovations that had no rules.  What we did in the Financial Reform Bill was to create new rules and I believe we now have a fairly good set of rules for the current situation.

The next issue is okay, what do we look out for?  And the answer is we don't know what to look out for because we don't know what the innovations will be of the future.  But what we did do was to give the regulators, in this case, the power to adopt new rules as new phenomenon come up.  In other words we did two things, we had a kind of backwards looking set of rules; okay we're going to regulate securitization, derivatives, et cetera, but we're also going to give the regulatory bodies information and the authority to adopt new rules as new things come up.  So short answer, what should we be looking for?  We should be looking for the new phenomenon that will ultimately transform the situation and not wait to adopt rules that regulate them.

BBQ of the Gods, with Michael Pollan