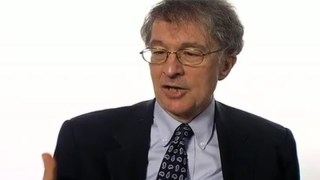 The psychologist argues that different periods in history have shown biases towards different types of intelligence, and that this bias will continue to shift with time.

Question: Is our culture biased towards one type of intelligence over another?

Howard Gardner: Well the theory claims we all had these eight intelligences and people are different from one another in their profile of intelligences and there’s no necessary link between one intelligence and the other. It also is based on the assumption that we wouldn’t have these intelligences if they haven’t been valuable in human evolution. An example I like to use is that the—we developed the natural intelligence so we knew what to eat and what not to eat, to be able to pay attention to which animals to run away from and which animals to hunt and of course which plants to eat and which ones—there’s a reason why we're sensitive to the world of nature.

Now most of us, particularly people who watch this, they go to super markets and they don't have to know anything about the wild, but I think that the neural networks which evolved to help us get around in the Savannah’s of East Africa 50,000 years ago, they're now being used for consumer society and we decide which shoes to buy and which car to buy and we're looking at the same kinds of things that our ancestors did but we’re doing it in terms of walking through the mall rather than walking through the—running though the Savannah and hoping we won’t get eaten by some kind of a creature.

As history unfolds, as cultures evolve, of course the intelligences which they value change. I would say, until a hundred years ago, if you wanted to have higher education, linguistic intelligence was important. I teach at Harvard and a 125 years ago, 150 years ago, the entrance exams were Latin, Greek and Hebrew. If, for example, you were dyslexic, that would be very difficult because it would be hard for you to learn those languages, which are basically written languages. People don’t speak Greek when they were in ancient Greek.

Over the last century, clearly the logical mathematical intelligence is something we pay a lot of attention to and the linguistic intelligence is a little bit more of an option. But once one looks at the world of occupations, we have hundreds of occupations and I think the reason that Dan Goleman’s work on social and emotion intelligence has got so much attention is because while your IQ, which is sort of language logic, will get you behind the desk, if you don’t know how to deal with people, if you don't know how to read yourself, you know you’re going to ending up just staying at that desk forever or eventually being asked to make room for somebody who does have social or emotional intelligence.

When the singularity occurs and the machines are smarter than we are, then it’s the artistic kinds of intelligence or intelligence used artistically to be more precise, which will come to the fore.

Question: Is the theory of Multiple Intelligences reformist?

Howard Gardner: I think you can talk about reformism in two sentences, one is it’s clear that when I developed this theory in the late 1970s I was trying to reform the way psychologists and other people think about intelligence. So certainly I had an iconoclastic or reformist inclination there. I was kind of surprised the psychologists didn’t all line up in a row and say, "You’re right. We’ve been wrong for 100 years." That’s somewhat facetious but I was surprised in how much interest there was within the educational world, and there I would say gradually, I switched from simply saying this is how I think the mind is organized and how it has developed to I think there are maybe there are things differently in education because of the theory.

Then really in the last 15 years, I think I’ve become much more reformist because I have been concerned about the ethical dimensions of our society. That doesn’t grow in any natural way out of multiple intelligences theory. If I look at it somewhat autobiographically, as a young person I was very much involved with music. I was a serious pianist and while I never thought about a career in music, music was and has been very important to me. Then when I got to college I became interested in the art forms and then I spent a year in England as a Fellow and I really immersed myself in drama. It’s great to do in theater in London and art galleries and sort of expanded my artistic horizons and then when I went to graduate school in psychology I was stunned at how the arts were never mentioned.

To be a developed person cognitively meant to be a scientist and to think scientifically. We could speculate about why that’s so, but the serious book I wrote was called the Arts and Human Development. And what I said in that book, this was in the early '70s, is all the developmental psychology has thought of science as the apotheosis of human development, yet science is a modern Western invention and we might well never have invented science, if we had not Galileo and Copernicus and Newton. On the other hand, arts exist in just about every society and they’re very important, so can we conceptualize development in terms of the arts as well as the sciences.

Question: Is intelligence determined more by nurture or nature?

Howard Gardner: Well, as you probably know, as the viewers probably know, nowadays nobody takes extreme positions on that issue. Maybe someday the press will learn not to take extreme positions on the issue. And I certainly believe that every intelligence has genetic components; how else would it exist? And every intelligence has certain heritability; that’s the technical term for how much of the variation of population has to do with who your biological grandparents were, because that’s a better set of genes than your parents because you have four sets rather than two.

We don’t know what the heritability is of most intelligences, but from a lot of research we know that on the average human traits are about 0.5 heritable. That means that genes make a big contribution but so do parents, culture, the media, peers and so on.

I guess I never put it this way before, but maybe what I would say is the intelligences that you favor are probably ones where you have a genetic predisposition, but how use those intelligences is going to be overwhelmingly determined by the culture in which you were born and your parents and what they value and whether you get along with your parents and that kind of thing. So the deployment of intelligences is probably largely a nurture factor. But if say if the Bach family had a lot of genes going for it in the music area and probably that was pretty likely that they were going end up being musicians even if they hadn’t—even if they been so to speak separated at birth and they’d been raised in another kind of family.

Question: If there are so many ways to be smart, what does it mean to be "stupid"?

Howard Gardner: The first thing I would say is that life isn’t fair and some people are going to be strong in a lot of intelligences and some people aren’t. I think of the intelligences as a set of computers. If you wanted to summarize my theory in a sentence, we used to think there was just one general computer in here and if you were good at one thing, you’d be good at everything. If you’re lousy in one thing, you’re smarter across the board. Stupid across the board. I think the step I took, I would call it an advance is you can be very smart with language, average with music, lousy with understanding other people, or vice versa. There’s no necessarily correlation between the two.

I think stupid has two very different connotations. One is that your computer isn’t very good. For example, I’m not biologically very good spatially, but the truth is with a map and a position determiner and some special attention to the environment I can do perfectly well, but I suppose if there were a test of spatial intelligence I wouldn’t do very well.

So, one meaning for stupid is it takes you a long to do what it takes other people who are smarter in that intelligence. I’m very musical, especially when I was younger, I heard something once, not only could I remember it, I couldn’t forget it. So that’s smart in kind of a technical sense.

But the other sense of stupid, but I think is much more important, is how do you go about leading your life? Do you know what you’re trying to do? Can you achieve it? When you make mistake, do you make same mistake again? Or do you simply stick in a rut? That has to do with your own understanding of yourself, what you’re trying to achieve; what I call intra-personal intelligence. I much rather to have somebody who was stupid in the first sense but had a good sense of how to negotiate their way through life, than somebody who had the computers going full blast but kept knocking their head against the wall.

I make fun of Mensa—I don’t know a great deal about Mensa, that’s the high IQ group—but I say, "To get into Mensa, you have to have a high IQ, and once you get in, you spend your time congratulating people who are in Mensa with you." To me that’s a pretty stupid way to spend your life.