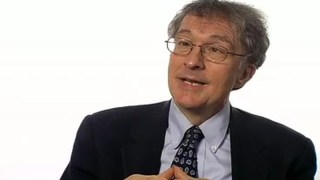 Dr. Gardner warns that a failure to encourage a sense of altruism amongst Americans could signal the end of the US as a moral leader for the world.

Question: How do we change Americans’ conception of success?

Howard Gardner: I’m not going to give a course in American History, but we’ve had periods of greed and we've had periods which were much more generous. I think we are certainly have been in a period of incredible greed. I think certainly dating back 20 or 30 years, that’s not going to be changed overnight. What my perception is that what societies do is a co-occurrence of a set of ideas that have developed, usually by thinkers, by think-tanks, and with charismatic leaders who can bring about those changes. So to use things which most people couldn't have access to -- Franklin Roosevelt build very much on the ideas of the progressive era, which were develop in the teens, and then people like Barry Goldwater, Ronald Reagan, Newt Gingrich, built very much on the neo-conservative ideas which would develop by William F. Buckley and his national review and other such thinkers in the 1950s and '60s.

What I’m hoping is that some genuinely progressive ideas, some general liberal ideas, ideas for example of social entrepreneurship which have grown enormously in the last 10 or 20 years, will intersect with a President who not only totally gets it but has a generous dollop of charisma.

I think what we’re realizing now is this is a significant part of the population tends to more republican than anything else who would rather destroy the Presidency and the President than to come to some kind of a belief that the country can and should be different. But it’s a huge educational effort, education, not just in the sense I do it, but in terms not only of Government but of private leaders of philanthropists, opinion leaders, and folks like me who are trenches and they’re not going to be up there in the stage but who believe in this and try to work on it.

Thomas Friedman who writes a lot about this, clearly is searching for a mission for the United States, because the United States has been essentially the world leader in the last century in terms of policies and of role models. I think he realizes that now a lot of things we stand for is exactly what the world doesn’t want and doesn’t need.

I think if Obama doesn’t succeed, hopefully he will serve two terms and be alive; hopefully he’ll try. If he doesn’t succeed, I think it’s going to be -- I think the United States will be finished as a moral force in the world. And maybe that’s okay. After all, I’m not running for office, so I don’t think United States is exceptional and I don’t think it has to be the moral leaders

Question: What is the US getting wrong?

Howard Gardner: I think that not only have countries like Denmark and Sweden that I know the best—worked out the best kind of balance of individual initiative, creativity, entrepreneurship with some kind of a concern, not only about the country, but the rest of the world. But the people there are much happier and I would love for someone to do a detailed study of the United States and particularly the people who are, I’m going to call the “Destroyers,” to see what kind of understandings they really have of the other possibilities. I’d love to know how Americans have given the choice of one in million becoming a trillionaire, but actually much more likely at the age of 55 losing their job, not being able to get another one, and no matter what their insurance is, the first time something bad happens they get bankrupt or making a little bit less money, making somewhat higher taxes, but knowing that their kids will have a decent education, that there's a safety net.

I’d like to know how many people would really rather choose the first, because I don’t know. I will say something which was a shock to me and shows that I’m very much out in the mainstream. Some years ago I wrote an article for Foreign Policy. They said, “How can we change things for the better?” I know they wanted me to write about education, but it’s a free country, happily. So I wrote about what I wanted, and I said the average household makes about $40,000 a year, I think that nobody in America should be allowed to keep more than $4 million dollars a year, 100 times as much. They can make as much as they want, but anything above $4 million they either have to give back to the government or they have to set up a charity.

Then I said, well, people make money for no more than 50 years, so let's multiply $4 million a year by 50, and we get the $200 million. And I said no American should be allowed to pass on to their progeny more than $200 million. Again, they can make $200 trillion, but everything beyond that $200 million—a sizable sum, I think we would agree—ought either to go back to the government or to some kind of a 501(c)(3) philanthropy. I could not believe the guff I got from people who are wealthy, people who are average, and truck drivers and cab drivers. They all hated it because somehow, I made it, it's mine, and no one can take it away from me. That's insane. It's insane in any analysis, and yet I think that's what we have breathed in in our air, probably to some extent over hundreds of years, but certainly in that toxic Reagan/Gingrich—what did Reagan say? “Government is not the solution; it's the problem.” That's the stuff we've been sniffing. It isn't marijuana; it's that markets can do no wrong.

Question: If you had 90 seconds with President Obama, what would you say?

Howard Gardner: I’ve never met Obama, I don't know whether I ever will, but if I had 90 seconds with him in an elevator this is what I would say: Mr. President, American society has been dominated by the three M’s: moneys, markets and me. Especially the young, the best, and the brightest, the students that I work with they want to be rich, they believe totally in the market, even though that’s a very complicated thing and it’s all about me. We have to switch them, first of all, 90 degrees to the three E’s, which I hope will be visible on the camera. Excellence, engagement, and ethics; that’s what I call good work. Good work is the people who know what they’re doing, are engaged in it, and try to do it in a responsible way.

Then we flip the E another 90 degrees to W, for we. You can’t ask other people to be good workers unless you do it yourself and joining together to do good work is the replacement for money, markets, and me, and the way that we spread excellence, engagements and ethics.

A Changing Culture of Creativity