Shirley Ann Jackson is the President of Rensselaer Polytechnic Institute. A theoretical physicist, she has been described by Time magazine as "perhaps the ultimate role model for women in science."[…]
Go to Profile 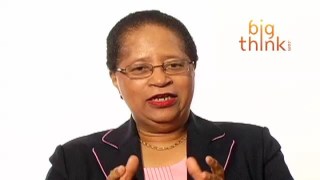 Our “Quiet Crisis” in Science and Technology

America’s most innovative companies are having an increasingly hard time finding qualified staffers who were born in the U.S.

Question: You have said that there is a "quiet crisis" as rnAmerica is falling behind in science and technology. Why?
rn
Shirley Ann Jackson: Over the last 20 years or more, the rnactual growth in technology- and science-linked jobs has been about 4.2 rnpercent per year.  The actual availability of U.S.-born workers in thosern fields has grown at about 1.5 percent per year.  And then when you lookrn at jobs in new areas, in the nanotechnology arena for instance, people rnsay one of the greatest challenges they have is finding a well-qualifiedrn workforce—and that’s at a baseline level; we’re not talking necessarilyrn people with Masters' and PhDs.  At the higher educational levels, we rnreally are not attracting as many young people as we should, rnparticularly to not only get first degrees in these fields, but to move rnon and get graduate degrees.

Now fortunately for us, we’ve beenrn able to attract really exquisite talent from abroad and so that’s been rnkind of the secret sauce that we’ve always been able to attract talent rnfrom abroad.  But you know what?  Other countries, now, they’re rnemulating our model.  They are creating massive research infrastructure,rn building up their universities.  Creating new enterprises with a lot ofrn government support.  And they are beginning to attract many of these rneducated people in the sciences and engineering back home.  But there’s arn global race for talent, so they’re also being attracted to places that rnmay not be back home; but they’re not necessarily countries that are rnwhere we would think. And so that means they aren’t necessarily staying rnhere.

So yes, I think there is still a quiet crisis because rnit’s a subtle point.  It’s quiet because we sort of don’t know what the rnsituation is until its upon us; partly because people quietly retire, rnthere are trends that occur, but we don’t see the real underlying trend rnfor years.  But also, it takes a long time to create a high-functioning rntheoretical physicist or nuclear engineer.  And so it’s a time factor rnthat makes us not see it.

rnSo it’s quiet.  It comes and creeps in on us, but it’s a crisis because rnit turns out that scientists and engineers only comprise about five rnpercent of the workforce.  And so by the time we come to grips with the rnsituation, the fact that it takes so long to really educate a person; torn really be well-grounded in these arenas, it’s a crisis, because we rncan’t fix it fast at that point.

rnQuestion: Have President Obama's policies done anything to improve rnthis?
rn
Shirley Ann Jackson: The Obama Administration has a very rnstrong commitment to science and engineering; to supporting basic rnresearch; to appreciating the role of science and technology and helpingrn to solve some of our greatest challenges; whether we’re talking energy rnsecurity or climate change.  If you witness who the Secretary of Energy rnis and the kinds of things he’s been trying to propagate; if you look atrn who the new Director of the NIH is, the National Institutes of Health, rnand you look at the kind of things that he has done in his career and rnwhat he’s trying to do at NIH, there’s a re-centering on the fundamentalrn role of science and engineering.  But there’s also a lot more support rnfor basic research, but more importantly, there’s the leadership from rnthe top because the President himself speaks about the importance of rnthis.  And in fact, challenges scientists and engineers as well to take rnmore of an active role in reaching out and educating and exciting the rnyoung people then helping people to understand it.  And he’s doing this rnagainst a backdrop, as you know, of a very difficult economic and rnbudgetary situation.  But the scientific community is very much more rnhopeful, I would say.

rnQuestion: In the wake of the recession, how does science education rnneed to change?
rn
Shirley Ann Jackson:  Well, there’s a level at which one rncould argue that all industries to be at the leading edge and for us to rnbe globally competitive and rebuild our manufacturing and our export rnbase have and need a root in the latest breakthroughs in science and rnengineering and, having said that, let me go back to the commentary rnabout the U.S. auto industry and whether we should write it off.
rn
rnYou know, there’s kind of a story that people probably don’t think aboutrn so much and that is 20 or more years ago, the U.S. was very worried rnabout losing its lead and edge in advanced chip... microprocessor designrn and manufacturing, at that point, to Japan.  And so with the governmentrn support, a consortium of what are really some fairly large companies, rncame together to lay out a technology road map as to what the industry rnneeded to do and where the government could support what the industry rnneeded to do to stay ahead of the curve, to sort of catch up as it were,rn and then stay ahead of the curve.  And that roadmap essentially has rnbeen followed and that’s why we have the great Intels and the other rnmajor chip design and manufacturing enterprises still in this country rnand where a lot of the manufacturing, not all of it, but a lot of it rnstill goes on here.  So I wouldn’t quite write the auto industry off, rnalthough there are a lot of structural issues and changes that need to rnoccur.

rnBut having said that, if one wants to think about the workforce of the rnfuture and what kinds of characteristics people need to have: people rnhave to be a lot more intellectually agile than they are because things rnchange so fast, and markets really are global and innovation is rneverywhere, and people, even if they work for one company, are going to rnfind that they’re going to be working with counterparts around the globern and that they’re going to need to at least understand and appreciate rnhow to at least ride the wave of new and evolving technologies to rnoptimize what they do in their own business processes and their own rnenterprises, even if those enterprises are not "high tech," so to rnspeak.  But at the same time, as I always argue, we need more scientistsrn than engineers because the way to really be globally pre-eminent is to rnbe innovative and stay ahead of the innovation curve.  We still are the rnmost innovative country in the world, but where we’ve been lagging is rncontinuing to invest and move ahead in those areas that have kept us rnahead from the focus on fundamental research; having the kind of rninfrastructure one needs to help new entrepreneurial start-up companies rncross the various valleys of death; create the kind of workforce that isrn minimally scientifically literate and out of which, we hope, will come rnmore scientists and engineers.

Recorded May 12, 2010
Interviewed by David Hirschman
Up Next

Getting Students Excited About Science