Kurt Andersen, host of Studio 360 on NPR, is a journalist and the author of the novels Hey Day, Turn of the Century, The Real Thing, and his latest non-fiction book[…]
Go to Profile 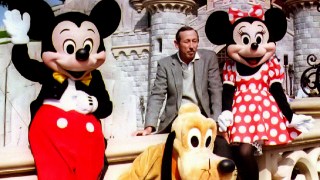 Fantasy-Industrial Complex: How America Got Lost Inside a Dream

Why does America confuse fantasy for reality, in pop culture and in politics? Kurt Andersen can pinpoint the moment it happened.
▸
5 min
—
with
Kurt Andersen

The start of the 20th century was the birth of a strange new reality in the United States. The advent of the moving image, of Hollywood and sudden celebrity, caused a quantum shift in how Americans thought about the experience of life. Actors were elevated to the status of superheroes and demigods, and those left in the obscurity of the masses began to desire that elusive privilege: fame. But where America really went haywire, author Kurt Andersen explains, is when the cult of celebrity and the cult of capitalism merged: it was the opening of Disneyland in 1955. A bizarre reality where advertising met animation. You could buy real wares, from fake characters, in real stores, with make-believe themes. “What happened in Disneyland… did not stay there,” says Andersen. From Mickey Mouse all the way to the White House, Anderson doesn’t find it at all surprising that Americans might have a hard time telling what’s true from what’s false. He calls it the fantasy-industrial complex, and it might just be America’s beautifully branded nightmare. Kurt Andersen’s new book is Fantasyland: How America Went Haywire: A 500-Year History.

Kurt Andersen: All kinds of modern, amazing things were happening at the beginning of the 20th century, especially in the United States of America, and the movies and Hollywood were one of those things that we kind of, I think, we have lost track of what a quantum shift watching movies represented for the experience of life. Sure there had been actors and plays before, but first of all the glut of entertainment that suddenly existed and the almost phantasmagorical quality of watching real people moving around that weren’t in front of you but in some netherworld in film, and they were really in London or India or the Yukon or wherever, and time was suddenly changed, it went from childhood to adulthood—everything about the cinema, we have to understand what a huge change that was and how mutable it seemed to make reality. So you take that—the fact of cinema, TV, video, everything we now for five generations have taken as the way things are—it gave us, and especially Americans, obviously French people and English people as well, this idea that reality was mutable. Then on top of that and with that you have this celebrity culture where there are, by orders of magnitude, suddenly more celebrities. In the 19th century and earlier there were famous people, but just a few of them, and now there were hundreds and then eventually thousands of famous people who were now famous for pretending to be somebody else: actors. That was a strange new condition.

And so for a long time, for much of the 20th century, people looked up to movie stars because they seem to have real potency in this world where individuals seem more and more part of a mass. Here were the people, because they were famous and because we watched them and stared at them and dreamed about them, they were like superheroes or demigods. So by the end of the 20th century or before the end of the 20th century, who wouldn’t—if you’re an American steeped in this movie and television culture—want to be famous? Maybe there’s no reason for you to be famous but, my god, only famous people have real agency in the world. So we got to that point, where fame is its own end. You also—again, there’s advertising everywhere, but advertising and the advertising industry were really an American invention, starting way back in the 1800s when, for instance, the presidential candidate William Henry Harrison was the first marketed, advertised presidential candidate. He was this rich guy who they wanted to rebrand as a humble guy who had grown up in a log cabin, so log cabins became his icon, his branding symbol, and they made real big ones and little ones and liquor and facial creams in log cabin containers, and they made chants and songs, and he won by a landslide over a guy who was actually of humble origins.

So advertising as part of this fantasy-industrial complex that is so American and so defining of America has been a big part of what we’re talking about as well. Disneyland: I love Disneyland, but when it was created in the 1950s, not just as a little amusement park to promote Walt Disney’s animated films but as this other version of reality that was real—it was there, you could go there and buy things at these old-fashioned shops on Main Street USA with actors, but they were selling you stuff. What happened in Disneyland, starting in 1955, did not stay there, and that Main Street USA most of all became a kind of model for how you build shopping centers, how you build suburbs, how you theme everything from restaurants to hotels to shops to clubs. So the Hollywood idea and what came before in pop culture and what came after and, as it expanded to sort of subsume all of American life, is a big part of how we as Americans have become so iffy about telling what’s fake from what’s real, what’s true from what's false.

Babies Are Master Learners: How Adults Can Stimulate Their Innate Learning Skills