Geoffrey West is a theoretical physicist whose primary interests have been in fundamental questions in physics and biology. West is a Senior Fellow at Los Alamos National Laboratory and a[…]
Go to Profile
Videos

Universal Mathematics: The Spooky Uniformity of Life on Earth

Is all life on Earth bound together by mathematics?
▸
9 min
—
with
Geoffrey West

Are we all connected? Mathematically, yes. It might seem like a stretch, but all living organisms on earth are connected by a unified theory. The more into the (metaphor alert) nuts and bolts of it all, the more science is finding just how connected we all are by way of energy and resources being supplied to cells—and by a methodology known as quarter scaling. The larger something is the longer it lives. Let’s say there’s a dog that is 500 times bigger than a mouse: in essence, we can then estimate that the dog’s lifespan will be about 125 times greater than the mouse. An elephant’s heart beats a lot slower than a human’s heart, but our hearts beat slower than a mouse and a dogs. It’s all interconnected!

Geoffrey West’s most recent book is The Universal Laws of Growth, Innovation, Sustainability, and the Pace of Life in Organisms, Cities, Economies, and Companies. 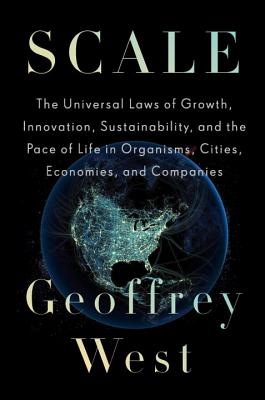 GEOFFREY WEST: So I think it’s one of the more remarkable properties of life actually, but just taking mammals: that the largest mammal, the whale, is—in terms of measurable quantities of its physiology and its life history—is actually a scaled up version of the smallest mammal which is actually the shrew, but a mouse is very close to that.
And everything in between, that they are scaled version of one another and in a systematic predictable way to sort of 80 percent or 90 percent level. So the kinds of things that you might measure might be as mundane as the length of the aorta, which is the first tube coming out of your heart, or it could be something as sophisticated and complex as how long each one of these mammals, for example, is going to live or how long it takes to mature.

So all of these things scale in a very predictable way and they scale in a way that’s nonlinear. So even though it’s simple it’s highly nonlinear, and that can be expressed in the following way.

So perhaps the most well known of these is the scaling of metabolic rate. And metabolic rate is maybe the most fundamental quantity of life because metabolic rate simply means how much energy or just how much food does an animal need to eat each day in order to stay alive. And everybody’s used to that and is familiar with that. It’s sort of roughly 2,000 food calories a day for a human being. So you can ask “what is that for different mammals?” and what you find is that they’re related to one another in a very simple way despite the fact that metabolism is maybe the most complex physical chemical process in the universe. It’s phenomenal because metabolism is taking essentially almost inorganic, something that’s inorganic an making it into life.

And so here’s this extraordinary complex process and yet it scales in a very simple way. And you can express it in English, it can be expressed quite precisely in a very simple mathematical equation but in English it’s—roughly speaking—that every time you double the size of an organism from say two grams to four grams or from 20 grams to 40 grams or 20 kilograms to 40 kilograms or whatever and just doubling anywhere.

Instead of what you might naively expect—double the size, you double the number of cells roughly speaking; therefore, you would expect to double the amount of energy, the amount of metabolic energy you need to keep that organism alive because you have twice as many cells—Quite the contrary you don’t need twice as much. Systematically you only need roughly speaking 75 percent as much. So there’s this kind of systematic 25 percent, one-quarter “savings.”
And it turns out that anything else you measure as I mentioned a moment ago scales in a similar way with this sort of 25 percent role occurring in some interesting way.

So, for example, if you take mammals: we have beating hearts, we have a circulatory system with a beating heart. So every time you double the size there’s a systematic decrease in heartrate as most people are familiar with. An elephant’s heart beats much slower than ours and ours beats much slower than a dog’s or a mouse’s, for example. And that also obeys this kind of quarter-power scaling, so in a very systematic way we see this repetitive nature.

And what is amazing about that is that each animal, each one of these animals—and by the way it’s not just true for animals, it’s also true of plants and trees—but each one of these organisms has evolved by natural selection, each subsystem has evolved evolutionary by natural selection, each cell type, each genome that comprises of the organism has its own unique history that ended up being this particular organism. So you might have expected, in fact, you would sort of think of that (and often colloquially we think of it) as some kind of random process, natural selection.

And that you would therefore have expected, if you look at something like metabolic rate or length of aortas or whatever it is, lifespan—They would sort of be randomly distributed because they would simply represent or reflect the evolutionary history of that organism, or of the components of that organism.

And quite the contrary, as I say, it’s not that. Somehow natural selection has been constrained by some underlying principles. And what I have spent quite a lot of time thinking about and developing a theoretical structure based on underlying principles and put into a mathematical framework for understanding where that regulatory comes from, and why it should be this number one-quarter. Where does that magic number fall—so to speak, arise? And the work that I did with some marvelous biology colleagues, Jim Brown and Brian Enquist, we developed this what I consider very elegant theory: that what these scaling laws are reflecting are, in fact, the generic universal mathematical physical properties of the multiple networks that make an organism viable and allow it to develop and grow and so on. And the ones we’re all familiar with, many of them like our circulatory system and our respiratory system. But our neural system is like that, it transmits information. But these are networks that have evolved to distribute energy from something macroscopic like a heart or a pool of blood down to deliver oxygen to the cells by going through a hierarchy called network delivering as I say oxygen, resources, metabolic energy to the cells.

And it is the universal properties, the universal mathematical properties of those networks that transcend the evolved design. So the same mathematical – now this is extremely important. It’s the same mathematical and physical principles applied to a mammal which has a beating heart as applied to a tree. And a mammal, you know, our circulatory system is a bunch of tubes like in your house the plumbing and the building that we’re sitting in. That’s our circulatory system.

But a tree and a plant, they’re not like that. They’re a bunch of fiber bundles kind of joined together like electrical cables that spray out, and that’s what you see when you see a tree. In each branch there’s actually just these fibers transmitting, transporting fluid to the leaves and so on. And they don’t have beating hearts as we well know. And yet they satisfy the same mathematical principles, and those mathematical principles give rise to this quarter-power scaling in mammals but also in plants and trees. But also in fish and birds and crustacea (in principle) and insects and so on. That’s the idea.

So one of the nice things about this theory is that if you like it’s kind of a unified theory because it brings – since metabolism underlies, you know, pretty much the way we live, the way any organism lives because it is the way energy and resources are being supplied to cells and so forth.

The Science of Temptation: Why You Can (or Can’t) Resist