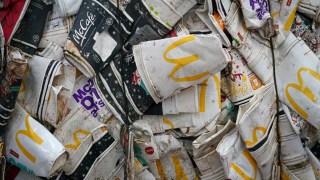 Laurence Gonzales on our culture of garbage

A culture based on the systematic disposal of potentially useful material items inspired Laurence Gonzales to ask some hard questions.

A subtle change in the way they view the world around them.  And I’ll give you a perfect example.  While I was writing “Everyday Survival”, I was taking the garbage out one day and I had this epiphany in which I thought, “Good grief! I’m carrying this sack full of manufactured goods that I have had in my possession mostly for at most a day or two and I’m throwing them into this container, they’re going to be taken out and dumped in landfill somewhere.  What on earth am I thinking?  What am I doing?”  You know, I go to the grocery store and I buy this little glassine box of strawberries and I take it, open it, and dumped the strawberries out.  And then I have this vessel that someone manufactured this beautiful, beautiful object that if you have given it to someone 10,000 years ago, they would’ve thought it was came down from the gods ‘cause it’s so special.  It lasts forever and ever.  You can see through it.  It’s durable.  It’s pretty.  It’s got all these wonderful qualities and what am I doing with it?  I’m keeping it for 5 minutes and I’m throwing it away.  What kind of a culture do I live in that would dictate that I do that?  Because if I don’t do that and if all my neighbors don’t do that, the economy comes through a grinding halt as we’ve all seen.  You know, you don’t spend.  You don’t have an economy.  You don’t throw stuff away in this economy, you don’t spend.  So it’s a culture of garbage.  Well, that little insight changed the way that I behave.  It changed the way that I recycle things.  And it changed the way that I think of the objects in my life and which ones I choose to buy and which ones I choose not to buy.  And so, if in reading this book people can have a subtle change in the way they view their world and not let this automated systems I talked about simply cause them to ignore everything around them ‘cause they’ve already seen it once, then I think I would have achieved something of my goal.