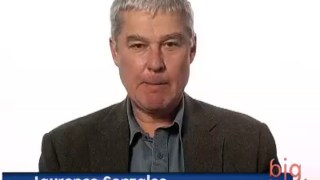 The universities where Laurence Gonzales has taught have replaced the rules of scholarship with the rules of business.

Yes, I do.  I have taught in colleges at various times.  And over the 30, 35 years, whatever it’s been, I’ve seen them go from academic institutions to corporate institutions.  And this is a very dangerous thing.  Academic institutions used to be run according to the rules of scholarship.  Now, they’re being run according to the rules of business.  They’re marketing themselves to students.  They’re packaging courses that are sexy because students will sign up and pay a load of money for them.  This is a dangerous trend in an academic institution.  And it’s going, not at every institution but across the board, you can see this at almost any part of a country now, and that’s just the institutions of higher learning.  I think our different ways of thinking can start very young.  I mean, I have a 5-year-old and I’m teaching him to be critical in his thinking at that age.  He knows, for example, what thermodynamics is and he knows that everything you do produces entropy.  So when you do something, it’s going to cost you something.  And he’s beginning to understand that as a basic concept, which is one of the concepts that underlies my arguments in the book which is you can’t get something for free.  If you’re believing that you’re getting something for free, you’re not really thinking it through very clearly.