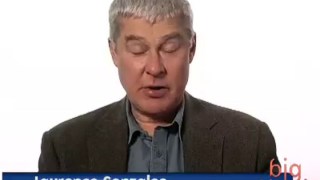 Citing TV as a primary example, Laurence Gonzales says there are simply not enough opportunities for thought.

To make it a more thoughtful society, you have to give people something to think about.  And if you look at our culture, American culture I’m talking about here, although it could be said of Western culture in general, and increasingly around the world ‘cause everybody wants a culture like ours, you know, at least they’re trying to buy all the gadgets that we like to play with.  But you have to give people something other than nonsense to think about.  If you turn your television on at almost any hour of the day, you will find stuff that’s just plain nonsense with very little content and thought that people swallow whole.  If you look especially in advertising, advertising of technologies, you see us being sold stuff that we swallow whole without critical thinking.  This is what I’m advocating, critical thinking.  If you look, for example, at the way drug companies are now advertising prescription drugs to the patients directly, this is an incredibly stupid idea.  I mean, the reason that there are prescription drugs is because you need to be a doctor to understand when they are to be used, and to just advertise them wholesale to people is assuming that these people are so dumb that they’re not going to know that.  So our culture really, the capitalist society that sells us all these goods that keeps the machine working is predicated on the idea that you have to make people stupid enough to swallow this stuff whole without being critical and without saying, “Hey, wait a minute, I was born at night but it wasn’t last night.”  And so, I, as a writer, my effort to make people think is to write a book like “Everyday Survival” in which you actually have to think a little to get through the book.  You know, I hope some people get something out of it.