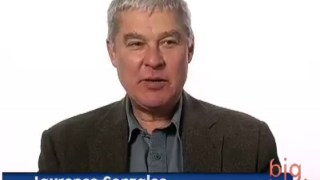 Socrates would say any medium of inquiry is worthless if it’s making us shallower.

If Socrates were here today, I think he would think the scholarship was pretty messed up.  Most people don’t remember that Socrates was against reading and writing.  He thought that that was a bad idea for scholarship and for learning.  His method of learning was, first of all, you had to memorize everything.  You had to have it in your head.  And secondly, you have to walk around town talking with other people about it and they could question everything you said.  They could confront you directly.  He said, “Well, once you have things written down and you lose your memory ‘cause you don’t need to memorize them, you can look them up.  And the other thing is you can’t question a book if you, you know, have something written down.  It’s there and you can’t ask it a question and make it prove itself to you.”  So he saw this as the beginning of a deterioration of learning and thinking and he was right.  The thing we forget is he was right.  But he missed the fact that, of course, there were many benefits of writing things down.  And I always mention that in the, when the printing press was invented, the scholars have the same reaction.  They said, “This is a very bad idea.  We don’t like this.  It’ll cost the spread of all sorts of pernicious nonsense and it won’t be checked by scholars like us so that it’s accurate.”  And, of course, they were right too.  There are all kinds of stuff published that’s nonsense and a lot of it is not checked and so forth and so on.  They, too, miss the fact that it would be a great benefit to society.  So in both these cases, these guys, these people were critical enough and they’re thinking to anticipate trouble from a technology.  And what I say is that we need some of that critical thinking back again.  We tend to embrace technologies sort of unquestioningly.  And, in part, that’s because they’re sold to us that way by marketing.  But it’s a good thing to question these technologies the way Socrates questioned the new technology of writing at that time.  And if he saw what was going on today, he would probably say, “You know, this Internet is a really bad idea.”  And he probably be right in certain ways.  He would be wrong in certain ways and that, you know, it’s a wonderful tool for disseminating information of all kinds.  He would be right in the sense that it tends to make us shallower if we’re not careful, if we don’t use it to augment our scholarship and our thinking, if instead we use it to replace our scholarship and our thinking.