Jennifer A. Doudna, Ph.D., Professor of Molecular and Cell Biology and Chemistry at the University of California, Berkeley, has devoted her scientific career to revealing the secret life of RNA.[…]
Go to Profile 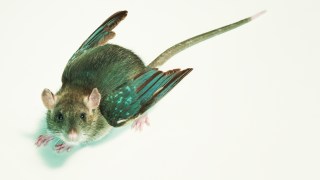 Gene editing tool CRISPR could soon be lifting a page straight out of a Michael Crichton novel.
▸
6 min
—
with
Jennifer Doudna

Gene-editing tool CRISPR is already poised to be one of the biggest inventions of the 21st century, and co-creator Jennifer Doudna already has big ideas for different ways to use it. There’s a potential here, she explains, that scientists could possibly resurrect extinct species… and even invent new ones. The idea might sound wholly familiar to those who’ve seen the modern classic Jurassic Park (featuring Jeff Goldblum at his cultural zenith playing a mathematician, we might add): dinosaur DNA could be reproduced and in 20 years humanity really could have a dinosaur theme park. But Jennifer Doudna also understands how harmful this technology could be if in the wrong hands.

Jennifer Doudna’s most recent book is A Crack in Creation

Gene Editing and the Unthinkable Power to Control Evolution

Jennifer Doudna: Gene drives are ways that a gene editor can be used to spread a genetic trait through a population quickly, and a research lab in California was recently able to use this kind of strategy to spread a trait through a population of fruit flies in a laboratory setting very quickly. And I think what amazed many people—many scientists—was how efficient this was at creating effectively a new strain of fruit flies that had a different genetic trait in every individual.

I think that this potential to use that kind of spreading of a genetic trait is both exciting in terms of controlling vectors that can spread disease, but it also makes a lot of people nervous because of the potential to spread a trait that might become something that would be deleterious somehow in the environment.

So for example, imagine that it were possible to spread a trait that wiped out mosquitoes or created a population of insects that were somehow damaging in the environment. I think that those are applications of this technology that are very important to discuss and to think about before we sort of forge ahead and release animals like that into the environment.

So for people that have seen Jurassic Park (or if you have kids like me you've seen it many times) it's sort of a really interesting idea, sort of this was Michael Crichton's idea in the book and in the movie, to think about being able to take bits and pieces of DNA that come from extinct animals and somehow piece them back together perhaps using sequences of DNA from existing animals to create genomes that would allow once-extinct animals to be alive again—and could that really be done?

And I think that the CRISPR technology offers scientists a tool now where, at least in principle, maybe not to the level that it was in the film Jurassic Park, but in principle could allow introduction of new genes into existing genomes that would recreate animals that have traits that have been lost by extinction.

And so a number of scientists have been thinking about this. I think George Church is one of the prominent scientists who's been discussing this in the context of de-extinction of woolly mammoths, could you actually take DNA that's been sequenced from the remains of woolly mammoths and use elephant DNA to recreate these animals somehow?

And it's sort of a fascinating idea. Now whether that would actually work—I think there's a lot of technical challenges to doing that experiment, but could we do things like bringing back the carrier pigeon or animals that might have gone extinct very recently where we have close genetic relatives that we could actually study?

To me it's an interesting idea because of the potential for understanding genetic networks and what genes are really doing, how they really give rise to certain traits. I think one thing to appreciate is that in most cases the traits that we observe in animals or in ourselves are coming from interactions of many, many genes. It's not just one gene that gives rise to somebody's height or intelligence or anything else, it's really a whole network of genes that are interacting.

And to start to understand that I think would be very exciting and potentially could be done using this kind of strategy of introducing genes from extinct animals back into existing animals. And it's hard to say how soon that will be a reality, but I think the potential to learn a lot about the genetics of living systems is exciting.

I think with any new technology people get excited and they see opportunities not only for doing research in the case of this kind of science, but also for commercial use and to make a profit. And in the case of gene drive this is a tool that could really enable the creation of organisms that might be commercially valuable, and yet one could also say well there needs to be close supervision of that, close regulation of release of animals or organisms like that that are engineered in such a fashion. And I think with any new technology one always has to try to get the balance right. On the one hand we of course want to see technologies and science in general being used to solve real world problems, real human problems. But on the other hand we want to ensure that progress is responsible progress, that we are working together with the stakeholders to ensure that there's not an unintended or even a negative intended consequence of the use of these technologies. How to do that is a big challenge.