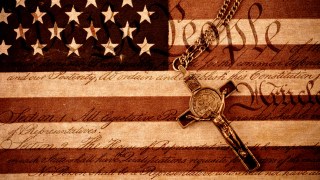 If You’re an Atheist Politician, Don’t Call Yourself an Atheist. It Freaks Religious People Out. – Barney Frank

As religiosity plays a major role in American society, Barney Frank advises other atheist politicians not to draw too much attention to the word "atheist" because it is too often perceived as a repudiation of religion (and, therefore, American values).
▸
3 min
—
with
Barney Frank

As religiosity plays a major role in American society, Barney Frank advises other atheist politicians not to draw too much attention to the word “atheist” because it is too often perceived as a repudiation of religion (and, therefore, of American values). Frank’s reasoning for this course of action stems from a simple guiding principle? Why pick a fight you don’t need to wage? Nothing’s stopping a non-believing politician from legislating in a way that protects the rights and interests of non-believers. But in this current state of society, there are few benefits for coming out and being overt about one’s atheism.

Barney Frank: Well, the problem with atheism politically starts with the phrase. I have advised people who are themselves non-believers, not to use the word atheist; it has a harshness to it. It is a repudiation, not necessarily literally, but it comes across as a repudiation of religion and religion is very important to many people. It's a source of good feelings for many of them. It is not always, unfortunately, a motive for good behavior. I have noted that in the international situations religion is sadly more often a cause for people to shoot each other than to help each other. When you get splits within two countries or even within countries where it's Catholics versus Protestants, Jews versus Muslims, Buddhists versus Muslims as it has been in Myanmar, Hindus versus Muslims, there's a very sad extent of that. But religion is important to people. It has a history of being seen as a source of good behavior. America's history has given religiosity a greater role than some other places.

And from the politician's standpoint the question is why pick a fight that doesn't have to be waged? I never expressed the fact that I was not a believer in any theistic approach because it was never relevant. I did fight very hard throughout my 40 years in elected office to prevent rules and laws that put nonbelievers at a disadvantage. I've fought very hard against the establishment of religion, against people being forced to subscribe to religious views to get certain benefits, et cetera. But beyond that it didn't come up. In my own case there was another reason why I didn't talk about it; I'm Jewish. Obviously there's a strong terrible history of persecution of Jews. Judaism is a religion, but it is also an ethnicity. And for many of us who are Jewish in America today it is the ethnicity more than or even to the exclusion of religion that identifies us. But for me to have, when I was a public official I was the first Jewish person to be elected to the Congress in the United States since 1884. It would've looked as, or to some people it could have been distorted to be a kind of I'm separating myself from the Jews and I wouldn't want to do that. Even today, as secular as I am, when the high holy days of Yom Kippur and Rosh Hashanah come up, I am not going to be seen in public doing things that other Jews won't do for religious reasons. I don't observe them myself in a religious way, but I would not want my behavior to be used to embarrass or discomfort anybody who does religiously follow them.

Are Trolls Just Playing a Different Game Than the Rest of Us?