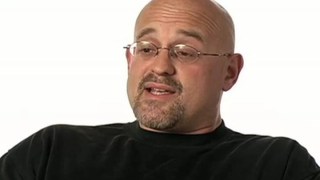 Does religion inform your worldview?

Belief in something we absolutely can’t see, for which there’s no evidence, cuts against the grain of what it means to be a scientist to me.

Question: Does religion inform your worldview?

Dan Gilbert: Well I find myself cursing them more often than not. I’m sure religion and faith had important roles to play in human history. In my view at present, they’re far more destructive than constructive. Now I say this with a bit of trepidation because religion means many, many things. Certainly some aspects of religion are things we would all applaud … the idea that we have a moral code that we try to live by. But I don’t think that’s what you mean by “religion”. Religion … by “religion” we mean deism. We mean belief in something we absolutely can’t see for which there’s no evidence. To me this cuts against the grain of what it means to be a scientist. I don’t think people should not believe in God; but it seems to me to have a very strong in that for which there is absolutely not one shred of evidence goes against the very meaning of … of … of rationalism. Well certainly science and religion are the two big ones that come to mind, and I think, unfortunately, pulling us in opposite directions. I mean for me, the large story that has been playing out for several centuries, and that continues to play out today on the world stage, is the battle between the rational and the irrational. For me, science represents one of these. Religion, I’m afraid, represents the other. So I think it would be hard to tell the story of human civilization without talking about science and religion. Very easy to tell most of the story without talking about these two things. there are certainly signal events in both science and religion. As a scientist, one can point to Darwin. One can point to Einstein. I don’t think single events are what either of these forces are about. I think these … these two things are ways of thinking. It’s not about the discoveries that science has produced because, as I always tell my students, half of what I’m going to teach you today is wrong. I just don’t know which half yet. You know, science is about constantly revising our beliefs. So I wouldn’t point to single discoveries and say, “Wasn’t this important?” What science really has to teach us is a way of knowing. And it’s a way of finding out what the truth is about the world. Science is not infallible, but it’s … it’s as close as we can get. You know, Winston Churchill, I believe it was, who said, “Democracy is the worst form of government except all the others.” Well science is the worst way of knowing except for all the other ways of knowing.

What forces have shaped humanity most?