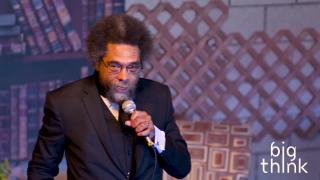 Cornel West: Hope Is an Action We Can All Take

Cornel West talks about everyday poets, being the best of the human species, hope, what wokeness really means, and revolution.
▸
10 min
—
with
Cornel West

Institutions—governmental, religious, financial, even revolution itself—have a way of turning stale and sour. “Thank God for the history of the heretics and the blasphemers. That’s my crowd,” says Dr. Cornel West. Quoting from some of history and literature’s greatest thinkers and doers, West presents a poetic lecture on the role of hope in America’s past and its future, and how to make your voice matter.

This video was filmed at the Los Angeles Hope Festival, a collaboration between Big Think and Hope & Optimism, a three-year initiative which supported interdisciplinary academic research into significant questions that remain under-explored. For more from Dr. Cornel West, head to cornelwest.com.

Cornel West: Shelley was right when he said poets are the unacknowledged legislators of the world. Yes Percy, we appreciate that. We understand that. We know they published that after you died, but we got the memo.

By poetry he wasn't talking about versifiers, he wasn't talking about folks who write words on a page; he was talking about all human beings who muster imagination and empathy to conceive of an alternative reality given the nightmarish catastrophic driven realities most of us have to come to terms with, which means to live a life of a certain kind is to be a poet, an artist of life, an artist of living, one who through one's deeds and actions and witness exemplifies an imagination and an empathy that is subversive in terms of relating to the past, which has fortitude and courageous in the present to pass onto the next generation, some wind at their back.

If you want to know what hope is just zoom in on August of 1955 with Emmett Till's mother when she's asked to speak before not just public but the whole world, because the cameras were there from all the various nations and there's her baby in the coffin with the coffin open. They tried to make sure they kept the coffin closed. She said, “No, they're going to keep it open. We just fetched this body from the Tallahassee River in Jim Crow gut-bucket Mississippi, killed by cowardly hateful American terrorists, white supremacists. We're going to keep it open. This is my only baby.” What you got to say, Mamie Till, to the world?

That's being a hope, and it's an echo. That magnificent moment in Reinhold Niebuhr's 1932 classic 'Moral Man and Immoral Society' where Reinhold says: any justice that's only justice soon degenerates into something less than justice. Justice must be rescued by something grander and deeper than justice, mainly love. Love, justice: not identical, but indivisible.

When Martin says, "Justice is what love looks like in public," he's talking about it in the legacy of Jerusalem, not the legacy of Athens. For Plato justice is a norm to giving and having one's due. But in Amos justice is a force. It's a major force. It's an answer to the question that Walter Hawkins in his song 'What Is This?': 'How do I account for this fire I have inside of me that won't give me any peace? I've got to somehow get it out. And if I don't do something the rocks are going to cry out.' That's existential.

Look at the history of communism, my god: every self-conscious Marxist find him or herself usually having to leave the Communist Party in order to be true to the best of Karl Marx. Why? Because of the ossification and petrification of institutions in that way.

Hope is existential. I keep coming back to that point. And the issue of integrity that Du Bois raised is quintessential. Of course we live in an age—of what? Cupidity: love of money. I didn't say stupidity. That's too easy—even though that's part of the problem—but it's cupidity. Because there wouldn't be a Donald Trump if it wasn't for Wall Street, corporate elites and a Republican Party that was so complicitous and willing to adjust themselves to it, or even a Democratic Party that's too milquetoast and acts like they want to be part of the resistance but usually have to be brought in kicking and screaming.

Integrity over against cupidity and venality. And the saddest feature of our present moment, and that's why you all are so visionary, because you all came up with this during the age of Obama. See for a lot of people they didn't need to talk about hope under Obama because Obama was already providing the hope. Of course I didn't get that memo, but that's another lecture. That's another lecture. We're not going to get into that tonight. No. No. Uh-huh.

I'm suspicious of anybody tied to Wall Street military industrial complex, assassinating American citizens without accountability. I'm critical of anybody, anybody. The top one percent get 95 percent of the income growth, and 94 percent of the jobs that you brag about are short-term, temporary, precarious jobs and somehow you're going to talk about the low unemployment rate. Why don't you just take a look at these precious folk in these communities dealing with these two or three jobs trying to put it all together. Start with the university with adjunct professors.

Commodification, militarization and then, of course, niggerization. What is niggerization? The attempt to make sure that those Sly Stone called “everyday people” are so scared and intimidated and afraid and feeling so hopeless and helpless that they'll never straighten their backs up. They're walking around feeling as if they can't make a difference. Their voices don't matter.

You can hear brother Martin Luther King saying from the grave: “Anytime ordinary people straighten their backs up they're going somewhere, because folk can't ride your back unless it's bent.” And that's an echo of Thoreau and Walden when he talks about the sleepwalkers, and as they sleep the folk are walking on their backs and when they wake up and stay woke—and not just stay woke the way our precious young folk talk about Black Lives Matter—but stay fortified as you are woke. Then the folk who are walking on your back find themselves in precarious situations. That's called revolution. Revolution in mind, revolution in values, revolution in priority. It's a transformation of self and community and society, and there is no transformation without—positive transformation—without this dialectical interplay of love as a form of death, from which hope emerges in the form of action.

How managers give raises, and why women must ask for more