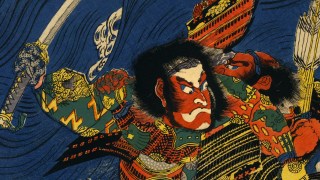 America today has normalized crimes, both physical and spiritual, says Cornel West—and being indifferent to that is the worst of all evils.
▸
11 min
—
with
Cornel West

There is a spiritual war happening in the United States, and to be silent is to be complicit, says Dr. Cornel West. He takes his starting point at the elimination of arts programs under Reagan in the 1980s, and traces how that lack of spiritual nourishment has created a society of solitary nomads where once there was community. It has created consumers where once there were citizens. What must fill that emptiness is hope, West suggests—and hope not as a wistful wish for a better future, but as an enactment of a better future through action. Quoting from some of philosophy and music’s greatest thinkers and doers, West presents a lyrical lecture on the role of hope in the battle over the soul of Americans, and American democracy.

This video was filmed at the Los Angeles Hope Festival, a collaboration between Big Think and Hope & Optimism, a three-year initiative which supported interdisciplinary academic research into significant questions that remain under-explored. For more from Dr. Cornel West, head to cornelwest.com.

Cornel West: What does it mean to learn how to die in order to learn how to live? That's platonic isn't it? Philosophy itself is a meditation in preparation for death. Montaigne says the philosophizers learn how to die. Seneca says he or she who learns how to die unlearns slavery because art, paideia—deep education, not cheap schooling—deep education is about a critical self-examination of that which is inside of us that needs to die. The fears. The cowardice. The complacency. The conformity. The assumptions and pre-supposition, the prejudices and pre-judgments that we have that need to go. James Brown called it 'give it up, turn it loose'. It needs to go. Just like falling in love. You fall in love with somebody, something has died in you.Anne Carson understands this well in her classic; something's died in you. The egoism, the fear, the narcissism—I know a lot of people don't undergo full-fledged death, but it's an effort because you're now entangled with a new self and that new self means you have been transformed and lo' and behold you walk around with a smile on your face feeling good before Sappho's bittersweet hits you.

That's part of love too, isn't it? If bittersweet hasn't hit you it's just sentimental. We're not going to go into that though.

But the connection of learning how to die and the saddest feature of our moment, in regards to Du Bois's first question, is that so many young brothers and sisters of the younger generation find themselves so far removed from the best of their past, far removed from the best that has gone into the shaping and molding them, that all they have relation is market forces, market forces, market forces. Stimulation, titillation. They're hungry for care and nurture, hungry for something deeper. That's what the spiritual and moral awaking young people in the last five or ten years is all about. The hunger for what Ashford and Simpson called The Real Thing. And what is the real thing? Well, it's something that is dynamic, you never get your hands on it, it's intangible but it has everything to do with the ways in which love, the ways in which justice in motion generate hope, generate encouragement, generate a certain sense of enthusiasm for what is to come. Anticipation of the not-yet rooted in the ugly what-is. And Ernst Bloch and others talked about it in the classical philosophy of hope. The volumes on philosophy of hope.

That's what Du Bois has in mind with integrity. And our young people these days more and more—I've spent a lot of time, in fact I've shifted most of my lectures now to both prisons and high schools and junior highs. They're so hungry for something that pierces through the spectacle and the image. They want something that they can hold onto existentially. And that's why the music is a fundamental battlefield. That's one of the crucial sites of the spiritual warfare. It's no accident they eliminated arts programs in the 1980s under Reagan. Trumped: narrow their imagination, attenuate their empathy. Let them just be bundles of desires that these corporations can manipulate in order to convince them to be only consumers so that the profits can go up, we can push the workers against the wall and therefore think that we are actually sustaining a democratic experiment rather than undermining its soul and ending up with a semblance and a simulacra of democracy because you no longer have citizens you just have consumers. You can't have a democracy with just consumers.

And what was the response? Oh here comes hip-hop. Jesse Rose, Brother André, magnificent, why she laid it out to 25 years ago. You eliminate the art program? Okay we're not going to produce anybody that sounds as good as Sarah Vaughan or Donny Hathaway anymore; some of them lucky to sing in tune, because they haven't been taught well. They don't have examples because they're no longer in churches. If they aren't in church where are they going to get it? They're going to get it on the radio but lo' and behold they can make more money, by not necessarily imitating the best. But they did anyways connect the best. That's why they went to Sly Stone, that's why they went to Curtis Mayfield, that's why they went to George Clinton, that's why they went to James Brown, they went to Aretha, they sampled it, they couldn't play it anymore, there's no instruments to learn how to play. So they had to sample it and use their orality and the genius of their language to keep the tradition alive. And what happened 15 years later? You don't even have any groups that sing together anymore. No Dramatics. No Delfonics. No Main Ingredient. No Whispers. No bands like James Brown or Lakeside, it's all computers and individual isolated nomadic individuals. That's spiritual warfare. You disenable the spiritual armor that's kept a people going because usually that's all black people have had, is our voices and each other. No land. No territory. No rights. No protection from the state. But at least we had our voices that preserved our dignity, our sense of style and our empathy. What happens when that is more and more stripped away? Then you're going to have a Hobbesian war of all against all, which is in part a description of where our precious poor and working class youth of color and poor youth have to live every day, and there's no serious discussion about it. Democratic Party, Republican Party. Thank God for Bernie Sanders but that's another lecture too.

Let's bring this to a close. The first question is how shall integrity meet oppression? Second question, what does honesty do in the face of deception? Thank God for the best of the artists. What does it mean to be candid in an age of mendacity and criminality? Crime has been normalized. No serious talk about drone strikes, even though crimes are taking place all the time. How come? It's normalized! It's naturalized. We've just come to accept it. No, that's catastrophe. You don't kill innocent people. It's wrong. It's more than wrong, it's evil. Don't get used to evil. Indifference to evil is more invidious than evil itself, says Rabbi Heschel. He's right about that. And William James says indifference is the one trait that makes the very angels weep. He's right about that. We have normalized criminality.

Last couple of days two more policeman off, right? Killing the young black folk, just normal. Just normal. Everybody knows if that kind of killing was going on in Beverly Hills, sookie sookie now. Shoot, there would be major moral outrage in every corner of the country. "Don't be killing these upper class white brothers and sisters like that. They're human beings." What about Jamal the teacher, what about Juanita and Carlos? What about our indigenous brothers and sisters locked in these reservations? You normalize that and just keep moving. You deodorize it because you're afraid of the funk of your country. You don't want to deal with the funk. Well, you can't talk about hope without aspiring to be a funk master. That's what the funk is all about. Samuel Beckett called it the mess.

Third question: what does decency do in the face of insult and assault? What is indecent, callousness and indifference toward the poor and vulnerable? Last question: what does courage do in the face of brute force? Hope is about being, doing and acting, embodying. Connected to quest for integrity, honesty, decency and courage plus magnanimity, namely fortitude. So in the end it's not about how sophisticated my discourse on hope was, it's about at your funeral: "She lived a life in which she was a hope and she generated hope in others." That's Curtis Mayfield saying: keep on pushing. It's not a discourse on pushing. It's an enactment. In the mess, in the funk, in catastrophe, in domination, insubordination to not allow any of them to have the last word. There is no hope without a wrestling of despair. It's like Jacob in the 32nd chapter of Genesis where he's wrestling with that angel of death in the midnight hour and he emerges as God wrestler, that's the definition of Israel, God wrestler with new energy. That's not discourse solely. I'm not against discourse but discourse can become such a distraction.

And we live in a culture that specializes in weapons of mass distraction as well as weapons of mass destruction. And it might be the case that we lose. Now, in America to talk about losing is always a dangerous thing because we live in a superficial culture of winners. We've got to be with the winner. We've got to be with the winner. No, there is something about acknowledging that you might lose that gives a gravitas to what you're doing. And then we may be surprised by the joy of the process and sometimes you'll be surprised by some of the concrete victories.

Good Journalism Is Like a Science: It Tries to Disprove Its Hypotheses