Clint Smith is a teacher, poet, and doctoral candidate in Education at Harvard University with a concentration in Culture, Institutions, and Society (CIS). He serves as a resident teaching artist[…]
Go to Profile
Videos

How Black Reality and White Reality Differ, from Growing up to Parenting Kids

Writer and Poet Clint Smith on the moment black lives began to officially matter, and the long history of pre-smartphone police brutality and state-sanctioned racism that preceded it.
▸
6 min
—
with
Clint Smith

Although Thomas Jefferson is a beloved founding father, there is no doubt that he was a flawed product of his time. He believed in slavery, and in the idea of Caucasian superiority. The arrogant notion that black lives were lesser lives was the key ideal that allowed slavery to happen. When we look at people in history, we don’t often look at the full scope of their character – it’s a buffet of remembrance, and the appetite is usually for glory and good deeds. As Dan O’Brien, humorist and writer for Cracked said in an After Hours episode, “[Thomas Jefferson] was forward thinking and awesome in the 18th century, but he is a racist, cartoon villain by today’s standards.”

While America has strived to progress against the laws and ideology of then, it’s proving difficult to transcend. Just recently, the KKK in Atlanta, Georgia, passed out fliers near Piedmont. The next morning, a young black man was found hanging in Piedmont Park. Police ruled it a suicide, but because #PiedmontHanging went viral, the case was handed over to the FBI. In this day and age, black lives are still tragically lost to antiquated and violent biases. Writer and National Poetry Slam champion Clint Smith notes that there is a general attitude of shock towards the Black Lives Matter issues, as if they have sprung up from nowhere, but much like the Piedmont hashtag, it’s the technology that’s finally catching up to the issue, creating a wider audience for wrongdoings the nation has been blissfully unaware of. Visibility is finally exposing violence.

Clint Smith points out that there’s an aspect of parenting that is unique to the black community. He recalls his parents teaching him that no matter how polite, well-articulated, or sharply dressed he was, he would be judged by his skin. People were going to cross the street to get away from him at night, and parents have the hard task of making sure their children understand that it is not their fault. That their inner worth isn’t compromised or turned bitter by ingrained discrimination.

Parents must talk to their children about racist mindsets and brutality, warning them from going to parks, or making sure they know to travel with friends rather than alone. Parents have to teach their children that if they are of color, then statistically, they’re more at risk when dealing with officers of the law than a Caucasian child. Hopefully the technology that has exposed the state-sanctioned violence that has been happening for centuries makes that conversation easier.

Jumping on the momentum of this exposition, Clint recommends a simple step one: listening. Acceptance comes from understanding. It’s important to recognize the issues by stepping out of the comfort zone, so challenge yourself to see things from another person’s eyes.

Clint Smith’s book Counting Descent is out 15 September, 2016 and it available for pre-order now. 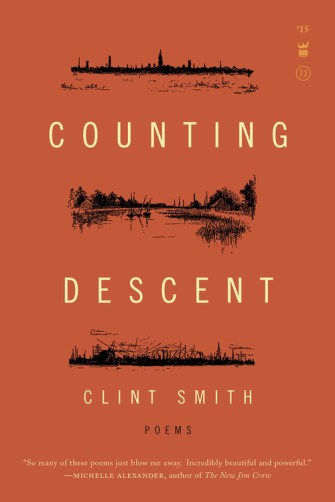 Clint Smith:  In Thomas Jefferson’s memoir, Notes on the State of Virginia. He wrote that the slave is incapable of love. The slave is incapable of possessing and sustaining complex emotion. And that black people are inferior to whites in both the endowments of body and mind. And so for me that’s interesting because the man who was largely considered the intellectual founding father of this country responsible in large part for the conception of the Declaration of Independence and the Constitution didn’t think I was fully human. He didn’t think that I was capable of loving my mother. Didn’t think I was capable of loving my sister, my brother, my partner. Didn’t think I was capable of having passion, of creating art. And so there’s, you know, an entire history from the very inception of this country of black people being dehumanized by the state and people who represent the state.

And so that’s why I think it’s important to have this socio historical context and understanding so that when we see a police killing black men and women in the streets we recognize that this isn’t sort of something happening out of nowhere. That this is actually consistent with the narrative that has been given about to black people throughout this country’s history.

And so it’s part of what’s happened now is that we live in a hyper documented era in which everything is being captured on camera phones and in videos and gone viral and shared on different social medial platforms. And a lot of people are saying where did all this come from. Like how are the police doing this. Like why are they doing this. This just happened out of nowhere. When actually this has been happening for an incredibly long time in black communities. We’ve been experiencing disproportionate incarceration. We’ve been experiencing stop and frisk. We’ve been experiencing police brutality on an ongoing basis for decades and decades and centuries if we’re being honest. And what’s happened now is that now there’s sort of these primary sources, so to speak, these empirical evidence of these events transpiring in America and the world is being forced to like look themselves in the mirror and reckon with how so many of us have been complicit in allowing such a thing to take place for so long and to really be forced to ask ourselves what are we doing or what are we not doing to allow this state sanctioned violence against black and brown bodies to continue.

Black children in this country in part, you know, necessitate a different way of means of parenting it the sense that they – it is important to inform a black child of the realities that exist around them without making that child feel as if it is their fault, right. Like racism isn’t a child’s fault. Systemic oppression isn’t a child’s fault. At the same time you have to teach that child how to navigate a world that is often taught to fear them. My mother and my father had ongoing conversations with me throughout my childhood and my adolescence and my teenage years. And even now as a young adult about understanding the way that I was seen even if I wasn’t able to see that myself. To recognize that when I went out with a group of my white friends or when I – if I’m in a an interracial relationship or if I am engaged in certain activities that those things are perceived differently because I am a black man and that the United States and the world has certain sort of stereotype or caricature of who they believe black men to be. And that there are people judging me before I ever open my mouth. That there are people who have decided who I am before I’ve ever had an opportunity to show them or to engage with them. And that this exists in every sort of realm of class.

And I think that was an important thing for my parents to teach me as well as that, you know, I come from a home with two parents with professional degrees and I attend Harvard University where I’m getting my doctorate. And I think a lot of people can operate under this assumption. They’ll say oh Clint. You made it. You’ve transcended, you know, racism and you moved beyond these like oppressive forces and obstacles that have sought to keep you down. And the reality is that’s not true. The reality is that I still get followed around in stores wearing my Harvard paraphernalia. The reality is that I still can’t catch a cab on Massachusetts Avenue. The reality is that there are people who, you know, white women will cross the street when walking towards me on the sidewalk at night time. And it doesn’t matter where I wear my pants. It doesn’t matter, you know, how well I speak or how smart I am or, you know, what my house looks like. Because I’m a black man and that is the first thing people see. And that it immediately for them it triggers an implicit biases that they have been socialized to believe about who we are and what we do or do not do.

I think oftentimes it’s easy for us to exist in a bubble and not to move beyond our own reality and to step outside of our shoes so to speak and, you know, walk around in someone else’s. And, you know, some people simply don’t interact with people beyond their own demographic whether that’s socioeconomically, racially, culturally. And I think the only way that we can understand what is taking place in other people’s lives is to listen. And I grew up in a family where listening was the foremost important thing we were taught to do. You have to humble yourself in order to recognize that you don’t know as much as you think you know. And whether that’s listening to my grandfather at the dinner table as he went on and on and on. I love him dearly. Or whether that’s listening to a classmate explain what a hijab is when I didn’t understand why someone would wear a scarf over their head, you know, in fourth grade. I think all of these – we have to be concerted in taking all of these opportunities to recognize that our reality is not everyone else’s.