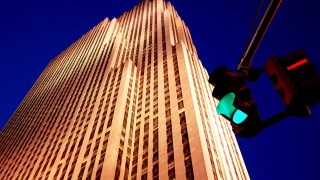 Some believe “conscious capitalism” is too idealistic and can’t compete in the marketplace with pure-profit companies. But when you work from a higher purpose you unleash greater degrees of commitment, loyalty and creativity in the workplace.

Question: Will focusing on the long term reduce short-term profits?

John Mackey:  You’ve just articulated what I call the trade off myth.  The belief that all this sounds very good, very idealistic, but it won’t compete well in the marketplace and when it runs up against a business that is not handicapped with this idealism then it will be in trouble.  Nothing could be further from the truth.  It’s the exact opposite... that in fact the conscious business has competitive advantage.  When you work from a higher purpose you unleash greater degrees of commitment, greater degrees of loyalty and greater creativity in the workplace and that gives competitive advantage.  When you work from the stakeholder model, you understand that you’re trying to optimize the entire system.  You are able to do that in such a way as when you optimize the entire system you also optimize the value that you’re creating for the investors as well.  The business tends to flourish at a higher level, so in fact, the conscious business will win in most instances, all other things being equal.  It will win in competition against less conscious businesses and that is why I'm confident that over the long term conscious capitalism is going to triumph.  I believe it will become the new paradigm in the 21st century, not because it’s more idealistic or it sounds better—it will become the dominate paradigm simple because it will win.  It will win in the marketplace. And nothing succeeds in capitalism more than success itself, so good ideas that work spread. And the competitive nature of the marketplace is going to lead to these competitions between conscious businesses and less-conscious businesses and the conscious businesses, all other things being equal are going to win most of those battles and so fairly quickly meaning when I say quickly I mean 25, 30, 35 years we’re going to see more and more and more conscious businesses and we’ll make this shift towards conscious capitalistic society.