Blockchain simplified: How it eliminates the middleman

What's the big promise of blockchain in business? Its ability to eliminate the middle man.

Tony Saldanha is a Fortune 25 executive in the Global Business Services (GBS) and Information Technology area. During a 27-year career at Procter & Gamble, Saldanha ran IT and GBS in every region of the world, helping create a multi-billion dollar best-in-class operation. He currently provides advice to boards and CEOs in Fortune 500 companies on digital transformation, especially on internal business operations.

TONY SALDANHA: Blockchain is most commonly known because of bitcoin, the cryptocurrency. And by the way they're very different things. So blockchain is the underlying programming on top of which cryptocurrency, bitcoin, has been developed. Let me distinguish the two. Bitcoin is just one little application of blockchain. It is something that most enterprises will shy away from because it is speculative and I'm not here to preach that companies go out and start trading using bitcoin. That would be a mistake. Blockchain is basically, you know, think of it as an excel spreadsheet. It is basically a big, big ledger in which everybody can put transactions but none of the sales, none of the values of those transactions can be messed around with, can be changed without, you know, everybody else saying oh, wait a minute. That particular sale was changed.

And because of that it is known to be unhackable. Now, the value of having an underlying platform that is available to the entire world to see if you have the appropriate kind of authorization and is known to be secure is obvious, right, because we know one of the biggest challenges when it comes to technology is somebody changing the values of my data. If you have an underlying platform that's known to be unhackable that provides a huge competitive advantage for most people. So potential users of blockchain could be everything from, you know, let's take a voting mechanism. By the way blockchain is being used for voting in places like Dubai for their stock exchange or even Latvia, Lithuania and Estonia for their actual people voting processes.

But there are more mundane uses of blockchain. You could use blockchain, for example, for intracompany financial transactions between the companies and both within companies as well. So instead of having your money go from your company to a bank to another company what if there was a common platform where you could actually have the best information that could not be hacked. That would eliminate the middleman. That is the promise of blockchain. It has the ability to eliminate the middle person because everybody has equal access to one version of the truth.

Why Digital Transformations Fail: The Surprising Disciplines of How to Take Off and Stay Ahead 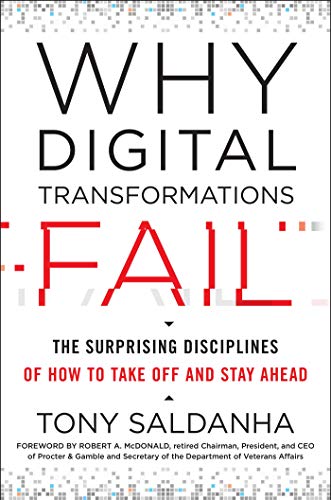 Why Digital Transformations Fail: The Surprising Disciplines of How to Take Off and Stay Ahead
List Price: $28.95
New From: $18.78 in Stock
Used From: $14.15 in Stock