It is often said that blockchain technology could one day revolutionize a range of industries, from global payments, energy and even the election process. However, one sector in particular that is somewhat under-discussed is the gaming space.

Blockchain is the technology that supports cryptocurrencies such as Bitcoin. It’s basically a giant accounting ledger that records each and every transaction that is processed by the system, and it’s extremely secure. Moreover, blockchain requires no third party to verify transactions, as that role is left to a group of online volunteers known as “miners”.

So how does this link in to the ever growing world of gaming, an industry that generated $108.4 billion in 2017 revenues? 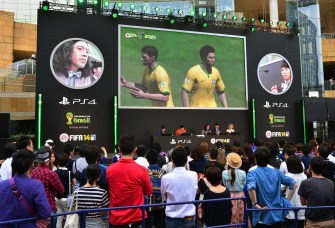 Incentivization within gaming is a crucial selling point for many leading titles. For example, players of FIFA Ultimate Team, a hugely popular mode within the FIFA soccer range, are given the opportunity to earn FUT coins while navigating through the game. However, other than allowing the player to purchase additional player packs, these FUT coins have no use outside of the game.

Blockchain uses a digital token system that once listed on a third party exchange, allows users to exchange them for other cryptocurrencies such as Bitcoin, or even real-world cash. As a result, the future of competitive gaming built in collaboration with blockchain could reward successful gamers with in-house cryptocurrencies that have real-world value.

One such example of this is the Huntercoin project. The blockchain-based gaming world allows players to earn its native HUC coin by competing with other players.

Similar to the FUT coins, gaming skins are a hugely popular way for players to earn in-game rewards. Essentially, skins are a customizable reward that allows players to change the appearance of a particular in-game feature, such as a character, vehicle or weapon. This is a surprisingly lucrative industry, for example, in early 2018 a Counter-Strike: Global Offensive (CS: GO) player sold a weapon skin for $61,000!

However, some would argue that these gaming rewards are opaquely controlled by those that own the title. As blockchain does not require a third party to facilitate the transferring of digital assets, players would be free to trade in-game skins on a peer-to-peer basis, gaining full control of the skins they have earned.

Earlier this year, an interesting report surfaced regarding a Fortnite player that had his account banned by the developer. The ban centered on the player’s attempt to sell his gaming account, which contained a range of skins, accessories and other in-play rewards. As many titles do not offer a facility to buy or sell established accounts, players often have to turn to the unregulated black market where, as there are no safety mechanisms in place, they face the risk of getting scammed.

In contrast, blockchain provides a transparent escrow-like system that allows digital assets to be transferred without the requirement for an intermediary to validate the transaction. As a result, gaming developers can utilize blockchain tech in their network, creating safe, secure and free marketplace to buy and sell accounts, rewards and skins.

Players that prefer to obtain instant in-play gaming add-ons rather than attempting to earn them through successful game-play sometimes have the option to purchase them directly from the developer. However, one such qualm that this model presents is that players do not have the ability to transfer these items to additional titles. For example, a recent study found that 62% of participants would feel that in-game purchases would be better value if they were able to use them across multiple games.

By utilizing the blockchain, gamers would be able to transfer digital items with ease, without needing to go through a third party. Ultimately, this could work in the favor of both the player and the gaming developer, insofar that it could encourage an increase in spending. 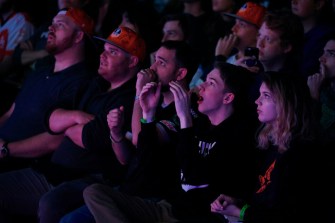 Fans look on during the FACEIT ECS Season 6 eSports finals between Astralis and MIBR on November 25, 2018 in Arlington, Texas.

Competitive gaming, otherwise referred to as eSports, are currently experiencing growth at an exponential rate. In fact, total eSports revenue is expected to exceed $900 million by the end of this year, a sizeable increase from 2016’s $493 million. Player-to-player competitiveness within the gaming sector has never been stronger.

One organization that has recognized this demand is Unikoin Gold, a blockchain-based platform that allows players to gamble on the outcome of games. Unlike previous attempts to facilitate this market, Unikoin Gold has not only formed partnerships with leading titles such as Dota 2 and League of Legends, but has also acquired a full gaming license from the Isle and Man.

A somewhat new market for video game enthusiasts is that of online streaming. Gamers upload live recordings of their game-play activities, alongside ongoing audio commentary, to popular third-party platforms such as YouTube or Twitch. However, the current state of play sees vloggers lose an unfair percentage of their earnings to the platform that hosts their video. Moreover, those that are fortunate enough to receive revenues for their gaming streams are often required to have a significant following which is higher than five figures, something that many gamers fail to achieve.

One company looking to put control back in to the hands of the gaming vlogger is AQER. The platform aims to provide a fairer and more transparent earning system based on blockchain. The project’s CEO Phillippe Perotti has stated that:

“Inter-mediation in the vlogging or streaming industry is done poorly in many ways. Pricing, for example is neither fair nor transparent. Streamers and vloggers do not know how to price their content, and brands take advantage of them. The lack of pricing transparency between vloggers grants brands a lot of leverage over them.”

Blockchain could help mitigate these issues and give gamers opportunities to get their fair payment without being taken advantage of.

It’s safe to assume that gaming is here to stay, and with it many new jobs and opportunities are on their way, whether in building games or in being professional gamers. It’s even possible that within the next few years gaming tournaments will become as mainstream as any other sporting events, with many major gaming events already being held and watched by millions online. Blockchain is already disrupting the sector in many ways and will be the door opening the gaming industry to new opportunities, but exactly what the future of this promising combination looks like only time will tell.

How the Blockchain revolution will decentralize power and end corruption

Flow occurs when a task’s challenge is balanced with one’s skill.
Hard Science

A levitating vehicle might someday explore the moon, asteroids, and other airless planetary surfaces.
Up Next
Health

Can a party drug stop the increasing rate of suicide?