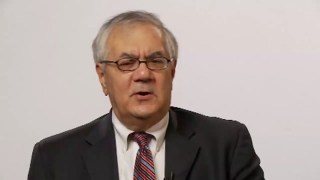 His hope is that by March 2010, a new entity will be charged with looking out for systemic risk in the economy.

Question: When do you expect financial reform to be enacted?

Barney Frank:  I'm hoping it'll be done in March.  The senators are working hard.  Senator Dodd has been doing a very good job, but he does have the problem of the 40 vote barrier.  It's unfortunate that the Constitution has been amended de facto to say that you need 60 senators to pass something.  I don't think that's the spirit of majority rule, but that's where we are.  He's working on it and we've been in touch.  I expect him to be able to get a bill done by March.  We have the February break coming up and I do think the bills will be close enough.  There's a great similarity.  We've been working together, working with the administration so that it won't take us more than a week or so to reconcile the two, so I am very hopeful the President will assign that before we break for spring.

Barney Frank:  It's going to be a significant improvement in every area.  There will be much tighter regulation of derivatives which caused a great deal of problems.  Most importantly, there will be an entity, probably a counsel of the existing Federal Regulators, who will be charged with something that no one was charged with before.  Looking out for systemic risk, looking out for that pattern of activity or individual entity that could cause such problems that the whole system would fall.  And, we deal with that in two ways in our bill, and I think their bill will be very close.

First of all, we give the regulators the power to stop it.  Stop issuing credit default swaps.  Greatly increase your capital.  In other words, we want to stop people well before they get to the cliff.  If for some reason that doesn't work, and some institution does become so indebted that its failure to pay its debts would cause systemic problems, that institution is a balance.  There will be no more too big to fail.  If you get into trouble, you will fail.  As I've said, we will enact death penalties in the Congress, but they'll be for financial institutions that ought to be put to death.

There may be the need for the Federal Government to pay some of the debts if we give them the power to pick and choose.  The problem we had in 2008 was that as interpreted by the Bush Administration, Secretary Paulson, Fed Chairman Bernanke, Bush appointees-- they believe that if an institution failed and owes a lot of money in ways that would cause problems, they had to pay everybody or nobody.  They had no option.  And we say no.  The assumption should be pay nobody and if you have to pay to avoid terrible damages, you can do that selectively. And most importantly, the money won't come from the federal taxpayer.  It will come from fees raised by the financial institutions themselves.

AIG is the most egregious example of a federal intervention where we probably won't get the money back.  It was a Bush Administration decision without any Congressional input.  Chairman Bernanke and Secretary Paulson came to us in September of 2008 and said, "We have decided to use powers that the Federal Reserve has-- to use money they control to bail out the people who AIG owed money to."  We curtailed that.  In the future, the Federal Reserve, if our bill's passed, will not have the power to go in and make payments to a particular company.

An addiction, and this is very important, we have created a Consumer Protection Agency.  Right now consumer protection is done almost as an afterthought, frankly, by the bank regulators.  The Federal Reserve is the largest holder of consumer statutory powers, consumer regulatory powers.  They don't focus on that.  Alan Greenspan, in particular, didn't believe in it as a philosophy.  He thought the market would take care of everything.  To his credit, he's admitted that was wrong.  We create a separate Consumer Financial Protection Agency.  The banks are finding that hard and that's one of the major things that Senator Dodd is trying to save over there in the Senate.

I should add we also have a very important provision involving what's called securitization.  Thirty years ago, if you borrowed money, the person who lent you the money was the person you were going to pay back. And if I'm going to lend you money and you're going to pay me back, I'm going to be careful about the person I lend to.  Then came securitization whereby people lend money and then sell the right to be paid back and not surprisingly, they're not as careful.  We are requiring the regulators to say that if you do that and you sell the loan, you have to retain five percent of it and you get the first five percent of loss. And if it's a risky loan, you've got to keep 10 percent of it.  That may not seem huge but if you look at the percentage of the profit that represents, it's significant.

We also say if you're making a very safe conventional loan, a 30-year fixed interest rate mortgage with a significant down payment-- in that case the regulators could allow, if they think it's very safe, to hold none of it.  But we think that will be very helpful.

And finally I should say we give the regulators the power to break up institutions.  Congress repealed, I voted no, the Glass-Steagall Act 10 years ago.  It allowed banks to become conglomerates.  I don't think you can now retroactively order them all to be broken up.  That would cause more chaos in a weak time in the economy, but we are saying to the regulators, "If you see a particular institution that's getting into trouble or it's too over-extended, you can order them to sell this piece or sell that piece, and you can order them to reduce in size."  That's the essential package.

Oh, one last point.  We are specifically banning the kind of sub-prime mortgages, irresponsible mortgages, mortgages given to people who shouldn't have gotten them, who couldn't afford them, who had interest rate triggers that were going to go way up.  We simply make those illegal.