Sir John Eliot Gardiner CBE FKC is an English conductor and the author of Bach: Music in the Castle of Heaven.
Go to Profile 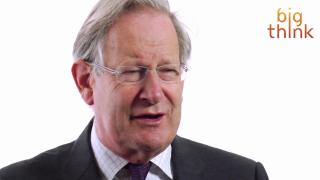 Despite the misgivings of the clergy, Bach’s church cantatas and Passions are full of drama, internalizing and dramatizing “the situation of the individual believer, spectator or hearer.”

John Eliot Gardiner:  One of the curious things that you soon have to come to terms with when you look at the life of Bach is that he never wrote an opera – and that’s a big conundrum. Why didn’t he write an opera?  Opera was the passport to success.  It was the means of earning a good living.  It was the really favored genre of the day to make your name in the world.  And yet he went away from it.  I mean was it because he never really heard any opera?  That can’t be the case.  There were several opportunities in his life when he could have heard opera.  Starting from the time when he was an adolescent living in Luneburg not so very far south of Hamburg where there was a flourishing opera house and Handel and Mattheson all performed there.

And Telemann later but was very much involved in it.  Was it because he had an allergy towards opera because he thought it was somehow uninteresting as a genre.  I mean he talked sometimes disparagingly about those little ditties that they go on performed at the Dresden opera when he says shall we go and hear them to his eldest son.  I don’t think it’s anything to do with that.  I think it’s to do with something much more profound which is that opera by then – I’m talking about the early 1720s, 1730s had already, if you like, taken a wrong turning.  When you think of how fantastically innovative opera was at its inception back in the 1600s with people like Monteverdi, **** where it was a type of through composed utterance in musical terms, natural speech rhythms and also closed form dance and the basics of what later became an aria.  By the time you get to 1700 just a century later it’s already started to fall into two different categories.  You have all the action packed into recitative.

Recitative being very fast paced, patter rhythms that tell you the story, the narrative.  And then moments of reflection and emotional response to the action in the form of arias, usually da capo arias in the sense that you start with an A section, it goes onto a B section and then you go back to the A section.  I’m feeling sad but my heart is grieving.  I feel still sadder and so on.  I think that Bach, although he took quite a lot of those conventions and turned them on their head, felt that there was something much more profound to be expressed through a different form which we might call mutant opera.  It’s as though opera has jumped tracks as it were and it becomes a kind of music drama that doesn’t require the stage.  It doesn’t require makeup.  It doesn’t require wigs.  It doesn’t require spears and costumes and swords.  It simply requires the musicians to deliver in a very, very dramatic but not theatrical way.

And there’s something of the fear that was really inculcated, I think, in the clergy of Bach’s day in that they said they didn’t want him to compose music that was in any way operatic or theatrical.  And that was the first thing that he – the first rule that he broke because his passions and his cantatas are full of drama.  Drama in the sense of dialectic – of conversations going on between characters, between two voices, between several voices, between an instrument or several instruments and a voice.  Almost as though the aria sung by an individual is being echoed or anticipated or contradicted even by – whether it’s a violin or an oboe or a flute.  So that there’s this element of dialogue constantly – a constant thread all the way through Bach’s writing which I think we find is the entry point for a composer like Mozart later on who picked up a lot of this dramatic mutant operatic thread that Bach so beautifully expressed.

Kirk Johnson: Evolution is Not an Obvious or Intuitive Concept