Kirk Johnson is the Sant Director of the National Museum of Natural History. He oversees more than 460 employees, an annual federal budget of $68 million (museum’s federal budget in[…]
Go to Profile 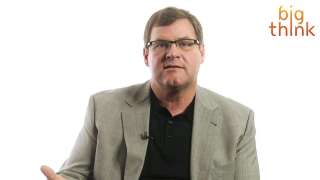 Kirk Johnson: Evolution is Not an Obvious or Intuitive Concept

It was an amazing discovery that we’re all related, but it was not obvious. It’s not obvious that I’m related to a strawberry, but I am.

Kirk Johnson:  One of the things that museums have been on the vanguard for for the last hundred years is the discussion, the public discussion of evolution and specifically the evolution of humans.  And for literally since Darwin’s time that was one of the great discoveries was that humans actually are descendants from other forms of animals and we are part of the tree of life.

I think it’s really important that people do understand that evolution is what makes biology makes sense.  That’s what makes all life make sense.  So from the museum point of view it’s always been a very important thing to show the actual evidence for evolution.  So if you want to have a rational conversation about evolution and creationism – and I have had many rational conversations with creationists who often feel that they haven’t seen the evidence for evolution.

And museums again are the most accessible portal for understanding science that we have.  And museums by presenting dinosaur skeletons and exhibits about human evolution frame the evidence that we have, the three-dimensional evidence that we have for evolution.  And I found that to be the most powerful way is to walk through an exhibit and say here are the elements of evolution manifest.  Because frankly evolution is not an obvious or intuitive concept.  It was an amazing discovery that we’re all related but it was not obvious.  It’s not obvious that I’m related to a strawberry.  But that’s the story of evolution.