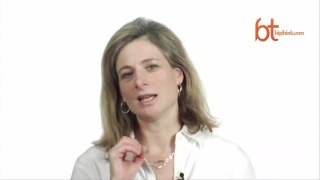 The Harvard physicist describes one of her most surprising moments of discovery.

Question: What was the greatest “Eureka!” moment in your career?

Lisa Randall: I mean, for any problem you work on there’s some moment where there’s sort of maybe it’s a moment where no one else cares about, where it all fits together and I found some simple way of doing something.  There are also the models that people have heard about such as the models about extra dimensions, something else that we did having to do with a different way of communicating supersymmetry breaking.  There were a lot of eureka moments in that and making it work out and the fact that we could all tie it together.  So, it’s hard for me to pull those out because a lot of the time when you’re working on something there’s that one thing that you get excited about.

Question: Have you ever been completely surprised by the result of an experiment?

Lisa Randall: I think one thing that surprised us, Braman and I, when we were working together was this existence, or the possibility of the existence, of an infinite extra dimension.  People had actually thought there were theorems that you couldn’t have an infinite extra dimension, that gravity would just look wrong, that there was no consistent way to do it.  And it was really interesting because we came across this by really following the consequence of our equations to the end and there was just no mistaking that it was allowing the possibility of an infinite extra dimension.  And it was interesting to go back and see what assumptions have been made that made us think, or made other people think that it was impossible, and just to see how the theory was almost smarter than we were and worked it out.  That was kind of fun.

Will We Find New Dimensions?