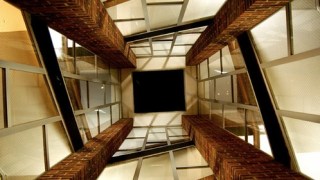 Will We Find New Dimensions?

The Large Hadron Collider in Switzerland will test some of physicists’ most radical conjectures, from supersymmetry to extra dimensions of space.

Question: What might the LHC tell us about the existence of extra dimensions of space?

Lisa Randall: The LHC will hopefully find the Higgs Particle; it hopefully will answer the question about the weakness of gravity and why there are different mass scales in the universe.  What the answer will be, we don’t know, although we’ve conjectured what it might be.  One of the possibilities that I and others have worked on is the idea that there could be extra dimensions of space other than the ones we see the forward, backward, left, right, up, down.  There could be other dimensions and they could be connected to explaining some of these features that we can’t otherwise understand.  We don’t know that that’s right.  Other people conjecture, in fact I’ve worked on it too, the idea that it might be something called supersymmetry, which have doubled the amount of particles in the universe, but again has some chance of explaining why there could be this huge hierarchy of mass scales.

So there could be various possibilities that we conjecture.  I don’t think anyone feels 100% confident, probably there are some people that do, but we really don’t know what’s there.  That’s why we do experiments.  All these theories have good aspects and bad aspects and so until we actually see how the universe works, sometimes the universe is far more clever than anything we think of.  So these were all possibilities, there’s some finer probability for all of them.  And we certainly want to make sure that the machine will test these ideas that it is capable so we’ve made the right – we tell them what the predictions are, what they should be looking for.

One thing to keep in mind is the experiments at the Large Hadron Collider are very difficult because they are very messy.  There’s many billion events per second and you’ve got to narrow that down and be able to look at the small things that the small predictions have a small probability of what could happen and be able to pull those out.  So, you have to have a very clear idea of what it is that you are looking for.  And that’s why we want to make models and tell them what they should be looking for.  What are the unique features that will identify something that’s new and can tell us what’s really going on at these energy scales?

Question: What is supersymmetry?

Lisa Randall: Well the term – to really understand supersymmetry requires you to know something about quantum mechanics.  Supersymmetry connects together different kinds of particles known as bosons and fermions.  Bosons are particles that like to be in the same place, fermions are particles that don’t like to be in the same place.  And the conjecture is, supersymmetry is that for every particle that we know about is a partner that’s the opposite in the sense that if the Higgs boson is a boson there will be a Higgs Zeno, a partner that’s a fermion.  If there are Gath Bosons there are Gath Genos, if there are fermions, there are partnered bosons.  So it sort of doubles the number of particles which, if you think about it from the point of view of what you’ve seen experimented, is quite dramatic.  If supersymmetry is right and explains what we call weak scale phenomena, this questions about masses and about the hierarchy problem, then we’d be able to see a whole school of new particles when the LHC is running at full capacity.

Dark Energy Will Take Over