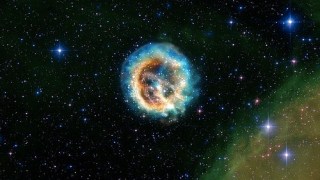 Dark Energy Will Take Over

Because dark energy doesn’t dilute as the universe expands, it will ultimately speed up that expansion exponentially, turning the cosmos into a giant void.

Question: What is dark energy?

Lisa Randall: There are various cosmological measurements, that’s to say, by studying how things have evolved in looking out at what’s out there in the sky, we can determine what type of matter it out there. It turns out that the kind of matter we see is only about 5% of the universe.  That is to say, stuff made up of protons and neutrons, the kinds of stuff we’re made of.  It seems only to be about 5% of the energy.  Then another 25% seems to be something called dark matter, which is matter that’s just like matter in the sense that it clumps together.  If we look at galaxies, there’s lots of dark matter.  But it doesn’t interact with light in the same way that the matter we know about does, which is why it’s dark and it’s hard to see, where I mean literally mean see with light.  So, we know it’s there because the gravitational effect.  And there’s various ways we’ve seen those gravitational effects, and there’s various ways we’ve seen those gravitational effects, but we don’t yet know exactly what it is.

In addition to that, more recently we became aware of the fact that most of the energy density in the universe consists of something that’s become known as dark energy.  So that is very different than dark matter.  Dark energy is just energy that permeates the universe, it’s not associated with any particular type of particle, any type of matter, it’s just out there.  So if there was nothing, no particles around, there could still be this kind of energy.  And in addition to that, that energy doesn’t clump and it doesn’t dilute as the universe expands.  So it’s a very special type of energy that Einstein first thought could be around.  It turns out it was there in the amount that Einstein thought, but there seems to be this amount, this residual dark energy that’s left that seems to dominate the energy density of the universe today.

Question: How did the universe evolve to where it is today?

Lisa Randall: We have a pretty good idea of how the universe has evolved to today and remarkably, in the last however many years, we’ve really been able to test the evolution of the universe, the cosmology model we have in much greater detail then we have ever had before.  So it’s really made cosmology into a precision science in a way that it hadn’t been earlier on in this century.

So there are really good tests of the Big Bang Theory and this theory of expansion.  The thing is, it doesn’t tell us about the early stages.  And particularly, there was some mysterious features when we looked at this background radiation, and I’m using “we” very loosely, the other people when they looked out at the sky.  And it was seen that radiation was very uniform and was homogeneous and isotropic, it looked the same in all different directions in the sky to a very, very high degree of precision; like one out of ten thousand with very small temperature deviations as you looked out at the sky.  Which was very surprising because there were pieces of the sky that didn’t even have enough time, according to the standard Big Bang Theory, to talk to each other.  They’re so far away that light could not travel between them in enough time.  So, some how all these different regions of the sky had to have originated in some common place.  And the theory of cosmological inflation combined together with Big Bang Theory seems to be what really works.

And what’s really remarkable is that there’s sort of an imprint of this state of exponential expansion in the sky.  If you look at details at the cosmic microwave background, it’s very much in agreement with the predictions of cosmological prediction.  So it really does seem like this happened and it explains some features; explains the flatness of the universe, the fact that the universe doesn’t – we can talk about the geometry of it, even the three-dimensional spatial universe and it seems extremely flat.  And again, that’s because if you think about a balloon, if you blow it up, if you blow it up enough even though we know over a large scale, it looks sort of round or spherical or oval, if you look at a small region, it looks very flat.  So, if you blow up a balloon enough at any given region, it looks flat, and the same way maybe we blew up the universe enough that it looks large and flat.  So, inflation seems to explain many features of the initial conditions of how things started before this Big Bang Theory took over.

Question: What does this research into the universe’s early history tell us about its ultimate fate?

Lisa Randall: Well, what really tells us about the ultimate fate of the universe is what we see today.  What we see today seems to be this dark energy that dominates.  And as I said earlier, dark energy doesn’t dilute as the universe expands.  Radiation dilutes, matter dilutes, so although we know right now we have about 30% matter if we include dark matter and our matter.  That matter, as the universe grows, that matter will become more and more dilute.  And dark energy is going to just take over at which point we will again have exponential expansion of the universe.  At that point, we will cease to have matter creation in the way we do today; star formation in the way we do.  Eventually we might have all the matter in black holes, but those black holes will radiate away.  So we will ultimately have, if this is right, a large essentially empty universe that will just keep growing.

Question: When do you predict this will happen?

Lisa Randall: This is not going to be the dominant thing that affects any of our lives.  This is a projection based on what we observe today of what would happen billions of years from now.