Continuing the countdown, Big Think's seventh most popular video of 2019 explains why universal basic income will hurt the 99%, and make the 1% even richer.

Douglas Rushkoff is the host of the Team Human podcast and a professor of digital economics at CUNY/Queens. He is also the author of a dozen bestselling books on media, technology, and culture, including, Present Shock, Program or Be Programmed, Media Virus, and Team Human, the last of which is his latest work.

DOUGLAS RUSHKOFF: For a long time I was a fan of universal basic income. And the logic I had was that I always hear politicians talking about, 'Let's create jobs for people. That's what we need is jobs, more jobs,' as if that's what's going to solve the economic problem. So the government is supposed to lend money to a bank, who can then lend money to a corporation, who will then build a factory in order for people to have jobs. Do we really need more jobs? In California, they're tearing down houses as we speak, because the houses are in foreclosure, and they want to keep market values high. The US Department of Agriculture burns food every week in order to keep the prices of that food high, even though there's people who are starving and people who need homes. We can't just let people have those homes. Why? Because they don't have jobs. So now we're supposed to create jobs for people to make useless stuff for other people to buy plastic crap that we're going to throw away or stick in storage units or end up in landfill just so those people can have jobs so that we can justify letting them participate in the abundance. And that's kind of ass backwards.

So I thought, well, shoot, rather than creating useless jobs, what if we just let people have the stuff that's in abundance? Just let people have the houses. What's the problem with this? And UBI kind of goes along that lines of, well, if we have more than enough stuff, if we don't need everybody working all the time, then why don't we just let people have income? Or at least go to a four-day workweek or a three-day workweek or a two-day workweek. If work is the thing that's scarce, then why don't we mete that out and say, 'OK, we've got these 10 days that you're allowed to work this year. So come on, come onto the farm and do that work, and then you'll have to find something else for you to do the rest of the time.' But in reality, it's not like that. If we were really that efficient, then we wouldn't be destroying the planet with pollution. What we've done is found ways of making stuff and doing things that require very little labor, but externalize a host of other problems to a whole lot of other places. So we could 3D print or something, but where do you get the plastic goop for your 3D printer? What mine in Africa is it coming out of, and which topsoil is it destroying? You know, when we're going to run out of topsoil in 60 years, it means that we're not actually using the appropriate labor intensive permaculture solutions in agriculture and all that. So first off, that whole idea that we're moving towards lower employment is a myth. We've faked lower employment through extremely extractive, exploitative, polluting, and unsustainable business practices.

And second, I was giving a talk at Uber, and I was talking to them about the problems with their business model and how they're putting all these drivers out of work. And here they are, these freelancers working for the company, basically training the algorithms that will be replacing them without any profit participation in the end-game company. And one of the guys got up and basically quoted back to me a passage from my own book, "Throwing Rocks at the Google Bus" he said, well, what about universal basic income? And when I heard it coming out of their mouths, I realized, 'Oh.' So universal basic income isn't just a way to help people have the money they need to survive and have time to innovate and come up with other solutions. It's becoming an excuse for companies like Uber to not pay a living wage to their workers. So what's the idea? Oh, we'll get the government to print more money to give it to workers for them to spend with us. So what really happens what is universal basic income? It's just a way of perpetuating our roles as consumers at the bottom of the pyramid, not as owners. If we're going to go to anything, I would say, what about universal basic assets? What about actual participation? What if the workers owned the means of production? So you don't just give them a handout so that the money ends up in the same corporate coffers and going into the same shares. That's not the point. What universal basic income does, if you look at the whole model, is allows the people who own the lion's share of our world to own more and more of it. We just print more money, and more of it goes up to the top. That's not the way to get long-term equity. Sure, Social Security, welfare, the dole, all those things are fine for those in need. But it's not a great long-term economic strategy. It's really just a Band-Aid on extractive corporate capitalism. How do we get to extract more? We'll just print more cash for us to extract. 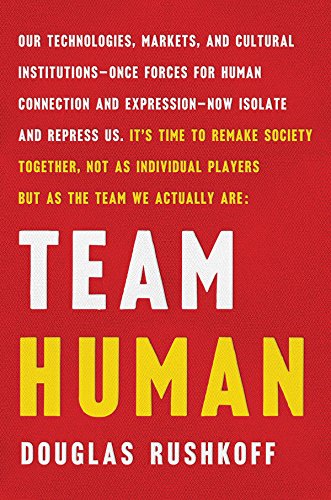