Life as a skeptic is summed up in this parody documentary

This parody documentary skewers both the skeptic and the superstitious, and accurately shows what issues skeptics face.
▸
with
Scotty Hendricks

Living as a skeptic in a superstitious world can be difficult. Luckily, the brilliant minds at QED 2018, a conference for skeptics, created the five-minute masterpiece The Migration of the Skepticto give us a laugh and a good look at some of the issues facing people who look at the world without superstitious mindsets. It even has voice actor Adam Diggle doing a spot-on impression of Sir David Attenborough’s narration style.

Did you catch that?

The “bell ends” shown at the start of the video include Dr. Oz, who is so fond of pseudoscience that he won the Pigasus Award for pseudoscience three times. Despite having a fine record as a surgeon, he likes to promote unscientific health practices, such as miracle cures involving coffee beans and reiki, all the while acting like a single scientific truth cannot be found. 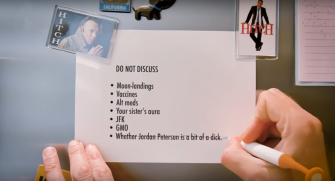 Jordan Peterson and your sister’s aura

One of the things that the mixed-faith couple decides they agree on is if “Jordan Peterson is a bit of a dick.” Peterson, who has been interviewed by Big Think, is controversial for some of his views, such as asserting that women on the pill are “a new biological entity” or that it is hypocrisy to wear makeup and not want to be catcalled. He also isn’t above pseudoscience himself with his strange understanding of DNA, archaeology, or how people can quit smoking without being religious.

Both Jordan Peterson and Dr. Oz are very popular, but earn the ire of skeptics the world over for their statements. The chance to get a jab in at them couldn’t be passed up.

The magnets holding up the list the mixed-faith couple made feature both famous writer and religious skeptic Christopher Hitchens next to Will Smith as the romcom movie character Hitch, showing how very differently skeptics can interpret even a five letter word from the typical person.

Being a skeptic in a superstitious world

The video, jokingly, brings up some of the various issues that skeptics can face in everyday life. Most Americans don’t trust people who are skeptical about the existence of God and wouldn’t vote for them. Mixed faith couples and couples where one partner is a skeptic are increasingly common, presenting new challenges for everybody.

Showing that some people can still make fun of themselves, the video also points out how insufferable some skeptics can be as a result of having to deal with these things. It shows, accurately, how despite the existence of organizations for skeptics and those who take a scientific view of the world, most people who would be interested in them don’t bother to participate. This is a shame since such organizations can provide the community and social capital that religious organizations offer others.

By means of a funny video, the people at QED remind us that the world and the people in it aren’t quite as rational as we often think and that it can be challenging to live in it with a dedication to skepticism, rational inquiry, and an unending desire to tell other people they’re wrong. It might never become the sort of viral video that encourages people to re-evaluate how they see the world, but it is good for a laugh and a reminder not to take your rationalism too seriously.

A guide to DIY activism, from the creator of the Pussyhat