Can life have meaning without religion? The common sentiment, expressed by the religious, usually translates as, “How could anyone refute the notion that a rough approximation of the god I believe in exists?” Though oceans of theological disparities exist between religious factions, many rely on doctrine to derive meaning from existence.

Is it actually doctrine, or the community espousing it? Religion can certainly instill meaning into life. Yet “meaning” is widely dispersed. If you ever desire an intentional bout of induced dizziness, glance over the list of Christian denominations—then recall that this is only one religion, with numerous others (also with numerous factions) contributing their own definitions.

To be fair, a handful of common definitions transcend denomination. Perhaps the most often expressed: “something greater than myself.” Sadly, this platitude is effectively meaningless, hardly a strong candidate for a consummate definition of meaning. A tornado is certainly greater than me; it can strip my life of meaning should it rob me of my home. Then again, I can rebuild. Meaning can be found in objects, yet often we define it as an inner state.

Instead of big definitions, let’s look at a specific example—not so much a synonym, but how meaning plays out in life.

Halima Aden was born in a Kenyan refuge camp in 1997. The Somali Muslim moved to America at age six. Three years ago, she garnered attention for competing in the Miss Minnesota pageant donning a burkini and hijab. Though she walked away without the trophy, she did make the semifinals while infiltrating the media. Flipping conventional American beauty standards over, she said,

“Not seeing women that look like you in media in general and especially in beauty competitions sends the message that you’re not beautiful or you have to change the way you look to be considered beautiful, and that’s not true.”

Aden recently reemerged in the spotlight for posing in this year’s Sports Illustrated swimsuit edition. During the shoot, she discussed her incredible journey back to her homeland.

“I keep thinking [back] to six-year-old me who, in this same country, was in a refugee camp. So to grow up to live the American dream [and] to come back to Kenya and shoot for SI in the most beautiful parts of Kenya—I don’t think that’s a story that anybody could make up.”

Aden then discusses unfair beauty standards placed on women and the notion of self-worth. She champions American values, such as the ability for a refugee, in the face of some of the harshest circumstances imaginable, to become successful while remaining proud of her heritage. Aden found meaning in life when the odds were stacked against her. It is a profound and inspiring story.

Then I made the mistake of sharing the article on social media.

You can also scroll through the comments on her Instagram feed, though you can likely guess what’s being expressed. Islamists deride her for lack of modesty—even covered head to ankle she’s still showing curves, which is apparently a problem. SI is supposed to be about fitness, says another: they need to loosen up and reveal more of her skin. A woman cries that America is going to hell by allowing such a travesty to occur; Sharia law will soon be installed here, etc.

This is not a pass for the blatant oppression of women in many sects of Islam (or anywhere). But the binary seems to be problematic for the religious. You can be against systemic intolerance and oppression and cheer women that flip the script by being empowered by the symbolism of their culture. In America, secular Judaism is as (if not more) common than Orthodox factions, yet somehow Americans believe the same cannot be true of Islam. 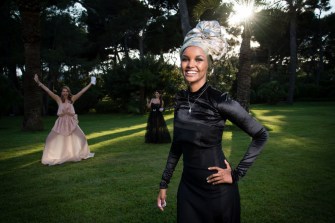 Halima Aden poses for portraits in front of Eniko Mihalik and Julia Restoin Roitfeld (back) at the amfAR Gala Cannes 2018 cocktail at Hotel du Cap-Eden-Roc on May 17, 2018 in Cap d’Antibes, France. (Photo by Pascal Le Segretain/amfAR/WireImage for amfAR)

To be seduced, then enraged, at what is normally expressed as the meaning of Islam is to ignore anyone that derives meaning from their culture on their own terms and not yours. One anecdotal observation: no one that negatively commented on my posts about Aden were Muslim women. The fact that she finds meaning in her presentation of herself does not pass the test of others who prefer their own definitions.

Aden might pimp major fashion brands on her feeds, yet she’s also an activist, supporting meaningful causes on a global scale. She was educated in that Kenyan refugee camp by UNICEF. The fact that she now represents the organization and gets to return the favor likely provides more meaning than a holiday photo shoot for Tiffany’s.

Is meaning derived from Islam or through helping the next generation of refugees? I can’t speak for Aden, but likely both. She writes about modesty in dress and childhood education; she reminds women that beauty is not defined narrowly. Feeling fulfilled from flat abs or a busty chest isn’t sustainable, given the transience of biological life; finding meaning in providing clean drinking water to children in a refugee camp can last a lifetime.

Extrapolate from there. Meaning is wherever we focus our attention. Religion doesn’t have a monopoly on the term even as it provides one fertile place for definitions. By the very nature of religions, however, any singular definition will be incomplete. The notion that one particular denomination nails it while those tens of thousands of others are off the mark is ludicrous, though it does speak to the tribal sentiments many factions promote among their ranks. So long as my tribe gets the spoils I’m fine spoiling it for you.

Or maybe there simply isn’t a meaning of life, but many meanings over many days that extend (hopefully) for many decades. Such a mindset seems more consistent with the evidence than discovering an elusive proverbial needle in an earth-sized haystack.

Scallop shells have accompanied pilgrims to and from Santiago de Compostela for centuries, for more than one reason
Thinking

Our inaugural special issue is focused on progress — the search for, the study of, and the project towards a better world.
Up Next
Hard Science

What could alternate, alien forms of life look like?

All life as we know it relies on carbon and water. But researchers speculate this doesn’t have to be the case.