All life on Earth, and thus, all life we’ve ever observed in the universe, shares a few basic characteristics. Its molecular structures are built using carbon, it relies on water to act as a solvent and facilitate chemical reactions, and it uses DNA or RNA as its blueprints.

These qualities seem so ubiquitous that most any compound we can find that contains carbon is called an organic compound. Carbon works very well as the basis for the chemistry of life. It can bond with many molecules, building structures large enough to be biologically relevant, and its bonds are strong and stable. Using water and DNA/RNA are also seemingly fine-tuned to enable life to exist.

But just because these properties of life are true on Earth doesn’t mean they are true everywhere. In fact, we can readily imagine different environments where alternative forms of life can exist. Here are some of the major ways we think that life can vary from the standard we see on Earth. 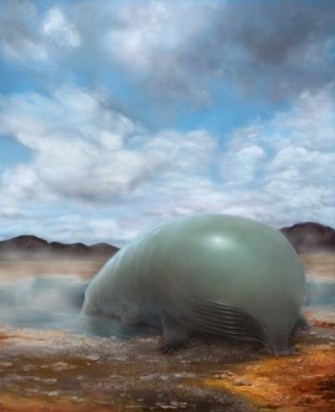 The same stuff that constitutes computer chips and electrical circuits may also constitute life somewhere in the universe. Carbon can form bonds with up to four other atoms at once, bind to oxygen, and form polymer chains, all of which make it ideal for the complex chemistry of life. Silicon, which lies just beneath carbon on the table of elements, also shares these characteristics.

Despite these qualities, silicon is still quite limited as a basis for life. It can only form stable bonds with a limited number of other elements; its polymers would be very monotonous, limiting its ability to form the complex compounds needed for life to occur; and silicon chemistry is not stable in aqueous, or watery, environments. Another issue is that when carbon oxidizes, it forms carbon dioxide, an easily expellable gas. When silicon oxidizes, it forms silicon dioxide, also known as silica, quartz, or sand. This solid waste would pose some serious mechanical challenges for any silicon-based life. Such a hypothetical lifeform would excrete bricks of sand every time it took a breath, which would make vacationing at the beach somewhat more horrifying.

Under certain conditions, silicon-based chemistry might be more favorable for life than carbon-based. Silicon chemistry would also be much more amenable to life in oceans of cold elements that we don’t usually associate with life, such as liquid nitrogen, methane, ethane, neon, and argon. Places like these exist in the universe, notably in our own solar system: One of the major features of Saturn’s largest moon, Titan, is its lakes of liquid ethane and methane. 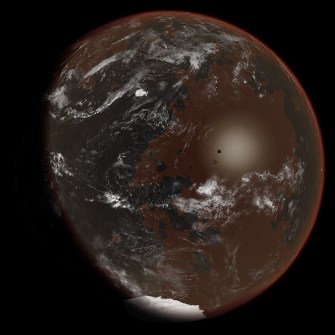 An artist’s depiction of a world with ammonia-based life.Ittiz [CC BY-SA 3.0]

Most of the chemical reactions that life relies on take place within a watery environment. Water dissolves many different molecules — it is a solvent, and having a good solvent is a prerequisite for the kind of chemistry that brings about life.

Like water, ammonia is also common throughout the galaxy. It’s also capable of dissolving organic compounds like water, and, unlike water, it can also dissolve some metallic ones, opening up the possibility for some more interesting chemistry to be used in living things.

However, ammonia is also flammable in the presence of oxygen; has much lower surface tension than water, making it difficult to hold prebiotic molecules together for very long; and its melting and boiling points are much lower than water, at –78°C and –33.15°C, respectively. Thus, the chemistry of ammonia-based life would occur much more slowly, and commensurately, its metabolism and evolution would also be slower. An important caveat, though, is that these are the melting and boiling points that occur at Earth’s atmospheric pressure. Under higher pressures, these values would rise.

One of the exciting features of ammonia-based life is that it could exist outside of the so-called habitability zone, or the range where liquid water can exist. Titan, for instance, may hold oceans of ammonia beneath its surface, and although it lies outside of our solar system’s habitable zone, it could for this reason host life. Astrobiologists often point to Titan as a possible site of alternative life forms within our own solar system.

Just as a person can be left-handed or right-handed, so too can organic molecules. These molecules are mirror images of one another, but life, for whatever reason, wound up using one side or the other, which is called chirality. Amino acids, for instance, are “left-handed,” while the sugars in RNA and DNA are “right-handed.” For these molecules to interact with one another, they have to be of the correct kind of chirality; if protein chains are made with mixed-chirality amino acids, they simply don’t work. But a protein chain constructed from right-handed amino acids, the opposite of what life on Earth uses, would work perfectly fine.

But alien life might evolve to use the opposite chirality as Earth. This life would be fundamentally quite similar to life on Earth — using carbon as its backbone and water as its solvent — but it would interact with us in one of two possible ways. First, it wouldn’t be able to interact at all. Even if microbial life tried eat some other microbial life, the “reverse” sugars would be indigestible, and viruses wouldn’t be able to bind to host cells. This would probably be a good thing, since we don’t want to be infected with any alien diseases.

But there are critters on Earth that don’t eat chiral nutrients, such as cyanobacteria. A comparable alien microbe would be able to eat as much as it wants, reproduce indefinitely, and would never be kept in check by predators since it itself would be of the wrong chirality. This would dramatically disrupt the food chain on an apocalyptic scale.

These alternative forms of life aren’t the only ones that exist, but they’re among the most likely. A lot of what we know about chemistry suggests that carbon- and water-based life will be the most common among the universe, but we’ve only ever had a sample of one to study: our own planet. If we find life on other worlds, we’ll gain even greater insight into how living things come about.

Tags
astrobiologybiologychemistrycosmosdnaenvironmentplanets
In this article
astrobiologybiologychemistrycosmosdnaenvironmentplanets
Related
Life
Strange life forms create an “alien” ecosystem in an abandoned uranium mine
Slimy biofilms made up of bacterial and eukaryotic life forms have taken over an abandoned, flooded uranium mine in Germany.
The Present
Climate change is altering the chemistry of wine
Smoke taint from wildfires is gross, even to wine amateurs.
Life
Our antidepressant drugs are affecting animals and ecosystems
A toxicologist explains the impacts of antidepressants on fish — and no, they’re not getting any happier.
The Past
How the death of alchemy gave birth to modern science
Far from practicing witchcraft, the experimentation of medieval alchemists helped bring about the Scientific Revolution.
Hard Science
200 years of exploring Antarctica
What we’ve learning from the world’s coldest, most forbidding, and most peaceful continent.
Up Next
Neuropsych
Why do people with depression like listening to sad music?
Research suggests that people with depression find sad music calming — or even uplifting.