Roman Krznaric is a public philosopher who writes about the power of ideas to change society. His latest book is The Good Ancestor: A Radical Prescription for Long-Term Thinking. His[…]
Go to Profile 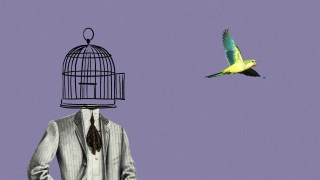 Our actions today are affecting future generations like at no point in human history. We need to learn to escape the tyranny of the present moment. If you think about the legacies we've inherited from the past, some of them are incredibly positive, like the cities that we now live in, or the medical discoveries that we still benefit from. But there are also a lot of negative legacies that we've inherited. For example, the inheritance of colonialism and slavery and racism. The inheritance of economies that are structurally addicted to endless growth in fossil fuels. So the great question facing humanity is, are we being good ancestors? In other words, are we gonna be remembered well by the generations to come? My name is Roman Krznaric. I'm a public philosopher and author of the book "The Good Ancestor: A Radical Prescription for Long-term Thinking."

Human kind is just an eye blink in the billion-year cosmic story. If you think about it, there are 7.7 billion people alive today. Now cast your mind back over the past 55,000 years. An estimated 100 billion people have been born and died. But both of these are far outweighed by the nearly 7 trillion people who will be born over the next 50,000 years, amongst them are your grandchildren and their grandchildren, the friends and communities on whom they'll depend. What obligations we have to those billions upon billions of people who far outnumber all those alive today. The scales are very much in their favor.

So I think if we're gonna be good ancestors we need to think more about the long term. But there is a struggle going on between the drivers of short-term and long-term. You know, do I party today, or save for my pension for tomorrow? Do I upgrade to the latest iPhone or plant a seed in the ground for posterity? And the part of our brain which drives our short-term behaviors, I call the marshmallow brain. It's part of our neuroanatomy which is all about immediate rewards and instant gratification. And it's named of course after the famous marshmallow test of the 1960s when a marshmallow was put in front of little kids and if they could resist eating it for 15 minutes, they will be rewarded with a second marshmallow. And it turned out the majority of kids couldn't resist and snatched the snack and gobbled it up. And it gave us this idea that we are wired for short-termism.

We also have inside us another part of the brain which I call the acorn brain. This is the part of our neuroanatomy which focuses on long-term thinking and planning and strategizing. It's what's enabled us to build the Great Wall of China, or voyage into space. So what's really happening is that there is a struggle going on between the marshmallow and the acorn and we need to find ways of switching on our acorn brain capacities, so we're not just marshmallow snatchers but long-term acorn thinkers.

So consider just doing this little exercise for a moment. What I'd like you to do is to just shut your eyes and imagine a child in your life who you really care about. It could be a nephew or niece, or your own child or grandchild. Just picture their face with your eyes closed. And now I'd like you to imagine them, still with your eyes shut, on their 90th birthday party. And now someone comes across to put a tiny baby into their arms. It's their first great grandchild. And now just open your eyes again, come back to the present moment.

You know, their future isn't science fiction. It's an intimate family fact, just a couple of steps away from your own. And that's just a little way of prompting ourselves to use our imaginative capacity to dance across time in our minds. But you can stand back also and recognize that being a good ancestor is for all of us. So some people who are interested in long-term thinking are really focused on issues of ecological justice and ecological degradation. Others are motivated by struggling against racial justice. Some people are worried about long-term mental health problems. Others are thinking about technology such as the threat from artificial intelligence or bio-weapons. So everyone has slightly different perspectives or issues that they care about, but put them together and they've got something in common, which is a recognition that we are far too dominated by the present tense.

And if any of you start thinking really long term, well, all of us really need the same things, whether you're living in the year 2021 or 2121. And what we need is air to breathe, water to drink. We need a sustainable planet to live on. So even though we don't know what exactly the future might look like, what we do know is that all of us will need a planet to live on. At the moment we're using on average 1.6 planet earths each year in terms of our ecological footprint. We need to take care of this one earth that will take care of our offspring. Nothing is inevitable in history until it happens. We have human agency, we can remake our world for a longer term future. We can jump off fossil fuels onto renewable economies. We can jump off myopic short term politics to politics that engages a longer now. We can shift our education systems to taking the long view into account. We must rebuild our imaginations of what a civilization could be.