Like many Angelenos, last week I spent a fair amount of time on the LAFD’s Twitter feed. As breaking information about regional wildfires was disseminated, I noticed a few comments pointing to some sort of conspiracy as the reason that so many fires were raging. Of course, numerous human-caused climate-oriented forces “conspire” in contribution to this growing problem, but that was not the implication.

Human beings are absurd creatures, a fact that the philosophical school of Absurdism addresses. The ideology represents the tension between our desire to apply meaning to a situation and living in a meaningless universe. The human brain, conspiracy theorist that it is, fills in gaps when explanations are lacking or simply invents them whole-cloth.

Two great Absurdist thinkers, Søren Kierkegaard and Albert Camus, devoted a lot of time contemplating the three responses to the tension that Absurdism spotlights, arriving at different conclusions as how to resolve it.

These are not the only thinkers to consider the absurd. One can argue that we are living through especially absurd times in America, with two alternate realities simultaneously presented as fact. Navigating this treacherous terrain has never been easy, but it proved especially difficult in times of social turmoil. The following 10 quotes consider this topic in greater detail.

Why life is meaningless, according to absurdists | BBC Ideas

Why life is meaningless, according to absurdists | BBC Ideas

The ultimate modern absurdist, English author Douglas Adams, kicked off his classic Hitchhiker’s series as a BBC radio show in 1978. While Adams left us too early at age 49 in 2001, the atheist and satirist knew how to drive into the heart of contradiction, as when he wrote in The Ultimate Hitchhiker’s Guide to the Galaxy,

“If there’s any real truth, it’s that the entire multidimensional infinity of the Universe is almost certainly being run by a bunch of maniacs.”

Somali-born activist Ayaan Hirsi Ali has gotten into her share of trouble for pointing out the contradictions in religious belief systems — namely, Islam, which she was raised in. She beautifully expresses the absurdity of existence in this passage from Infidel:

“The only position that leaves me with no cognitive dissonance is atheism. It is not a creed. Death is certain, replacing both the siren-song of Paradise and the dread of Hell. Life on this earth, with all its mystery and beauty and pain, is then to be lived far more intensely: we stumble and get up, we are sad, confident, insecure, feel loneliness and joy and love. There is nothing more; but I want nothing more.”

In Einstein’s Monsters, British novelist and screenwriter Martin Amis takes our love of war to task by noting the absurdity of our nuclear predicament.

The medieval scholar, Caroline Walker Bynum, knows well the contradictions of past ages. In Fragmentation and Redemption she takes note of the emotional utility of a belief in resurrection.

“If there is meaning to the history we tell and the corruption (both moral and physical) we suffer, surely it is in (as well as in spite of) fragmentation. Bodily resurrection at the end of time is, in a technical sense, a comic — that is, a contrived and brave — happy ending.”

The bible of Absurdist literature goes to the French philosopher, Albert Camus, who wrote one of the great philosophical texts of the 20th century with The Myth of Sisyphus and Other Essays.

“If I try to seize this self of which I feel sure, if I try to define and to summarize it, it is nothing but water slipping through my fingers. I can sketch one by one all the aspects it is able to assume, all those likewise that have been attributed to it, this upbringing, this origin, this ardor or these silences, this nobility or this vileness. But aspects cannot be added up. This very heart which is mine will forever remain indefinable to me. Between the certainty I have of my existence and the content I try to give to that assurance the gap will never be filled.” 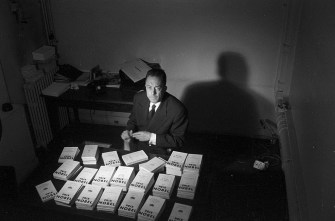 Albert Camus, seated, his books spread out before him on a table, with the banner ‘Nobel Prize.’

American professor and essayist Roxane Gay is one of today’s most lauded feminists, for good reason: her criticism shines light where darkness has too long pervaded. In Bad Feminist, she notes that judgment in the face of contradiction is itself absurd and should not distract from the bigger message.

“No matter what issues I have with feminism, I am a feminist. I cannot and will not deny the importance and absolute necessity of feminism. Like most people, I’m full of contradictions, but I also don’t want to be treated like shit for being a woman.”

Italian anti-fascist poet and anarchist Renzo Novatore had quite a way with words. The early 20th-century writer reminds us in I Am Also a Nihilist that the playing field will always be tilted and that finding your place on that field is essential.

“Life — for me — is neither good nor bad, neither a theory nor an idea. Life is a reality, and the reality of life is war. For one who is a born warrior, life is a fountain of joy, for others it is only a fountain of humiliation and sorrow.”

How can any list of contradictions and absurdity be complete without Belgian psychotherapist, Esther Perel? Mating in Captivity is necessary reading for anyone that wishes to be in any sort of relationship in the modern era. (Make sure to check out my 11 quotes from her as well.)

“Today, we turn to one person to provide what an entire village once did: a sense of grounding, meaning, and continuity. At the same time, we expect our committed relationships to be romantic as well as emotionally and sexually fulfilling. Is it any wonder that so many relationships crumble under the weight of it all?”

Few can put such a large sentiment in as few words as Jon Stewart.

“I have complete faith in the continued absurdity of whatever’s going on.”

I listed the quotes in alphabetical order by author name, yet it seems fitting to give the last word to the man that deserves it. Kurt Vonnegut is the king cynic and a brilliant writer that forces you to confront everything in existence. In Breakfast of Champions he sums up the Absurdity of our situation.

In Orwell’s dystopian novel, the government uses Newspeak to control thoughts by controlling language. But thoughts do not require language.
Up Next
Starts With A Bang

The lensed system shown here, discovered by the Dark Energy Survey and named DES J0408–5354, was originally thought to be one foreground source that quadruply-lensed a background object, creating four […]