The Ghost in the Machine: Unraveling the Mystery of Consciousness 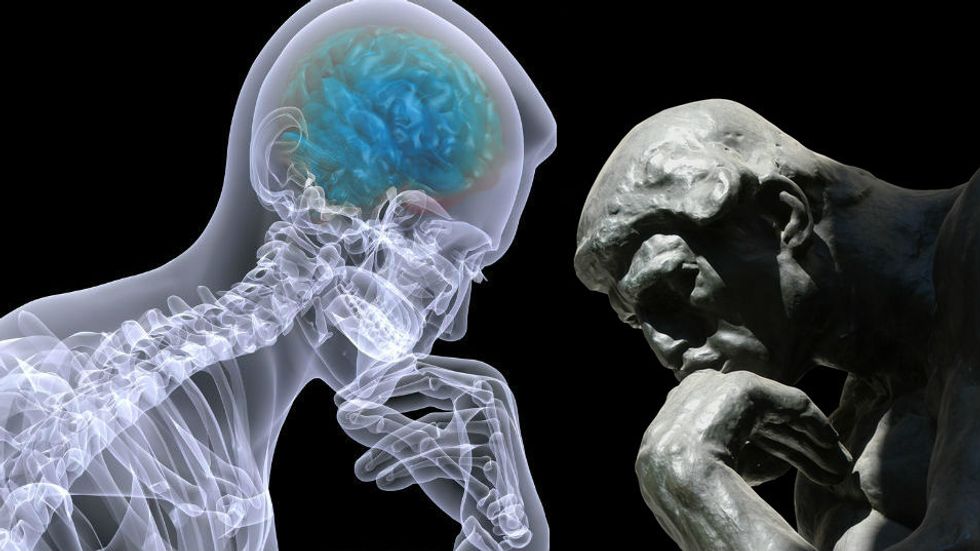 A funny thing happened with the invention of fMRI imaging. Rather than explaining away the mysteries of human experience, the technology that made it possible to visualize and map brain activity for the first time only further complicated our understanding of how the mind works.

Yes, we can say with an amazing degree of certainty which parts of the brain “light up” during specific events (falling in love, having an orgasm, dealing with money), but the theory that there’s a single area responsible for each of these complex experiences is as outdated as phrenology. Instead, neuroscientists see patterns and associations, correlations and links.

Satisfactory definitions of philosophically loaded concepts like perception and thought remain as elusive as they’ve always been. If physicists can find the “God particle” with a Hadron collider, then why, given their sophisticated tools, have neuroscientists failed to unlock the black box of consciousness?

Even with the ability to photograph the brain, “you don’t settle philosophical disputes lickety-split,” says Alva Noë. Noë is a philosopher and a member of the Institute for Cognitive and Brain Sciences. He argues that contemporary neuroscience is guided by a few assumptions, chief of which is that the world occurs inside our heads – that the brain makes the world. In this framework, experience is understood as a pattern of sensory stimulation perceived by our hands, feet, eyes, and ears.

The claim that we can come to know the world by breaking it down into smaller parts and observing how they work, then applying those principles to larger questions, is an epistemological perspective called reductionism. Reductionism informs the methodology of much modern biological research, and it's more problematic in practice than in theory. For instance, one of the primary debates about it is whether classical genetics can be reduced to molecular biology.

“Of course that’s a very old idea,” says Noë. “It’s almost as if each of us is a submariner in a submarine and we’re traveling around. There are no windows on the submarine. We know nothing about the world around us other than the data we pick up, and we try to construct some model of what’s going on outside, but we’re trapped inside. For most neuroscientists who think about consciousness, the assumption is that we’re trapped inside our heads.”

Our modern understanding of the mind-body problem owes much more to Descartes’ theory of dualism than we'd think. Descartes theorized that the body and mind were two entirely separate entities. Thought existed on an entirely different plane than the physical. "On the other hand, the contemporary scientists they say, 'No, it’s the brain that’s the thing inside of you that does all that, it’s not the soul, the immaterial spirit. The truth of the matter is we don’t have any better idea today how the brain accomplishes what the spirit was supposed to accomplish. Sorry. We don’t have a better idea today how the brain does that than Descartes had how immaterial soul stuff does that."

Contemporary neuroscience follows Descartes in conceptualizing consciousness as something that occurs internally. The difference is that for Descartes, the soul was the ghost in the machine, while for neuroscientists, the ghost is the machine. Neither paradigm manages to capture the texture and dimension of conscious experience, according to Noë.

Consider this; we are conscious of both more and less than affects our nervous system. Let me give you an example. I look at a tomato. It’s sitting there on the counter in front of me. It’s red and bulgy and three dimensional and I experience all that visually. I have a sense even visually of the back of the tomato, but I can't see the back of the tomato. It’s out of view and yet it’s part of my experience of the tomato that it has a back. It’s present in that sense to me, but note it doesn’t strike my retina. It’s present. It informs. It structures my visual experience without actually being an element that stimulates my nervous system.

More "shows up" for us or is present in our perception of the world than what is transmitted by the nervous system. What we experience depends on our past -- on what we know, what we've learned, how we've learned it.

This is an exciting time to be studying human nature, but not because of functional magnetic resonance imaging. It's the breakthroughs in our study of the brain that are interesting. "I want to underline that my own criticism of recent neuro-scientific approaches to consciousness is not a criticism of the scientific study of consciousness," Noë explains. "It’s urging that the science gets better and that it shed certain straight-jacketing individualistic, internalistic assumptions, assumptions that are really holding a general science of human nature back."

One of the striking developments of modern times is an appreciation of how unbounded things are. Social networks have transformed our understanding of the nature of the individual. Phones allow another person to be present to us even when they are miles away, destroying the illusion of boundaries.

I travel and I can access my latest work documents, my deepest, most intimate thoughts on the cloud, so where are my most deepest, most significant thoughts? Where am I working? Where am I located? We ourselves are distributed dynamically, extended beings who are always becoming through our action. That is a very profound, new way of thinking about what we are. But sadly so often in the sciences of mind, this new way of thinking about ourselves is overlooked as a possibility. Too many cognitive scientists, not all, but the majority tend to take really a 17th century conception of the person as an individual island trapped inside his or her head. We need to break free of that.

Now, the only way to move forward is through an integrated, contextualized neuroscience of consciousness.