This Is Your Brain During Orgasm 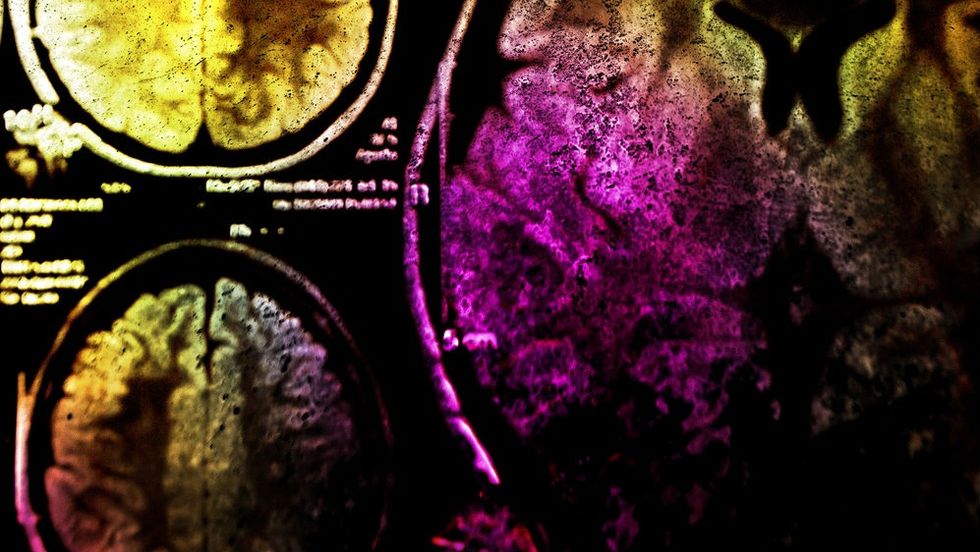 I was going through the same spiel over and over again. I knew the procedure backward and forward. Or so I thought. When I arrived at Rutgers University’s Smith Hall, a 1970s-style building in the middle of the Newark campus, I was in a bit of a panic. Despite spending an hour or two trying to concoct some kind of sexy fantasy about lab coats and confined spaces the previous night, I was afraid that when push came to shove, I would not be able to reach orgasm.

Getting to the Big O

A few hours later the party moved to the fMRI suite at the nearby University of Medicine and Dentistry of New Jersey Medical Center. I donned a hospital johnny and was pushed back into the scanner’s tube, as ready as I would ever be to have an orgasm in an fMRI. The magnet started to spin around me. As promised, it was loud. It lasted the majority of my session inside the scanner, which was approximately an hour and a half. Even with ear protection, I could feel each click, clank, and whir all the way down my spine.

Just as I was starting to zone out, not into sleep exactly, but into something like it, the noises suddenly stopped. It was now time for the big show. Ready or not, I had to woman up and bring myself to orgasm. In a few minutes I would know if loud clanks and clicks, hospital johnnies, and a tight mesh head restraint could make the magic happen.

Hearing my cue, I took a deep breath and got to it. It may not have been romantic or sexy in there and, man, this mask thing was starting to get really uncomfortable, but I was going to orgasm no matter what. I powered through it, keeping my head as still as possible. A few minutes later I raised my hand to let Komisaruk know my orgasm had begun. I wouldn’t say it was one of my best, but, hey, in my humble opinion, it still qualified.

I lowered my hand to signal my finish and, with it, let out a long breath of relief. If I could have reached around to pat myself on the back, I would have done so. I now had a great story if anyone ever asked me to name the strangest place I’ve ever had an orgasm. And I had helped science while doing it. Triumph for all parties concerned.

“An Orgasm Is a Whole Brain Experience.”

What happened in my brain during orgasm? Komisaruk and his colleagues saw distinct temporal activity, with different brain areas being recruited as I went from arousal to orgasm and then back around again to rest.

As I roughed up the suspect, so to speak, my genital sensory cortex, motor areas, hypothalamus, thalamus, and substantia nigra lit up. The hypothalamus was no surprise; it has consistently been implicated in all manner of reproductive behaviors, including arousal. The part of the brain that produces oxytocin, is located there too. My motor areas controlled my fingers as I self-stimulated, and my genital sensory cortex registered that stimulation. And the thalamus? It was integrating not only the activity of my wandering fingers but also the memories and fantasies I used to help build up my arousal. The substantia nigra, an area rich in dopamine-producing neurons, paired with the PVN’s oxytocin release, had me feeling nice and relaxed.

Areas implicated in memory, integration of sensory information, and emotion also became active. As my orgasm came to a close, the hypothalamus turned back on, and reward areas like the nucleus accumbens and caudate nucleus were flooded with dopamine. That was what gave me that final rush. Getting to that point involves a variety of cognitive, emotional, and sensory components—even when it’s just you doing the work.

Like every study, Komisaruk's research raises more questions than it answers. Researchers still hope to understand:

As Komisaruk told Sukel: “I can envision a time when people can regulate their own brain chemistry through some kind of internal process. But we’re still in the infancy. Hell, we’re still in the prenatal in this field. But I can’t wait to see what will come in the next ten years. It’s going to be amazing.”