Diamond Dallas Page: How I Overcame My Learning Disabilities

The former wrestler shares how he was basically illiterate at age 30, a sufferer of dyslexia. It was an untamed drive to learn (and a little help from Lee Iacocca) that helped him overcome this disability. 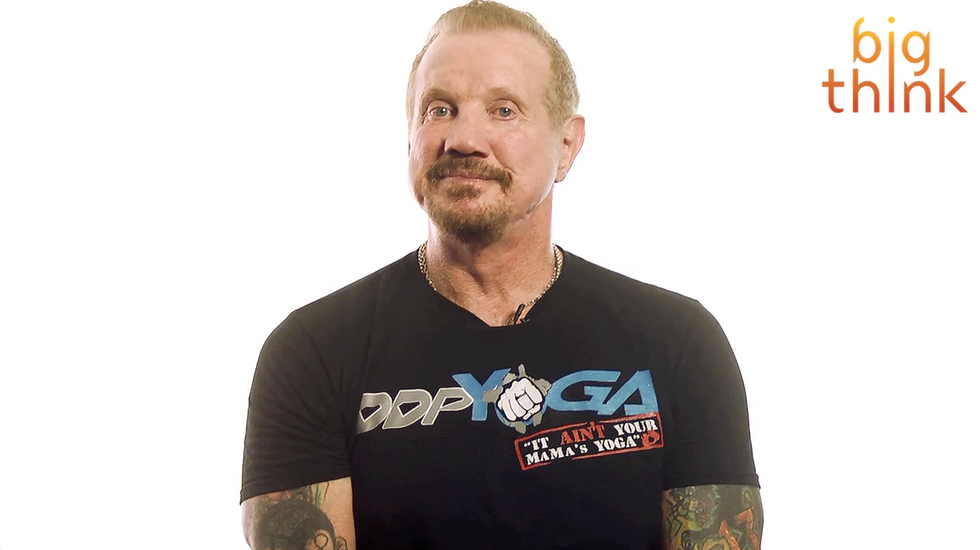 Retired professional wrestler Diamond Dallas Page has seen a lot of success both in the ring and out of it. A three-time World Heavyweight Champion, Page was one of the WCW's biggest stars during its mid-to-late 1990s heydey. Since then, he's become an accomplished actor, fitness instructor, entrepreneur, and motivational speaker. He is the founder of DDP Yoga and author of the book Yoga For Regular Guys. Becoming an author is probably one of DDP's greatest accomplishments considering the fact that he was borderline illiterate up until his 30s.

Page explained in his recent Big Think interview how hard work and tenacity helped him overcome dyslexia and ADD during a time when those disorders weren't as widely understood:

Before he was handing out Diamond Cutters in the squared circle, Diamond Dallas Page was a 31-year-old nightclub manager in Fort Myers, FL. He was also only able to read at a third-grade level in large part due to his learning disabilities. Page, embarrassed by this shortcoming, made a set decision to do something about it. He decided he was going to a read book. A big book. And he was going to read it cover to cover:

"Now that may not seem like that big a deal to most of the people watching me talk right now but to me at that point in my life it was fucking overwhelming."

The book Page chose for his daunting task was Lee Iacocca's first autobiography, a 352-page volume detailing the automobile magnate's career with Ford and Chrysler. Page approached the project with the same steadfast determination he reserves for achieving all his goals. He was going to be tenacious. He was not going to give up. And after a year, his perseverance finally paid off:

"I was going to read one page from that book every day. And I just didn’t think it, I inked it and I put it everywhere. Once I made that decision I was like 'I’m going to do this.' I put 'read today' and I stuck it on my bathroom mirror. I stuck it on my nightstand, my headboard, my refrigerator, my car. It was everywhere. I was in the nightclub business back then so I didn’t always read right before I went to bed because I knew I might be out raising hell that night. But before that day was over, before I headed out to the club I was going to get one page from that book in. And it took me a year but I read that fucker from one end to the other."

When recalling his favorite story from the the Iacocca book, Page prefaces with a little bit about how wrestlers see the world a little different from everyone else. Pro wrestling is built around a code known as "kayfabe," which necessitates that the illusion of genuine competition and portrayal of events as unscripted never be broken. After operating under this code for so long, wrestlers begin to see the entire world as "a work," or set up. Everything has a logic to it; spectacles are but the residue of design. Page calls pro wrestling the original reality TV, which is apt in the sense that shows like Duck Dynasty present a scripted form of reality. It's all a work to Diamond Dallas Page.

So Page's favorite part of Iacocca's book is a story involving the original Ford Mustang, introduced in 1964:

"[The Mustang was] the biggest sensation in the auto industry at that time. And they only made a few of them. They didn’t make like bazillions of them. They made [only] so many of them. And on the day that the Mustang was in the showroom, a guy in a tractor trailer saw the car, couldn’t take his eyes off the car, went right through the light, crash[ed], went right through a building, destroyed everything. He, of course, walked away and no one was injured. That means that was a work."

Ever skeptical, Page loves the thought that the 18-wheeler plowing into the side of a building was just a set up. He calls it brilliant, the perfect spectacle to boost the car's legend. It's not altogether unlike how iconic matches against Goldberg, explosive video promos, self high fives, and the infamous Diamond Cutter helped contribute to the legend of Diamond Dallas Page.