Having a spy as a mother must be challenging, especially if she dumps you off with a strange cast of characters during your influential teenage years. One day you’re living with two parents when suddenly your father lands an overseas gig with Unilever; your mother is required to travel with him. The next, a shady man who ferries greyhounds across the channel to participate in dog fights is teaching you how to survive in the underbelly of the British economy. The familial dissolution fractures your relationship with your sister. When your mother returns you never regain that closeness, until one day she is murdered years after the war has passed.

Such an existence is foreign to nearly all of us. Yet the themes present—parental issues, friendship, social confusion, peer pressure, heartbreak—are universal. There are hundreds of volumes of historical nonfiction about World War II. Yet in Michael Ondaatje’s novel, Warlight, we shed the macrocosm to home in on how war uproots one family. Though widespread death and destruction is absent, what replaces it is an ability to empathize with the imagined characters.

As relevant as the study of history is, this ability to feel and share the emotions of others is arguably more important. A recent commenter on Reddit argues the reverse, citing Dan Carlin’s podcast, Hardcore History, as the catalyst for their intellectual transformation:

Listening to Dan Carlin’s podcasts with my 11 year old son is what sparked my interest and took history beyond the names and places I had previously memorized for passing grades. It awoke something in me and made me realize that I have little need for fiction with so many unread historical accounts still out there.

I’d never argue against Carlin. It takes a special thinker to narrate six hours on the Celtic Holocaust and leave listeners wanting more. It’s also important that more people study history, a fact Carlin has played no small role in promoting. He’s not the only one. In a recent episode of Sam Harris’ podcast Waking Up, historian Yuval Noah Harari argues that history is a framing of the present. Without knowing where we come from it is impossible to realize how we’ve arrived at where we are, a theme especially pertinent to Americans today.

But abandoning fiction for history? The two go hand-in-hand. Mythologies and epic poetry are predominantly fictional accounts influenced by historical events yet have shaped the way we interact as societies, war with one another, and communicate across political boundaries. History requires narrative; a disinterested recording of events has never occurred—most often we’re reading the stories of winners, in war and political might. Perception is relegated to the individual writing these events; what we perceive is colored by our experiences. There is no such thing as “pure” history.

As Pakistani novelist Mohsin Hamid points out, The Protocols of the Elders of Zion, a text as “real” as Joseph Smith’s golden tablets (yet presented as nonfiction), “stoked the fires of European anti-Semitism in the decades before the Holocaust.” Uncle Tom’s Cabin helped lead to abolition; Things Fall Apart opened many eyes to the tragedies of colonialism; The Jungle led to the Meat Inspection Act. I’m not sure anyone has tracked references of 1984 in the last decade, but it’s certainly a more robust number than the years following its publication.

Fiction, Hamid continues, allows us to say what we otherwise would not. While there are certainly men as brazen as Rabbit Angstrom, rarely do you find one so vocal with his inside voice, as if the filter from cortex to mouth was severed. The tenderness an abused mother shares with the son she locks in the closet in Emma Donoghue’s Room—though I’ll never be a mother or closeted child, I found myself curled into a ball while reading the harrowing details.

Not that fiction need be painful. Wallace Stegner made me fall in love with states I’ve never set foot in. I’ve never sipped a cup of Happicuppa by name, but every time the term is invoked by Margaret Atwood an immediate aroma of grinding beans fills the air. Amitav Ghosh’s retelling of the Opium Wars pulled from me a romantic longing for an era and culture that can only be imagined. 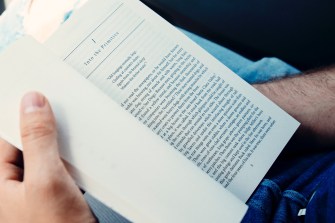 It is in our imagination that we solve the problems of the world. True, the same imagination creates these issues to begin with, so deeply embedded are our conjured fears. The hero’s journey is a series of illustrious tales of us righting the wrongs we cause in the first place. Perhaps that’s why redemption, a theme made famous by the world’s most circulated story of fiction, is so meaningful: we adore the sucker who transcends their folly.

“Fiction is the lie through which we tell the truth,” remarked Camus, the man who asked us to imagine Sisyphus happy with his fate. Such a mediation today would be the source of severe cognitive disassociation. In a culture obsessed with self the burden of such responsibility is rarely entertained. It’s hard to be absurd when you take yourself so seriously.

Yet this might hint at the most useful role of fiction in our age: a resurrection of the lost art of debate. The Stranger is effectively the story of a mind warring with itself. To wage a successful campaign, you must contemplate competing narratives with equal gravity before arriving at a decision. Nothing in contemporary society champions such an honest appraisal. To even think the other side has a point is heresy. Few histories capturing this moment will be free of deeply ingrained bias.

There is no escape in fiction, though it offers something we so desperately need: time. Stories require an investment, the type of sacrifice tweets and selfies are not equipped to offer. The arresting power of a beautiful sentence; the captivation characters evoke, especially messy ones. To travel well with another’s mind is a necessary form of communication. Without it, we lose our humanity, as blasts of puerile emotion shuttled through cyberspace in the form of reactionary fragments are teaching us.

We need history. Without it, we have no foundation for understanding today. But we need fiction as well. When we refuse to wrestle with our demons they always win. And America, despite what Twitter announces, is not tired of winning given how little of it we’re accomplishing. The fiction we’re living through has no elegance, no depth, nothing of the character of a good novel. We’re just growing tired.

Why read fiction? Because of the ‘Jihadi Sandbox Principle’

Eric Weinstein explains that if your mind isn’t running contradictory programs, you’re not thinking deeply enough. Fiction can help you imagine some of those dangerous and alien ideas, and learn from them.

The spikes in their mouths would have helped them catch squid or fish.
Up Next
Politics & Current Affairs

No black scientist has ever won a Nobel – that’s bad for science, and bad for society

Black scientists lack role models who look like them.