As Reza Aslan, author of “Zealot: The Life and Times of Jesus of Nazareth,” told Big Think in an interview: “This makes no sense to people, especially when you consider that Trump is not just the most irreligious president in modern history. His entire worldview makes a mockery of core Christian values like humility and empathy and care for the poor.” 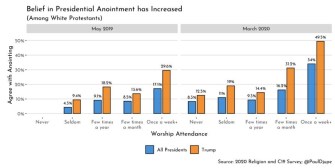 Two graphs showing how church attendance increases the likelihood that someone will believe all presidents (blue) or Trump (orange) were anointed by God. The graph on the left shows the survey’s 2019 results, the right its 2020 results.(Photo: Paul Djupe and Ryan Burge)

Paul Djupe and Ryan Burge, associate professors of political science at Denison University and Eastern Illinois University, respectively, noticed a spate of pastors, pundits, and politicians exclaiming Trump to be God’s chosen one. To pick one example, televangelist Pat Robertson has claimed that Trump received a mandate from God.

The two sociologists wanted to see if such beliefs were widespread among America’s Christians or just the hyperbolic musings of ratings-hungry talking heads. In May 2019, they surveyed just over 1,000 church-attending Protestants and asked them two questions: First, did they believe all presidents were anointed by God; Second, did they believe President Donald Trump was specifically anointed by God?

For example, among white Protestants who attended church less than once a month, only 9.4 percent agreed that Trump was anointed by God. But among white Protestants who attended church more than once a week, that number leaped to 29.6 percent. When Djupe and Burge looked specifically at Pentecostals, they found 53 percent connected Trump’s presidency with divine design.

Other surveys have shown similar results. A 2020 Pew Research Center survey asked Americans, not just church-attenders, about God’s role in recent presidential elections. They found that 32 percent of the more than 6,000 respondents, a sizable minority, believed Trump’s election must be part of God’s overall plan—though only 5 percent of those respondents believed God chose Trump because of his policies.

The survey found similar opinions regarding Obama’s election, suggesting a not insubstantial belief that God involves himself with American elections but remains fiercely nonpartisan. 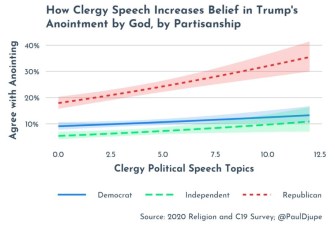 A graph showing how political speech from clergy correlates with increased belief that Trump was anointed by God. The correlation proved strongest among Republicans. (Photo: Paul Djupe and Ryan Burge)

Evangelicals believing God chose Trump may go some way in explaining their support of him, but it doesn’t relieve the perceived cognitive dissonance between Trump’s values and those of core Christianity.

In his interview, Reza Aslan argued Trumpism had become a cult for fundamentalists. For these fundamentalists, Trump became a warrior under the auspice of God to fight on behalf of evangelical beliefs. A “salvific character” to worship, as Aslan put it.

Bruge and Djupe don’t go so far as to call Trumpism a cult; However, their data back the idea that Trump’s rise can be linked to defensive circling against perceived threats and repeated messaging.

“We were quite surprised by the result that 49 percent of those frequently attending worship services believed that Trump was anointed by God to be president,” Bruge and Djupe told Fox News in an interview. “At least until we examined the evidence that suggested religious and secular elites continue to claim that Trump has a religiously significant role to play.”

The sociologists also asked their 2020 respondents whether they heard clergy mention political topics at the pulpit. They found a strong correlation between church attendance with political messaging and a belief in Trump’s anointment among Republicans (see the above graph). That correlation was not as strong among Democrats or Independents.

“We are not the first to note that right-wing media are having a profound effect on public opinion, serving to insulate Trump supporters,” Burge and Djupe write. “We are some of the first to document how this is built and sustained from the bottom up. That is, political churches, among Republicans especially, reinforce the argumentation that is also coming from above.”

They conclude, “But it is important to see that this is not just an evangelical Republican problem. The religious significance of the presidency is swelling across the board for the religious, indicating further polarization along religious and partisan lines is continuing.”

President Trump and faith leaders say a prayer during a signing of a national day of prayer for people affected by Hurricane Harvey.(Photo: Alex Wong/Getty Images)

As for Trump’s moral conduct, evangelicals don’t maintain the cognitive dissonance that Reza Aslan and other non-Trumpists perceive would be necessary. The same 2020 Pew Research Center survey found that white evangelicals were mixed on Trump’s personal conduct and moral qualities—with only 15 percent agreeing that the phrase “morally upstanding” described Trump well.

Where there is more agreement, however, is the belief that Trump’s administration is on the evangelical side of the culture war. Fifty-nine percent of white evangelical Christians believe that the Trump administration has helped their interests, and 63 percent say their side has been winning politically, which according to Pew is “triple the share who said this in May 2016, six months before Trump’s election.”

Rick Perry summed up this worldview last year when he told Fox News: “Barack Obama didn’t get to be the president of the United States without being ordained by God. Neither did Donald Trump.” He added that God has used “individuals who aren’t perfect all through history” such as King David and King Solomon.

In the evangelical mindset, support for Trump isn’t a moral inconsistency. They perceive the President’s moral character to be lacking in fiber, but still believe he was chosen to fight the good fight with the blessing of God’s will.

Whether that fight matches the will of the people, we’ll have to wait until November to find out.

Religious people report greater sexual satisfaction. What can we learn from them?

Only have sex with a person you love — a novel concept!
High Culture

Terrifying dragons have long been a part of many religions, and there is a reason for their appeal

Fire-breathing dragons may represent chaos and the human impulse to conquer that threat.
13.8

All humans are believers

Belief is not just about God or ghosts.
The Present

What is a fatwa? Explaining the attack on Salman Rushdie

The Arabic word fatwa can mean “explanation” or “clarification.”
Thinking