The first signs that Warren was inching ahead of Biden came from Iowa. On Sept. 21, a Des Moines Register/CNN/Mediacom Iowa Poll indicated Warren beat Biden by 2 percentage points, with 22 percent of likely Democratic voters saying she was their first choice, followed by Biden (20 percent) and Sen. Bernie Sanders (11 percent).

J. Ann Selzer, president of Selzer & Co., which conducted the poll, told the Des Moines Registerit was “the first major shakeup” in what had been a fairly steady race. “It’s the first time we’ve had someone other than Joe Biden at the top of the leaderboard,” she said.

A national poll from Quinnipiac University also revealed that Warren had a two-point lead over Biden, while a separate poll from Economist/YouGov showed Warren with a one-point lead over the former vice president.

“It now appears likely to boil down to a two-way contest, one in which Democrats will have to decide whether to go big or go home,” analyst Charlie Cook, founder of the bipartisan Cook Political Report, wrote this week. “In this case, going big is doing something bold, daring, and exciting but potentially risky — that is, going with Warren. Going home is to a more comfortable, familiar, but not terribly exciting place: Biden. Revolution versus restoration.”

Biden had long been considered the favorite to win the Democratic primaries. The former vice president was, for many Democrats, the safe bet, the electable candidate whose resume and political chops would likely be enough to unseat President Donald Trump — or, better yet, “beat him like a drum,” as Biden said earlier this month.

In some ways, Biden’s appeal is about what he won’t do: Lose to Trump in 2020 by alienating moderate voters. But this asset — Biden’s centrism and “return to normalcy” promise — might also be turning off more idealistic Democratic voters who want not only to beat Trump, but also to overhaul the system. What’s also not helping Biden, a reputed gaffe machine,” is his tendency to stumble during the Democratic debates, which has prompted critics on both sides of the aisle to question whether his age, 76, is a liability. 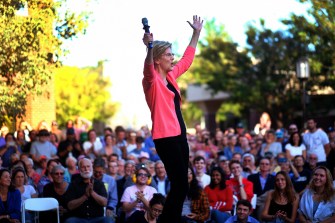 Meanwhile, Warren is offering the kind of “big, structural change” that many Democrats want, and she’s offering relatively detailed plans for how to bring about these changes, which include: increasing taxes for the richest individuals and corporations, cancelling student debt, making college free and childcare affordable, eliminating private prisons, reinstating the Glass-Steagall Act, raising the minimum wage to $15, abolishing the electoral college, among other proposals.

Compared to Biden, Warren’s supporters seem generally younger and more enthusiastic. You can see this difference at Warren’s rallies — at least one of which The New York Times likened to a rapturous church service — where hundreds of supporters often wait hours in line to take a selfie with the presidential candidate.

Warren also benefits from not having suffered as many recent attacks from Trump and his followers. In contrast, Biden and his son, Hunter, have become ensnared in a scandal in which Trump asked Ukrainian President Volodymyr Zelenskiy to “do us a favor” and investigate potential corruption on the part of the Bidens. As Trump faces an impeachment inquiry over this request, he’s repeatedly bashed Biden, tweeting multiple videos essentially accusing the former vice president of corruption, but offering no hard evidence. It’s possible that Trump wants to knock Biden out of the race because he considers the former vice president to be a stronger opponent than Warren.

On Oct. 15, The New York Times and CNN are scheduled to host the next Democratic presidential debate, which will include:

The questions about which massive structures to build, and where, are actually very hard to answer. Infrastructure is always about the future: It takes years to construct, and lasts for years beyond that.
Up Next
The Present

Could neo-paganism be the new ‘religion’ of America?

Witchcraft and pagan spiritualities are on the rise in the United States — especially within mainstream youth culture.