The witch is impossible to ignore. Pop into an Urban Outfitters and you’re sure to find an array of tarot card packs, a beginner’s guide to crystals, and a spell book or two. Over at Barnes and Noble, Arin Murphy-Hiscock’s book, The Green Witch (2017) is among many “witchy” books being marketed to young women. On Instagram, a popular #witchesofinstagram hashtag is now widely used, and the account @thehoodwitch has a following on the platform of 434,000 followers.

Although neo-pagan, or contemporary pagan, beliefs have steadily gained popularity since their introduction in the 1960s, the past few years have seen neo-paganism and wiccan beliefs proliferate in mainstream American culture. While reports tell us that organized religion is going extinct in the United States, the rise in neo-pagan spiritualities suggest there might be more to the story of religion’s role in American lives.

According to previous research, this probably isn’t just a fleeting New Age aesthetic trend. Running three large, comprehensive religious surveys from 1990 to 2008, Connecticut’s Trinity College found that the religion of Wicca grew a considerable amount over that period of time. Picking up the baton on this effort, the Pew Research Center found that 0.4 percent of Americans (around 1 to 1.5 million citizens) identify as neo-pagan.

As neo-paganism draws more attention and its associated symbols become marketable, there’s a strong case to be made for recognizing the practice as a legitimate spirituality and understanding more than just its sensationalized aspects like spell casting, herbal charms, and divination techniques. 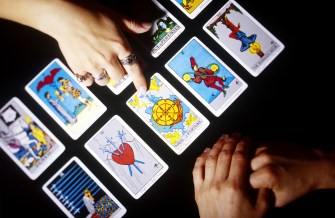 Neo-paganism has proved difficult to define as it is anything but a homogenous religion. Groups vary in size, structure, purpose, orientation, and ritual practices. Although the subgroup of neo-pagans that practice the Craft, or Wicca, and call themselves “witches” have attracted a majority of pop culture attention, it’s important to understand that not all neo-pagans consider themselves witches. In addition to Wiccans, neo-paganism includes groups such as Druids, Goddess worshipers, Heathens, and Shamans. Although it’s difficult to make generalized statements about neo-pagan practitioners given the lack of central leadership and dogma, there are a few uniting principals.

The central underpinning belief that unifies the varied groups is a deep reverence for nature. Often, neo-pagans adhere to animistic beliefs or the notion that inanimate objects such as trees, plants, animals, and natural phenomena are imbued with a living soul. Consistent with the view that all of the natural world is alive, neo-pagans revere the earth as a living being. Traditionally, neo-pagans follow a Wheel of the Year calendar with holy days, or “sabbats,” that harmonize practitioners with seasonal cycles of the earth.

Additionally, neo-pagans also follow a cosmology that understands the universe as an interconnected whole. All beings are linked with all the cosmos as part of a unified living organism. Extending off of the neo-pagan theme of this interconnected universe is a magical worldview, which is most pronounced in Wiccan branches. In short, neo-pagans believe in a universe in which each part of the interconnected cosmos affects every other part. So many neo-pagans believe that magic can be used as an instrument to tap into and influence these links in the universe to bring about some shift in the physical world.

Although there is no single deity, or pantheon of deities, that neo-pagan groups all worship, the immanence of a divine presence that both permeates the natural world and transcends it is typically accepted within neo-pagan groups. While neo-pagans usually worship both a masculine and femine divine, according to Don Carpenter many practitioners put a special emphasis on the concept of the Goddess, or the divine femine, as a metaphor for the divine.

Given the intellectualization of the world and advances of modern science, it might seem a bit counterintuitive for magical and animistic spiritualities to suddenly draw in followers. If a sky god was beginning to seem a bit far-fetched, how is the sacred in the soil any more appealing?

Neo-paganism might well be a reaction against what Max Weber referred to as the “disenchantment of the world” whereby modern life and scientific advancement have drained a sense of the sacred from our lives. Neo-paganism’s use of occult practices reveal sacred, even supernatural, interactions with others in nature, such as birds, rocks, trees, or possibly spirits. This might be something Americans, particularly young people, are craving. At a time when industrialization, toxic consumerism, and environmental destruction seem to be reaching an apocalyptic crescendo, Americans might also view neo-paganism as a sort of spiritual activism by drawing on a “sacred ecology” that seeks to bring a divine found in the earth itself into the lives of practitioners. Through a worldview that finds the sacred in the natural, material world, neo-pagan’s notice, ritualize, and imagine magical interconnections between multispecies’ lives.

Permaculture and the Sacred: A Conversation with Starhawkwww.youtube.com

There is also the tremendous power of the feminist movement. Its rejection of institutionalized, patriarchal religions might account for the specific cultural interest in the Wiccan branch of neo-paganism. By embracing and sacralizing a symbol of an evil, feminized “other” that we were warned of, scholar Howard Eiberg-Schwatz calls the tradition of American witchcraft in neo-paganism an aim at “debunking the otherness of others.” According to the influential Wiccan priestess Starhawk, reclaiming the word “witch” is to reclaim a woman’s right to be powerful and to celebrate aspects of the divine that have been traditionally associated with “the feminine,” such as creativity, mystery, emotion, natural cycles, and regenerative powers. Rising from 17th century ashes and strutting into mainstream American culture, today’s witch is an increasingly visible member of society who might be found sipping coffee out of a “witches brew” mug, flipping through a spell book and tending to an herbal garden.

What is deemed holy reflects the highest values of a society. Ultimately, the rising practice of American neo-pagan spiritualities asks us to consider what changes in cultural values occur when the sacred is found in the earth, symbolized by a great goddess.

Tags
christianitycommunitypaganreligionunited stateswiccanwitches
In this article
christianitycommunitypaganreligionunited stateswiccanwitches
Related
High Culture
Why are flood myths so common in stories from ancient cultures around the world?
Could the prevalence of flood myths around the world tell us something about early human migration or even the way our brains work?
The Future
Space travel will radically change human psychology and spirituality
We are traveling in a realm that once exclusively belonged to the gods. Space travel will force humanity to rethink everything.
The Past
How the death of alchemy gave birth to modern science
Far from practicing witchcraft, the experimentation of medieval alchemists helped bring about the Scientific Revolution.
Thinking
Finding your essential self: the ancient philosophy of Zhuangzi explained
Adopting a healthy scepticism towards inherited ideas means “emptying the container of the Self.”
Starts With A Bang
Science won’t ever make philosophy or religion obsolete
The information we have in the Universe is finite and limited, but our curiosity and wonder is forever insatiable. And always will be.
Up Next
Strange Maps
Behold Sicily’s Mount Etna — its volcanic summit is the world’s only decipoint
The summit of Europe’s most active volcano is also the world’s only decipoint.