Across the U.S., millions of people are still waiting for government coronavirus stimulus checks, frustrated by the technological glitches that rendered the IRS unable to recognize their personal details. Unfortunately, this isn’t unusual when it comes to government projects – the federal government has been struggling for years to master the technology it needs to power advanced, complex actions.

To give one massive example, the Obamacare Health.gov website opened late, overran its budget by close to $800 million, functioned so poorly that only six people in the country were able to select coverage on launch day, and finally crashed for several days because it lacked capacity for the number of users. It was an event which should have been foreseen.

Online voting is being considered with more urgency at a time when the novel coronavirus makes it unsafe for millions to vote in person. Yet while some states and counties offer online voting, others are not even at the pilot stage. The issues with the Iowa state caucus app, which meant that the first, still-confused results weren’t announced until a good 24 hours after voting concluded, is a recent cautionary tale. While this was a problem with just one party’s app in one state, it shows the damage that can be done when election tech goes wrong.

These are just a few especially prominent examples in a long list of past failures. Between 2003 and 2013, some $9.2 billion was lost on custom government IT projects that were eventually canceled because they didn’t work.

It begs the question of why federal digital projects so often fail to deliver. 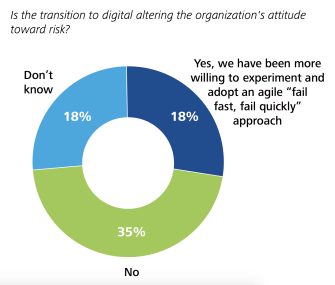 There’s no digital transformation in government

A recent McKinsey report points out that the US government still hasn’t undergone any sort of proper digital transformation. “Overall, US government entities trail organizations in other sectors in adopting digital technologies and approaches,” the report concludes.

For example, the current IRS system uses COBOL, a coding language which hasn’t been in wide use in a decade. It’s a similar issue for unemployment benefits, which are federally run but managed on a state level. The New Jersey state government is seeking people proficient in outdated computer languages to help update the system to cope with the massive numbers registering as unemployed.

Government bodies are suspicious of proposals to switch or upgrade digital tools and processes, creating a growing mass of legacy systems which are inefficient to use and expensive to maintain. Between 2010 and 2017, over $440 billion, or 77 percent of the budget, went on operations and maintenance for legacy systems, leaving less money for modernizing or replacing systems. This is what’s known in the industry as “technical debt.”

Alongside these legacy processes lies a highly risk-averse culture which is opposed to the continuous innovation (CI) and agile “fail fast, fail quickly” mindset necessary for successful digital projects.

Although opposition to digital transformation runs deep, change can be worth it. The United States Social Security Administration (SSA) switched from a traditional waterfall approach to agile development to improve its IT modernization program, which had overrun both budget and timeline and caused user complaints. After the switch, the SSA saved 66 percent on the cost of the program, and exceeded user expectations.

A lack of clear digital strategy is one of the primary reasons why digital projects flounder in uncertainty. Unfortunately, government agency heads are rarely masters of digital tech. They often lack the vision and understanding needed to build a clear digital strategy, which isn’t high on their list of priorities.

In many cases, multiple departments are responsible for different sections of consumer journey, which means that user experience is frequently altered in a piecemeal way, without any grasp of the bigger picture.

What’s more, when there’s no single person in charge of the project, confusing and sometimes conflicting instructions are passed down to those carrying it out. This dogged the Health.gov project. Conflict between staff at the White House and those at the Centers for Medicare and Medicaid Services (CMS) caused the project leadership to be fragmented, which no one acknowledged until it was too late.

The size of the government’s administrative system creates organizational barriers to completing large digital projects. Public sector projects have to jump through hoops of compliance that are intended to prevent fraud, but have the effect of slowing down development and design and enforcing traditional “waterfall” workflows at a time when successful digital projects are increasingly agile.

It’s no surprise that rules and regulations are the most significant obstacle to better procurement practices.

The problem is compounded by frequent conflict between federal and state agencies. In the case of the Obamacare registration site, a number of states initially refused to join and considered building their own versions, which slowed the project down even further.

While this is true across the board, federal projects tend to be larger, have a more diverse range of users, and don’t have the funding or workforce needed to meet their goals.

This spring, the IRS is expected to supply stimulus payments to hundreds of millions of people across the country, but it has only 76,000 employees, compared with 99,500 in 2010. Since 2011, there have been multiple IRS budget cuts, and dozens of experts in the IT department have left without being replaced.

It’s impossible to ignore the impact of the talent gap on federal digital projects. The most talented developers, project managers, and UI/UX experts flow to the private sector, which offers higher pay as well as the “sex appeal” of working on the cutting edge that attracts the most passionate workers.

It doesn’t help that senior government officials are rarely either digital natives or digitally comfortable. Because they’re not familiar with best practices for digital projects, they also often don’t always know what to look for in the hiring process.

It’s the same story for vendors. Out of a lack of training and experience, the agencies procuring contractors don’t always make the best choices. When the project comes to grief, agencies have to change contractors, adding to the money and time costs.

Digital transformation is the only solution

The list of federal technology-based projects that failed to deliver is long and getting longer, a clear sign of the desperate need for federal digital transformation.

It will require a lot of money, time, and effort (just like every digital transformation), but unless we make this move, the U.S. government will continue to lack strategic leadership, widen the talent gap, erect organizational barriers, and generally struggle to deal with projects that are far too large for their restricted budgets to cope with.

Tags
coronavirusdigital transformationgovernmentmoneytechnology
In this article
coronavirusdigital transformationgovernmentmoneytechnology
Related
Which “money personality” are you?
Financial experts explain 4 types of money behavior.
▸
6 min
—
with
Lindsay Bryan-Podvin
3 steps to cure your money anxiety
We’re afraid to talk about money–and that costs us.
▸
7 min
—
with
Kathleen Burns Kingsbury
Why geniuses hunt demons for sport
Jimena Canales shares the “demons” that shaped computer science.
▸
6 min
—
with
Jimena Canales
Videos
NASA astronaut explains humanity’s trajectory to Mars
The first human that isn’t an Earthling could be in our lifetime.
▸
5 min
—
with
Robert Curbeam
The Well
Michio Kaku: 3 mind-blowing predictions about the future
What lies in store for humanity? Theoretical physicist Michio Kaku explains how different life will be for your descendants—and maybe your future self, if the timing works out.
▸
with
Michio Kaku
Up Next
Hard Science
New hypothesis argues the universe simulates itself into existence
This article has been retracted.